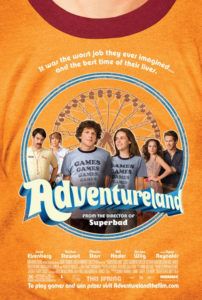 Meaningful coming-of-age comedies like Adventureland come along frequently now, reminding us how many unsuccessful attempts there were in-between this and the last one. It takes the right blend of truth and satire for such a film to work without resulting in corniness or cliché, because so many of these stories have been told already, particularly in the last few years with each one trying to become the sleeper-hit-of-the-year. All of them dwell on those periods in life where plans crumble, the future is uncertain, nothing seems right anymore, and then suddenly everything becomes clear because you’ve fallen in love.

Writer-director Greg Mottola follows in the footsteps of Noah Baumbach’s Kicking and Screaming, centering on the post-commencement funk that often attacks college graduates. James Brennan (Jesse Eisenberg) is a Comparative Literature and Renaissance studies major (sounds familiar) trying to save up money for grad school with a summer job at Pennsylvania’s shoddiest amusement park, where his time is spent cleaning up puke and ogling girls. He’s still a virgin, and likes to disclose that fact on the first date. He believes in being honest for the sake of true love. Perhaps he thinks that will help his chances. It doesn’t.

His heart pulls him toward Em (Kristen Stewart), another melancholy twentysomething stuck running carnival games. She’s smart and sensitive and pretty; their conversations have substance. But his pants thrust him toward Lisa P. (Margarita Levieva), the typical “hottie” other guys his age fawn over, though little is going on with her upstairs. The park’s maintenance man, Connell (Ryan Reynolds), doubles as a ladies man, despite being married, and tells James to feed his urges. Following that advice is another matter, especially since James’ ideal is falling in love before having sex.

Eisenberg presents James as the emotional heart of the movie, playing a “neurotic guy” role that’s been done before and will be done again. Stewart emotes much more than the blandness she offered in Twilight; indeed, she deserves attention for her emotional depth in the role. James’ friends and other background characters provide the film’s humor, however. The park’s management consists of two oddball SNL players, Bill Hader and Kristen Wiig; they rig games and shout at customers, a mild step-up from the usual slack-jawed carnie stereotype. Spaz Tommy Frigo (Matt Bush) insists on delivering a surprise fist to James’ package whenever they meet, which never ceases to be funny. And one decent friend, the Russian literature major Joel (Martin Starr, from Freaks and Geeks), finds James’ indecision between Em and Lisa upsetting.

The most important character, however, remains the park, an already surreal place further enhanced by the film’s 1980s setting. Loudspeakers blare the same songs on a loop—imagine listening to “Rock Me Amadeus” ten times a day. Rickety rides could break at any moment. Employees must wear shirts that read “Rides” or “Games” depending on their job. Customers belittle the workers when given their cheap stuffed-banana-with-googly-eyes prize for winning the lame water-pistol-balloon-pop game. And the bosses expect enthusiasm on the job. No wonder the film’s characters smoke pot and drink like fish.

The subgenre of small comedies laden with evocative truths about early life self-discovery has been tapped all too often as of late. See Rushmore, Garden State, Juno, Little Miss Sunshine, and Rocket Science. Most of them involve awkward young males transitioning from one life station to another, be it through job, educational program, or familial drama. Each ends with an insightful epiphany meant to elicit some ambiguous universal truth about life. And while that formula works, it’s an established recipe that’s slowly becoming ineffective.

Luckily, Adventureland retains romantic poignancy behind its humor, since James is one of those nice guys who usually finishes last but this time doesn’t. Mottola hasn’t repeated the commercial success of his previous film, the similarly-themed raunch-fest-with-a-heart Superbad. Contributing more than bawdy humor, which is there, just in a lesser abundance, his film here is more subtle and affecting, something described as “true” by the right audience. The story seems to come from Mottola’s experience, no doubt himself being a guy like James looking back after having his own such epiphany.