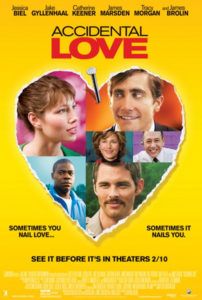 Had Stanley Kubrick or Billy Wilder not been such master practitioners, Dr. Strangelove or One, Two, Three might not have been the broad but carefully modulated political farces they are. Delivering satire at this level of comic audacity, while also maintaining artistic integrity, requires a careful directorial hand. Such balance does not exist for Accidental Love, though it was delivered, at least in part, by one of today’s most accomplished directors. In the last five years alone, David O. Russell has achieved much artistically and commercially with his Oscar favorites The Fighter, Silver Linings Playbook, and American Hustle, which says nothing of his earlier breakthroughs on Flirting with Disaster, Three Kings, and I Heart Huckabees. And though it contains moments of Russell’s exceptional interplay of character chaos, Accidental Love feels like the work of another filmmaker.

Perhaps that’s why Russell had the good sense to remove his name and replace it with the pseudonym “Stephen Greene,”. Originally titled “Nailed,” the 2008 production halted several times when financiers failed to follow through with necessary budget costs. Russell grew frustrated by the delays and, in 2010, officially moved on to bigger and better things, such as restarting his career with The Fighter. In the interim, someone else took over for Russell and completed the shoot on the quite lifelessly renamed Accidental Love, which sounds like something that should star Meg Ryan circa 1994. It was released on VOD first and then hit theaters in very limited release. And while precise credit (or should it be blame?) cannot be attributed to anyone given the legal issues that continued to delay shooting, editing, and release after Russell’s departure, Russell’s name should not be associated with the film—and isn’t in any official capacity—apart from the moments where his signature orchestration of cramped, multi-character frenzy is evident onscreen.

Kristin Gore (daughter of former Vice President Al) wrote the script based on her own 2004 novel Sammy’s Hill; Matthew Silverstein and Dave Jeser also received screenplay credit. It becomes clear early on that the filmmakers had the screwball farces of yore in mind, particularly those of Preston Sturges and Howard Hawks. The story opens in a small, back-to-the-’50s Indiana town where roller-waitress Alice (Jessica Biel) ends up with a nail lodged in her skull just as her policeman fiancé (James Marsden) proposes over dinner. When she’s rushed to the hospital, the doctor (Bill Hader) refuses to remove the nail because she has no medical insurance, and the procedure costs $150,000. And though she could easily sue the restaurant, she instead slips into bouts of mania, depression, lust, and random Portuguese. Finally, after a botched at-home surgery by a drunk veterinarian (Kirstie Alley), she heads to Washington D.C. to convince her congressman, Howard Birdwell (Jake Gyllenhaal), to sponsor a bill that would cover emergency surgery for all Americans.

Joined by a priest with a constant, pharmaceutically-maintained erection (Kurt Fuller) and his friend with a collapsed anus (Tracy Morgan), Alice’s sexual vibes draw Howard, whose House Whip (Catherine Keener) wants to build a base on the Moon, a plot point not worth getting into during this review. Howard agrees to help Alice with her new bill if she supports his political causes. After all, she has a lot of media sympathy for her whole nail-in-the-head situation. But, to go over any more plot would be useless; you get the idea by now. The farce gets more farcical with each scene, including an enraged gang of preteen girls, a masculinity camp, a funeral, an outlandish session of Congress, and a wedding. Let’s not forget the obligatory group dancing scene and outtakes over the end credits. And it all might not seem so terrible, except John Swihart’s score is such a generic assembly of discarded notes from It’s Pat: The Movie and Stuart Saves His Family that it cheapens everything on the screen. Worse, the actors often feel like they’re in a bad SNL skit that has gone on too long.

Descriptions like “big” and “over-the-top” fail to capture the MAD Magazine quality of everything onscreen in Accidental Love, leaving the viewer to watch the zaniness with curiosity, in hopes of finding what it is that made these actors join the production (others, like James Caan, left the production along with Russell; Caan was replaced by James Brolin). Biel, Gyllenhaal, Keener, Marsden, and co-star Paul Reubens each have their own celebrity to thank for making an otherwise tepid political commentary somewhat watchable. Though, it’s nowhere near other political-comedy fare such as Armando Iannucci’s In the Loop or HBO’s Veep, whereas the physical comedy goes far beyond slapstick. Moreover, the material feels dated in the wake of recent healthcare solutions, and its genre devices were tired twenty years ago. Aside from momentary chuckles (the fake PSAs and YouTube videos used in the film are hilarious), the weakness of the film’s overall plot spoils its few genuinely funny individual moments and performances. Whatever group of filmmakers took over after Russell left the project, they didn’t find a consistent mark at which to set their comedy dial, though most of the time, it’s set to eleven, blaring in our faces.