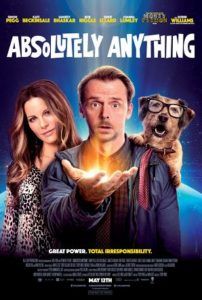 Eric Idle wrote the lyrics to “Galaxy Song” for Monty Python’s The Meaning of Life, in which he sang, “So remember, when you’re feeling very small and insecure/how amazingly unlikely is your birth/and pray that there’s intelligent life somewhere out in space/’cause there’s bugger all down here on Earth.” Turns out, there’s bugger all in space too. The intelligent life in Absolutely Anything, a very silly comedy from another Monty Python member, Terry Jones, consists of the Galactic Council of Supreme Beings. Its enormous, bickering, and beaked members are rendered with the movie’s typically lousy CGI and voiced by Jones, Idle, and other members of the British troupe: John Cleese, Michael Palin, and Terry Gilliam. Together, they measure Earth’s worthiness to become councilmembers by giving an average human dope the power to do whatever he wishes. If he does good, then Earth will be admitted; if he does evil, the Earth will be destroyed.

How any alien race can bestow omnipotent wish-powers defies even the most outlandish sci-fi logic, but then, Absolutely Anything is an absurdist movie. The irreverent, intergalactic humor reminded me of Douglas Adams’ Hitchhiker’s Guide to the Galaxy; in fact, Jones and his co-writer Gavin Scott showed their script to Adams for input. Prior to the film’s production in 2014, Jones and Scott had worked on the idea for about twenty years. Their screenplay borrows a lot of ideas from other material, such as Adams’ work or H. G. Wells’ The Man Who Could Work Miracles. The scenario also recalls Bruce Almighty, though the treatment is far edgier here. Despite the wealth of comparisons to be made, the resulting movie isn’t about exploring an original concept or even delivering an exceptional display of sci-fi production values; it’s about (surprise) making the audience laugh.

Simon Pegg stars as Neil, the pathetic earthling suddenly bestowed with unlimited wishes by alien overseers. A teacher and would-be novelist, Neil pines after his neighbor Catherine (Kate Beckinsale) and hates his boss (Eddie Izzard), and wishes to solve both problems. Once he receives his new powers, Neil needs only to waive his hand and make a wish for something to become a reality, often in a hilariously literal sense. This makes for a horrific turn when he wishes “Let everyone who died be alive again,” the keyword being everyone, the result being zombies. Or take when, while walking down the street, he wishes himself to be President of the United States—within a few seconds, random citizens begin opening fire and he’s rushed into a limousine by Secret Service. Shifting from slight political satire to sexual humor, Neil ponders what might happen if he had a penis women actually desired: “Great, now make it white,” he orders. Later, he wishes his dog’s accident would clean itself up, resulting in an animated poo leaping up off his carpet and skipping its way into the toilet.

Speaking of Neil’s dog, the movie’s original title was “The Dog Who Saved the World,” which uses a title format uncommon in today’s spoiler-wary world. Voiced by the late Robin Williams, the dog, named Dennis, offers a charmingly simple take on the thoughts of a canine (until Dennis confesses that dogs don’t actually enjoy having their tummy rubbed—they pretend to enjoy it because humans seem to enjoy doing it). Less humorous is a subplot involving Rob Riggle’s American military man who’s obsessed with Catherine. Rigger, never one for subtlety, creeps after her in a stalkerish way, if only to propel the story. Eventually, he learns of Neil’s abilities, kidnaps him, and forces him to do his bidding. It’s a dumb and predictable conflict. Fortunately, Jones and Scott have embedded a lot of laugh-out-loud bits into the events, and Pegg, though over-the-top as the material requires, has sharp comic timing.

Absolutely Anything opened in the U.K. in 2015, and distributors haven’t been in a rush to release it stateside. It’s understandable; there are a lot of things about the movie that don’t work, from the cheap-looking aliens to the corny CGI used to make Dennis’ mouth move. Even so, I found myself ignoring the many underwhelming details of the production because it kept me amused. Much of the cast consists of talented comedians in limited roles, and the humor ranges from raunchy to occasionally witty. The jokes are well-timed and set in a familiar tone that echoes both Adams and Monty Python. And though the movie’s story is rather dim and uninvolving—and it plays like a comic sketch that goes on too long—the individual jokes and exploration of the basic setup are fun. Absolutely Anything may be a bad movie, but I laughed a lot, and really, that’s what Jones and company set out to accomplish.