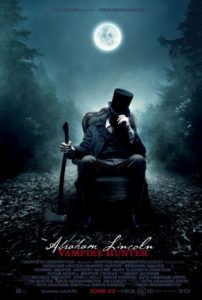 In 2009, author Seth Grahame-Smith popularized a mashup subgenre where he blended classical literature with horror in his successful book Pride and Prejudice and Zombies, a satiric and wryly amusing post-modern effort followed the next year by the equally wry history-horror mashup Abraham Lincoln: Vampire Hunter. Imitators like Ben H. Winters’ Sense and Sensibility and Sea Monsters and Android Karenina would follow. For a casual read, why not? And with titles like these, how could they not have a sense of humor or not prove to be escapist fun? But there’s nothing funny or enjoyable about the movie based on Grahame-Smith’s second book, produced by Tim Burton and directed by Wanted helmer Timur Bekmambetov. This utterly humorless interplay between vampire carnage and our 16th president’s life story takes itself very seriously, and the outcome, marked by Bekmambetov’s over-stylized approach, doesn’t share the cleverness of its title.

No one expects a history lesson from a movie like this; thus, the story plays like a highlight reel of Lincoln’s legend, revealing how our greatest president’s most important decisions were actually fuelled by his desire to kill vampires. As a boy, young Abe’s mother was murdered by a nasty bloodsucker, and later, as a vengeful young man (now played by Benjamin Walker), he haplessly sets out for revenge. Botching his initial encounter with a vamp, Lincoln is saved by vampire hunter extraordinaire Henry Sturgess (Dominic Cooper). Sturgess teaches Lincoln how to channel his thirst for revenge into superhuman physical powers against those who thirst for blood. Lincoln soon moves to Springfield, falls for Mary Todd (Mary Elizabeth Winstead), gathers a couple of sidekicks (Anthony Mackie and Jimmi Simpson), becomes interested in politics, and before you know it, the movie is smack-dab in the middle of the Civil War. But the Civil War is not so much about abolishing slavery as it is an epic battle between humans (the Union) and vampires (the Confederates), the latter group led by an ancient neck-biter named Adam (Rufus Sewell), who is bent on claiming America for the vampires.

The cult popularity of Grahame-Smith’s books all but packed his bags for Hollywood, although his adaptations of his own novel here and his earlier script for Burton’s Dark Shadows do not bode well for his future. Both are misguided, unfunny horror mashups that seem unsure of themselves tonally. Are we supposed to be laughing? Are we supposed to be thrilled? Who knows. And only the directors of these projects seem even more unsure than Grahame-Smith. Bekmambetov tries to balance elements of historical biopic, Blade-esque vampire yarn, bits of romance, wartime drama, and superhero story archetypes into one movie. Not one of these elements is successful. It’s all punctuated by Bekmambetov’s in-your-face overreliance on derivatively styled action sequences, most borrowed from Zach Snyder’s slow-down-then-speed-up handbook, and all edited into mincemeat. How many times can one movie show its hero twirling an ax like a baton to decapitate countless vamps? Or performing elaborate acrobatics in slow-mo? How many vampire movies must it take before Hollywood realizes no one wants to see those CGI-widened vampire mouths, extended vertically like a stretched balloon (see the Fright Night remake for another example)?

Bekmambetov is praised in some circles for his highly visual approach to film-making. His style is certainly distinct, but its characteristics aren’t necessarily admirable. His other vampire films, Night Watch (2004) and Day Watch (2006), suffer from the same excess of energy as this film, and some mistake wild camera angles and visual trickery for great directing. Where’s the story, I ask? Even on a purely visual level, Abraham Lincoln: Vampire Hunter looks awful. Although I avoided the (much disgraced) post-converted 3-D version and saw the film in 2-D, the intentional fog and dust-laded action sequences make for an unintelligible viewing experience even without darkening 3-D glasses. Consider a sequence where Lincoln chases his mother’s murderer Barts (Marton Csokas) through a stampede of horses. Not only is this sequence hard to make out because Bekmambetov has veiled every shot with CGI dust kicked up by the horses, but the action proves doubly absurd as Lincoln leaps on the animals’ backs to dish out his revenge. The climactic train sequence is just as impossible to see because of an excess of fog, fire, and the muddied lensing by Caleb Deschanel.

Aside from a story novelty that may draw some (unfortunate) curious viewers in, Abraham Lincoln: Vampire Hunter feels like a missed opportunity for a cult classic. Walker gives the only standout performance amid the cast, and he bears a striking resemblance to a young Liam Neeson, who, interestingly enough, was once cast to play Lincoln in Steven Spielberg’s forthcoming historical biopic titled Lincoln (Daniel Day-Lewis replaced Neeson). Regardless, no performance will make up for the tonal disaster that ended up onscreen. Instead of laughing at this movie, we could have been laughing with it and enjoying the experience rather than despising it. But Bekmambetov forgoes the obvious absurdity of the subject matter and resolves to make an actionized horror movie that wants to wow us. Instead, we just sit back thinking how silly the story is, how dreadful the presentation looks, and how uninvolved we are.