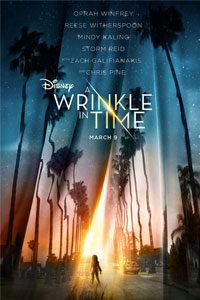 Ava DuVernay directs the adaptation of Madeleine L’Engle’s celebrated 1962 novel, A Wrinkle in Time, and delivers a Disney tentpole filled with oppressive, eye-popping CGI and a conspicuous reliance on extravagant makeup and production design. With thoughtful and stylistically subtle films like Selma (2014) and the documentary 13th (2016) to her name, DuVernay’s work here seems comparatively hollow and superficial, as most directors’ first megabudget Hollywood projects often are. Although she has gathered a roster of talented actors and spared no expense bringing the story to life, DuVernay’s adaptation seems more interested in creating a spectacle out of the fantasy elements from L’Engle’s book, as opposed to making those elements work for cinema. Along with some rough child performances, the film’s visual and tonal approach has been pushed to erratic limits, overriding and distracting from the characters at its center.

DuVernay goes after the quality of 1980s fantasies like Labyrinth (1986) or The Adventures of Baron Munchausen (1989)—stories about adolescent girls taken on a wondrous trip to far-off places, where around every corner another wacky puppet character or mind-boggling dreamscape waits to be discovered. Except, instead of puppets, here we get celebrities like Oprah Winfrey, Reese Witherspoon, and Mindy Kaling donning silly Eiko Ishioka-lite costumes, multicolored makeup, and splendorous hairdos that change from scene to scene. And rather than elaborate set-pieces, the digitized backdrops create an observable separation between characters and their worlds. While in the past similar fantasy films explored topsy-turvy worlds in which the laws of physics and reason don’t apply, A Wrinkle in Time is far less enchanting. Moreover, the abrasive visuals represent such a shock to the moviegoer’s system that one feels exhausted afterward, though not in the satisfying way one felt after, say, Max Max: Fury Road (2015).

During the early scenes, DuVernay and cinematographer Tobias Schliessler shoot in confined spaces and natural lighting to establish the film’s young heroine, Meg Murry (Storm Reid), and her limited worldview. It’s been four years since Meg’s scientist parents (Chris Pine and Gugu Mbatha-Raw) toyed with the idea of a tesseract—a device to fold time and space to travel great distances, hence the verb to tesser—resulting in the disappearance of her father. In the interim, the bookish Meg has developed a number of insecurities and amassed a few bullies due to the lasting ache of her father’s absence. One evening, without warning, a wispy-looking being named Mrs. Whatsit (Witherspoon) appears in Meg’s living room and seems well-acquainted with her 5-year-old brother, Charles Wallace (Deric McCabe), a child prodigy. Meg later meets Mrs. Who (Mindy Kaling), an entity that speaks using famous quotations of Earthling origin (just once, it would have been nice to hear from the philosophers on Frolix 8). Eventually, despite Meg’s initial resistance, Charles Wallace and his new friends invite Meg to help find their missing father somewhere in the universe by tessering, which is more about finding a wrinkle in space, not time. Meg’s accessory-of-a-friend Calvin (Levi Miller) joins them. 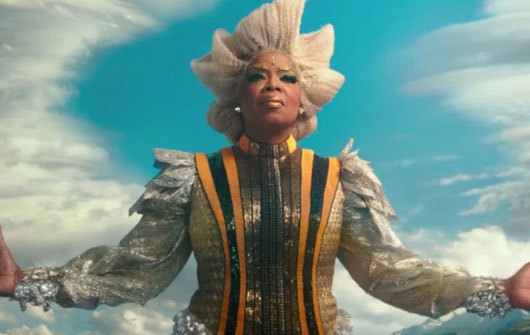 At this point, A Wrinkle in Time shifts from cramped, uninteresting spaces to blinding sunshine and digital backdrops as Meg gradually buys into the fantasy nonsense (seeing Winfrey as Mrs. Which, a majestic, 20-story entity with bedazzled eyebrows, helps convince her). The transition is stark, like the shift from black-and-white to color photography in The Wizard of Oz (1939). Everything is suddenly floating flowers that “speak in color” and Witherspoon morphing into a plant dragon—that is, until they meet the source of all evil, which is bound to spoil anyone’s good time. Called “The It” (not to be confused with the evil clown in last fall’s popular Stephen King adaptation), evil appears as black, tendril-laden goop that inhabits a planet called Camazotz (The Nothing from 1984’s The NeverEnding Story comes to mind). That’s where Meg’s father is, of course, requiring Meg and her two young sidekicks to venture into trouble without the help of their magical space ladies.

The film takes place in a universe where the rules, and tones, seem to be made up along the way, which leaves the viewer in a state of disarray, unable to connect with the rather lifeless characters. As all-knowing, overdressed superbeings, Winfrey, Witherspoon, and Kaling (later joined by Michael Peña and Zach Galifianakis) have little to do, besides provide exposition and words of encouragement for Meg (“You’re a warrior,” they tell her). Reid provides some heart, especially in the tear-filled climax, but her emotional arc of self-actualization and ownership of her faults is a familiar trope. McCabe fumbles in his precocious child acting, especially in scenes where Charles Wallace has been overcome by The It. If nothing else, the writers should have altered the ending to make Calvin the source of evil. (Viewers familiar with the underseen Better Watch Out (2016) will find it difficult to see Miller as anything but a psychopath, which brings an eerie extratextual layer to the watching of A Wrinkle in Time.)

Writers Jennifer Lee (Frozen) and Jeff Stockwell (Bridge to Terabithia) have failed to adapt the material by not keeping the last twenty years of derivative fantasy adventures in mind. And so, A Wrinkle in Time often feels overly familiar, like every other PG-rated fantasy mentioned in this review. DuVernay and the Disney machine have tried to compensate by turning L’Engle’s otherwise beloved story into a candy-colored hodgepodge ornamented with glittery lipstick and ridiculous computer FX. Worse, the presence of songs by Chloe x Halle, Kehlani, and DJ Khaled with Demi Lovato threatens to transform their respective sequences into music video moments. DuVernay attempts to insert dazzling visuals in place of our need for heartening characters and situations, leaving this otherwise promising blend of source material and talent splashed with rainbow colors and well-meaning but forced messages of empowerment.