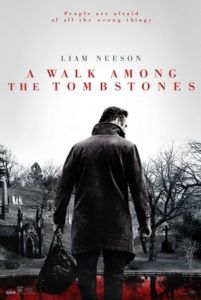 However tired Liam Neeson’s recent action hero typecasting has become, A Walk Among the Tombstones presents the actor’s tough guy presence in a smart, straightforward kind of thriller, albeit capably made. From author Lawrence Block’s best-selling series about unlicensed private detective Matthew Scudder, the film adaptation written and directed by Scott Frank handles the material with class and integrity, and hopefully launches another Neeson franchise. Block’s first Scudder book, The Sins of the Fathers, debuted in 1976, but A Walk Among the Tombstones was his tenth entry (out of sixteen novels and a short-story collection) and not the first put to film. Hal Ashby made the bomb 8 Million Ways to Die in 1986, starring Jeff Bridges, and perhaps its negative response is why we haven’t seen Scudder appear onscreen since.

Fortunately, Scott fares better, having versed himself in twisting crime stories, from his screenwriting efforts with Dead Again (1991) and Out of Sight (1998), to his superb directorial debut with The Lookout (2007). His choice of Neeson, who Block personally approved, allows Scudder to carry an appropriate weight on his shoulders and pain on his brow. In a 1991 prologue, Scudder unleashes fury on three robbers dumb enough to hold up a cop bar; he kills two of them and wounds another, and because he was drunk when it happened, he’s never forgiven himself, despite his accommodations for the act. This is a man of grave morality, who religiously attends his AA meetings and follows the steps closely. The film takes place in New York City in 1999, with the threat of Y2K just around the corner. Scudder describes his unofficial detective duties as follows: “I do favors for people, and in return, they give me gifts.”

Scudder’s case begins when Peter (Boyd Holbrook), an AA acquaintance, brings him to see Kenny (Dan Stevens), Peter’s wealthy drug-dealing brother. Kenny’s wife was kidnapped, and when he paid the kidnapper’s ransom, they delivered her back in bags. Kenny wants to find the killers and deal with them outside of the law. And normally, Scudder wouldn’t take a case involving a drug dealer, but he learns that the killers may have done this before to another crime lord of Kenny’s ilk, and chances are they’ll do it again. His investigation leads him to a weirdo Green-Wood cemetery groundskeeper (Ólafur Darri Ólafsson) who worked with the killers on one of their kidnappings but got scared and ran. Meanwhile, the serial killer duo (David Harbour and Adam David Thompson) scouts their next victim, the teenage daughter of a Russian dealer (Sebastian Roche).

Frank’s script pares down Block’s novel to emphasize Scudder’s lone wolf status, removing many of the book’s supporting characters. Scudder had an ex-prostitute girlfriend, a wise bartender friend, and an AA sponsor in the book; all of them are gone here. Instead, Frank softens Scudder’s rugged edge by allowing him to take on a young derelict apprentice, TJ (Brian “Astro” Bradley), a smart street kid who fancies himself a would-be Sam Spade or Philip Marlowe. Scenes where TJ deals with his sickle-cell anemia and probes Scudder for what it takes to be a good detective (“A large bladder,” he responds) are quietly enjoyable but seem to drag and slow the thriller momentum. Had Frank wanted to build a character study, Scudder’s other friends would have been a more appropriate inclusion.

Nevertheless, the production oozes atmosphere, having shot on location in rough NYC neighborhoods like Red Hook and Sunset Park. Cinematographer Mihai Malaimare (The Master), delivers a clean image of moody and grim colors and, when the scene calls for it, unique angles. But the visuals become perhaps overly self-conscious during the climactic shootout, where a freeze-frame effect pauses the action to read the 12-steps, applying them to how Scudder conducts himself on the job. And by the end, we’re not really sure what was going on with the two killers. Were they lovers? What was going on in their truly messed-up heads? The script alludes to them being somehow associated with the DEA; ejected officers, maybe?

That Frank chose to explore Scudder’s relationship with TJ over the film’s antagonists was easily the biggest misstep of his adaptation, but it doesn’t harm A Walk Among the Tombstones beyond repair. After all, this is Neeson’s show. Now in his sixties, the actor’s world-weary eyes and sort of hunched, deliberate posture better serve a plagued man like Matthew Scudder than his superhero character from Taken, Taken 2, and the upcoming third entry due in 2015. Watching the actor scour the mean streets for clues, growl threats into a phone, and take down bad guys never really gets old. In Neeson’s hands, Scudder becomes a throwback hero to film noirs of the 1940s and 1950s, except in a grisly crime setting reminiscent of Se7en. It’s an appealing, engaging, and solidly assembled picture with style to spare, and here’s hoping it’s not the last time Frank and Neeson bring Scudder to the screen.