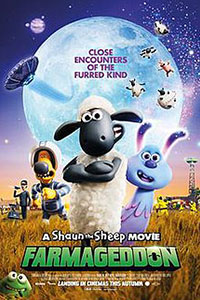 Title notwithstanding, A Shaun the Sheep Movie: Farmageddon does not involve an asteroid hurtling toward Earth, requiring the hero of Aardman Animation’s Mossy Bottom Farm to partake in a world-saving mission to detonate it. The movie’s most impressive special effect is how the studio manages to create an effortlessly charming sequel to 2015’s Shaun the Sheep Movie, and the associated television series, with almost no dialogue at all. Shaun the Sheep might be the closest character, animal or otherwise, we have today to a silent film star, and his two movies could make an argument for the power of purely visual storytelling for the unconvinced. Aside from far too much referential humor and an overuse of montages set to pop music, the movie’s dependence on sight gags, slapstick, and precise character descriptions through pantomime remains ingenious. The material may not rise to Aardman’s Wallace & Gromit heights, but it’s a modest improvement on their last feature, Early Man (2018).

Farmageddon is a story about an alien arriving on Earth and causing a commotion on the English countryside. A cute amalgam of a puppy and a squid, Lu-La arrives in a spaceship and startles a local man, who alerts the authorities to the presence of UFOs and aliens in the region. Not long after, a Woman in Black arrives to investigate, accompanied by a WALL·E-style robot and anonymous agents in hazmat suits. Before long, it’s apparent the filmmakers have resolved to replicate the structure of Steven Spielberg’s E.T. the Extra-Terrestrial (Shaun, Lu-La, and E.T. even sound alike when they scream). Nevertheless, it’s Shaun and his fellow sheep who endeavor to help Lu-La phone home. Their eyeless farmer’s beleaguered guard dog Bitzer even takes a break from enforcing his strict policies—each represented with a hand-drawn sign warning “no frisbees” or “no daredevil stunts” in pictorial terms—to help their efforts.

About the time the viewer realizes Lu-La is just a child who accidentally took the parents’ spacecraft for a spin without their permission, the farmer concocts a silly plan to erect an impromptu theme park called “Farmageddon,” promoting the crop circles that have recently appeared in his field. This leads to a climax involving plenty of broad physical humor and no end of inspired stop-motion feats. Even though Laika has surpassed Aardman at this point, the level of craft on display remains astounding. It’s also a pleasure to watch simple, unironic humor for a change. At one point, the government agent after Lu-La chases Shaun and the alien up the farmer’s theme park tower. They try to slow her down by dropping letters from the “Farmageddon” sign on her. As each wooden letter hits her, she cries out in pain in the sound of the corresponding letter. “Eff” then “Ah” then “Ar” and so on. Forget the added sci-fi accouterments; it’s this sort of timeless humor and every-man wit that’s appealing in family entertainment. 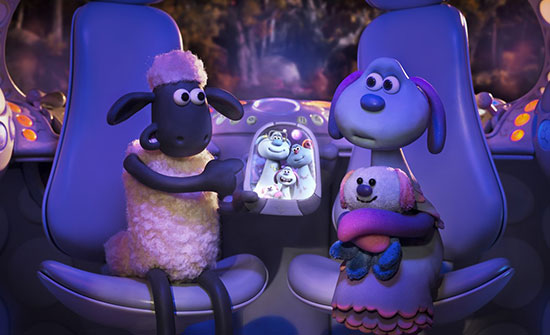 Longtime animators-turned-directors Richard Phelan and Will Becher break the material’s stop-motion precedent a few times for scenes in space, where celestial bodies have been rendered with computers. The rest, however, employs Aardman’s standard stop-motion, complete with the occasional fingerprint on claylike flesh and evidence of wool moving between snapshots during the rigorous animation process. Besides a few CGI space scenes and the glowing from Lu-La’s alien powers, the rest has a laudable handmade quality that endears the viewer to it. By contrast, Lu-La’s presence defies the usual Shaun the Sheep look to appear, well, alien. Fortunately, the story offers a gentle theme about the kindness of and for strangers, which cannot help but double as a commentary on our increasingly xenophobic world.

On the other hand, Mark Burton and Jon Brown’s screenplay might just be making an open-faced reference to E.T., as there’s a lot of that going on in Farmageddon, and usually with a wink toward adult viewers well-versed in science-fiction. Spielberg’s Close Encounters of the Third Kind and Jaws also emerge alongside other genre references to Alien, Dr. Who, The X-Files, Star Trek IV: The Voyage Home, and several to 2001: A Space Odyssey—not to mention every other Aardman property and assorted literary references (such as the local auto shop called H.G. Wheels). They even evoke the Amblin logo. Younger viewers will probably miss these details, whereas they feel oppressive for aficionados who can spy them in every major scene. And while most of these nods are fun, about a third of them would have sufficed. The same can be said of the soundtrack that muddies the nonverbal proceedings with hip songs by the Chemical Brothers, Jorja Smith, and The Vaccines, each placed as an interlude in the wordlessness.

Though bogged down by some of these attempts to seem modern, Farmageddon is best when it relies on smaller moments and simple humor. The occasional bare bottom and Earth-shaking belch prove downright hilarious too. The film’s enduring message about acceptance and curiosity toward aliens cannot help but feel political, but perhaps that says more about our world today than what the filmmakers intended. After all, had Spielberg released E.T. today, it would doubtless be seen as a parable for immigration. Yet, underneath the glut of references and cloying soundtrack, there’s something universal about Farmageddon, albeit to a lesser degree than the show or previous movie. Perhaps to make up for Early Man‘s box-office disappointment, Aardman resolved to go commercial with this sequel, offering a familiar genre treatment. Somewhat less inspired and original though it may be, it’s still full of comic pleasures and generous heart.