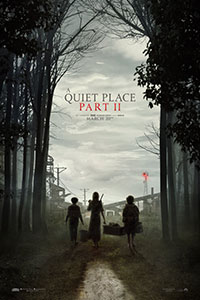 A Quiet Place Part II was one of the first major films delayed due to the COVID-19 pandemic. Originally slated to premiere in March 2020, just about when people started going into quarantine, its release date fluctuated over the last year until the world started to resemble normalcy again. When the sequel to director John Krasinski’s A Quiet Place finally opened, the reception was positive but not overwhelming. That could be because fourteen months of build-up creates unreasonable expectations. Or maybe it’s because, after just two entries, Krasinski’s two films already resemble a television series. Similar to its predecessor, Part II tells a modest story, offers a few scant details about the surrounding world, focuses primarily on crafting suspenseful situations, and leaves room for a sequel with a cliffhanger ending. After waiting so long, it cannot help but feel like episode two of an ongoing show instead of the cinematic event of the year. That’s true of many big-screen franchises, I suppose. Nevertheless, it’s an entertaining follow-up to the 2018 original.

Once again, the story centers on the Abbott family. If you recall, the paterfamilias, Lee (Krasinski), died in the first entry. But Part II opens with a flashback to “Day 1,” which finds Lee attending a local little league game with his wife Evelyn (Emily Blunt) and their three children. Then, something ominous streaks across the sky at an eerily slow pace. The alien invasion has begun. As townsfolk race back to their cars, scared and confused, the creatures attack. You remember them, right? They’re crab-things with no eyes, protective exoskeletons, a mouth full of razor-sharp teeth, and cavernous ears that pick up the slightest sound. The opening sequence is a sharply directed hunk of monster chaos, complete with extended shots that follow the action and jump-inducing scares. But the scene does little else than remind us of Lee’s heroism and establish a supporting character, a townie named Emmett (Cillian Murphy), who will appear later.

The screenplay, credited just to Krasinski this time around, then returns the viewer to “Day 474,” after most of humanity has fallen, where the first movie ended. Now it’s just Evelyn, her newborn baby, and the two eldest children left—the courageous Regan (deaf actress Millicent Simmonds) and high-strung Marcus (Noah Jupe). After killing aliens in the cliffhanger ending of the first movie, the remaining Abbotts quietly head toward the nearest fire signal, where they find Emmett hiding in an old mill. Having lost his wife and child, the grief-stricken Emmett doesn’t want the Abbotts around. Regan thinks he’s a coward, and after finding a radio signal playing Bobby Darrin’s version of “Beyond the Sea,” she decides to follow a hunch and look for survivors on a nearby island. The story then fractures into two halves, one following Regan and Emmett on the road, the other Evelyn and Marcus in the mill with the baby. 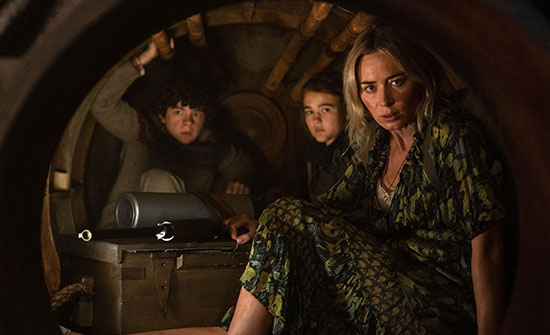 Krasinski embraces tried and true ingredients of the post-apocalypse genre. Those familiar with the video game The Last of Us may see similarities in the relationship that develops between the rugged Emmett and defiant Regan and the game’s Joel and Ellie. Of course, Emmett’s earned distrust of the world and fear of running into the wrong kind of people is validated, but then so is Regan’s hope for a safe haven. Elsewhere, Blunt has less to do this time around; Krasinski reduces her role to the protective mother who enables her children to mature. This means more time with Marcus. And if you’re versed in the post-apocalypse genre, or real life for that matter, you know that teens tend to make stupid decisions and get themselves into trouble. The same is true here. Still, both Regan and Marcus have moments that show them growing into the example set by their late father, and there’s a heartening glimmer of recognition in Evelyn’s eye when she sees this.

As expected, A Quiet Place Part II ratchets the tension through intense situations, offering a few character nuggets and world-building details along the way. But Krasinski’s main objective seems to be creating a suspense machine. He accomplishes this using obvious techniques, especially in the scenes involving Evelyn and Marcus at the mill—a repeat of the claustrophobic tension used in the first movie. He also dwells on details that will become crucial later: An air tank gauge. A water leak. A sealed metallic tube with a digital timer for when the air inside expires. A nasty injury, involving Marcus and a bear trap, that could get infected. These time-sensitive elements conspire to turn the last half into a suspenseful if predictable succession of countdowns and things-gone-wrong. By contrast, the scenes with Regan and Emmett have a sense of discovery and feel like they’re taking the story in a different direction.

Having proved himself with the 2018 movie, a hugely profitable release for Paramount that made $350 million worldwide on a $22 million budget, Krasinski allows himself to embrace the silence. This time around, Marco Beltrami’s score feels recessive and less likely to punctuate the action. Krasinski trusts his audience more, allowing whole sequences to unfold in a silence that captures Regan’s deafness. Fluidly shot by cinematographer Polly Morgan, the sequel looks fantastic and has been composed by a filmmaker who clearly understands how to manipulate his audience. But like its predecessor, Part II still boasts some forgettable CGI creatures, which get more screentime in the sequel and occasionally look cheap. They also raise pesky questions of story logic. The now-standard cliffhanger ending, too, feels deeply unsatisfying. Regardless, the experience delivers 97 minutes of edge-of-your-seat thrills. Just don’t expect to think about it much until Part III comes along.