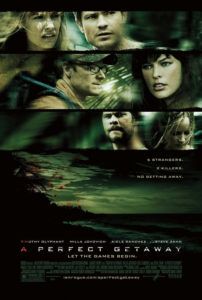 A Perfect Getaway talks endlessly about plot formula and standard movie set-ups, outlining Hollywood screenwriting devices until the viewer becomes familiar enough with them to expect what’s coming. But then the movie does something clever; it uses those recipes against us even after making us aware of them. It’s a smart enough thriller to work passed its standardized plot, fool its audience, and deliver one helluva punch in the final act.

It involves newlywed couple Cliff (Steve Zahn) and Cydney (Milla Jovovich) on their honeymoon to the picturesque Hawaiian island of Kauai. When they arrive, they put half a camping supply store on their backs and head to a remote trail. As they pull away in their rented jeep, the camera zooms onto the newspaper under their tire. The headline warns that murderers are on the loose. It’s a rather silly way to introduce a conflict, especially for a script that seems so aware of movie truisms. But nevermind that.

What the movie wants us to know is that the suspects are a man and a woman. And wouldn’t-you-know-it, our heroes encounter two couples on the road. One pair are hippie hitchhikers Cleo (Marley Shelton) and Kale (Chris Hemsworth), who make it very clear they don’t care for our heroes’ yuppie rental and snobby attitudes. The other couple are nice-enough weirdoes Nick (Timothy Olyphant) and Gina (Kiele Sanchez). He’s a former black-ops soldier, fully equipped with a bow and arrow, killin’ knife, and metal plate in his head to prove it; she’s a southern-fried lass who can gut a wild goat if need be. Which two are the killers?

In the enjoyable dialogue, Cliff talks about how he’s becoming a bonafide screenwriter, and Nick keeps up the conversation with this enthusiastic knowledge on the subject. They talk about “Red Herrings”—devices used to divert your attention—and “Second Act Twists” forcibly entered into most screenplays nowadays. Of course, those devices exist here too. But that’s where the plot description stops. Discover how the diversions and twists and turns play out for yourself. They’re worth it.

Written and directed by David Twohy, whose Pitch Black and Below prove the filmmaker has a thing for B-movies, this paradise-set yarn gets by on the talents of its small cast and the humor embedded into the script. Without them, it would fail rather quickly. For once, Zahn doesn’t play a doofus, and Jovovich isn’t a genetically altered super-being (see The Fifth Element or the Resident Evil movies). They’re doing some real acting here, and it’s welcomed. The standout, however, is Olyphant, whose intense eyes and wry smile quickly make his character likable but suspicious—he had that same appeal on Deadwood. Sanchez does mighty fine with her southern drawl too. All of the actors make the script come alive, giving it needed personality, so the audience doesn’t stop to think about what doesn’t make sense.

The experience doesn’t last. You’ll pick it apart on the way home, thinking about how silly the extended flashback scenes were, or how the finale becomes choppily edited like a generic thriller. But you won’t be able to deny how engrossed you were throughout, how well Twohy keeps you guessing, or how realistic the characters feel for a time. A Perfect Getaway is brief and diverting, a fun chiller if that’s your thing. It gives the impression of being smarter than most movies like it, and perhaps it is. Perhaps not. But it fooled me, and that’s what it was aiming for.