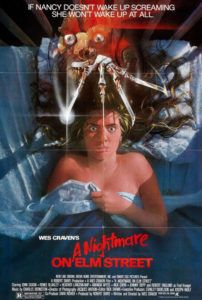 The success of Wes Craven’s original A Nightmare on Elm Street remains somewhat baffling. It came about in a decade where Hollywood horror was obsessed with Boogey Men. Until its release, such slasher movie killers were the silent types, often hiding behind a mask of some kind. By the debut of Craven’s movie in 1984, the Halloween series had run aground with its Michael Myers-less Season of the Witch spinoff, and the Friday the 13th franchise had its fourth sequel in the works. Writer-director Craven opted for something more than just teens being slain by a masked creep in the night. His innovations would create the most successful horror franchise of all time, until the release of Saw twenty years later—and all because of a Christmas-colored sweater, some long fingernails, and a charred complexion.

Craven had already established himself as a low-budget schlock and exploitation horror director, cranking out titles like  The Last House on the Left (1972), The Hills Have Eyes (1977), and Swamp Thing (1982). His latest scenario involved an undead child murderer terrorizing teenagers’ dreams, seemingly to get revenge on their vigilante parents for burning him alive. Filled with dream imagery and mind-bending twists, the script was shopped around Hollywood and virtually every studio passed. But the then-independent New Line Cinema green-lit the project, and Craven shot the picture in some thirty days with a cast of virtual unknowns, among them superstar Johnny Depp in his first onscreen performance.

The story follows four suburban teens—the good girl Nancy (Heather Langenkamp), the sexually adventurous Tina (Amanda Wyss), the jock Glen (Depp), and the bad boy Rod (Nick Corri)—who all have the same nightmare. They’re chased through their dreams by a figure with burned skin and a glove with razor fingers. Their Boogey Man dons a green and red sweater, and he wears a brown fedora. The teens learn that his name is Fred Krueger, that he was a child murderer, and that he was torched by the town’s parents when a legal technicality kept him out of jail. By some incredible means (it’s not explained how), Freddy comes back from the dead, enters the dreams of the children whose parents killed him, and proves himself capable of harming them in reality by slaying them in their dreams.

Unlike your typical slasher film, Craven places the power in the teens’ hands, making the conflict about control over one’s unconscious mind. In the end, after Nancy’s friends have all been torn to shreds by the sharp-fingered Freddy, she simply turns her back to him and says, “This is just a dream. You’re not alive. This whole thing is just a dream.” Freddy disappears into nothingness, and the 90-minute experience proves a figment of the collective imagination. Craven intended the story to be one big dream, with Nancy waking in the finale to realize she’d been dreaming all along. But executives at New Line Cinema demanded a more macabre twist that left room for sequels—which is where the money is. The ending in the final cut shows Nancy reunited with her friends in a car that becomes a Freddy-mobile and drives off; meanwhile, Nancy’s boozehound mother Marge (Ronee Blakley) waves goodbye from the front door, until Freddy pulls a mannequin (doubling as Nancy’s mother) through their small door window. It’s a finale that, to this day, after seeing the movie upwards of ten times, leaves this critic scratching his head in confusion. 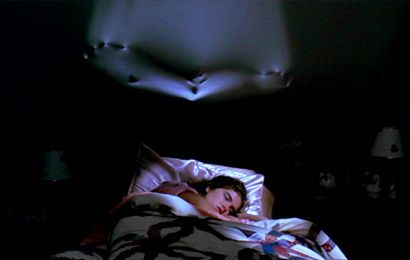 Where the film gets you are those moments when the audience is unsure if they’re watching a dream or reality. Craven convinces us that the nightmare is over until something pops out at us, the music shrieks, and we jump in our seats. Corny as it may be, these “It was all a dream—oh wait, no it wasn’t!” moments produce a few genuine jolts in Craven’s hands, whereas another filmmaker might not have known which angle would best make his audience feel as vulnerable as they should. Then there are those moments where the teens try desperately to stay awake; we watch in anticipation as their eyes close. Has the movie gone into a dream sequence? We know for sure when Freddy shows up as a hall pass monitor. Add to that some creepy children singing a twisted nursery rhyme about a child murderer, a reported 500 gallons of fake blood, and Freddy’s obscure-but-sinister character, and there’s plenty for audiences to cling to…

…At least in this first movie. In all truth, the original has not aged well, in part because it feels distant from the sequels, specifically in its depiction of Freddy Krueger. So it’s best to forget the sequels altogether and bask in the obscurity of the original. Masked by shadows due to cheap makeup effects, this isn’t the cheeky Freddy that audiences would grow to love as a macabre comic figure. Craven intended to scare us with his Boogey Man and then leave audiences with the sense that dreams could hurt us only if we let them. He never intended to make a franchise and even refused involvement on the majority of the sequels. So viewers more familiar with Freddy’s comical side in later entries may not recognize the darker, less personality-driven movie monster here.

Craven’s inspiration for A Nightmare on Elm Street came from an article about Cambodian refugees suffering from “Asian Death Syndrome,” otherwise known as Brugada Syndrome or Sudden Unexpected Death Syndrome, a malady where unexpected and unexplainable death occurs during sleep. Several Hmong men reportedly died during nightmares, and after reading about them in the LA Times, Craven came up with the concept of dreams affecting reality. As for the charred child murderer, he named Fred Krueger after a bully from his youth; Krueger’s hatted appearance was taken from a hobo that startled him as a child and since lingered in his memory; he chose the signature Christmas colors of Krueger’s sweater after reading a study in Scientific American that said the combination of red and green clashed most with the human eye. And resulting from the budgetary necessity to keep his movie monster’s weapon of choice small and mobile, Craven gave Krueger a homemade glove with finger-knives—perfect for screeching against the metal pipes in Krueger’s boiler room hideout.

But the result of Freddy’s appearance is rather odd, isn’t it? Goofy even. As though Freddy raided a garage sale in the afterlife to assemble his outfit. It’s curious that audiences in 1984 didn’t simply shrug him off, especially in this first movie, before the character was established as an iconic teen-killer-with-a-sense-of-humor in the sequels. He’s an absurdist, if not surrealist, interpretation of the Boogey Man to counter the mysterious version from John Carpenter’s landmark Halloween. Of course, there are several moments where Freddy’s sadistic humor comes through in the first movie. For example, take the scene where he chases Tina inside and then stops, for seemingly no reason but to taunt her, to chop his own fingers off. Or the scene where Nancy’s phone receiver changes into Freddy’s mouth, which sticks out a tongue and says, “I’m your boyfriend now!” It’s that humor that would make Freddy the anti-hero of his own horrific continuation of stories, with disposable teen victims supplied movie after movie to keep the nightmarish antics coming. 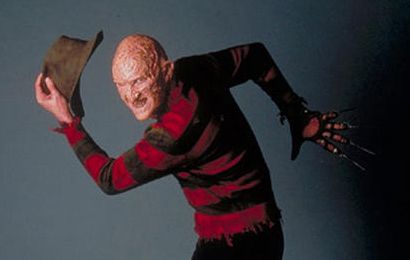 A Nightmare on Elm Street has become more like slapstick than a viable source of fright since its transformation from a low-budget slasher flick to a monumental horror franchise. Produced for a little under $2 million and earning back more than $25 million, the film spawned seven increasingly lazy sequels, with only one or two watchable entries among them—and at least one of them, Freddy’s Dead: The Final Nightmare, was a bonafide comedy. But the success of this first movie gave New Line Cinema a brief but profitable run (which ended in 2008), transforming it from a company based solely in distribution to a full-fledged studio responsible for entire productions. Indeed, the success of Craven’s movie and its sequels earned the studio the moniker “The House That Freddy Built,” even if Craven never intended his story to carry on beyond the initial film.

The franchise and subsequent legacy created by A Nightmare on Elm Street—which includes a TV show, action figures, etc.—proves greater than the sum of its parts, and this first movie is no exception. Later, sometimes better sequels such as Part 3: The Dream Warriors and New Nightmare play more with the line between dreams and reality while employing superior dream imagery to boot. And only with the first movie and these two sequels do the victims take precedence over Krueger’s sharp-tongued, kill-crazy behavior. Craven employs some startling horror setups and knows how to make his audience jump, yet his product now, separated from the post-release phenomenon, has dated badly like most ‘80s schlock. One can’t help but think that today’s notoriety for this first film, at least in part, comes from the silly obligation to acknowledge the longevity of a financially successful series by placing The First One on a pedestal.