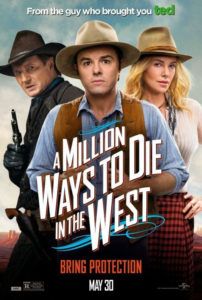 Westerns have a hard enough time making it to the screen without Seth MacFarlane souring their taste among moviegoers. Hollywood rarely offers traditional Westerns anymore; instead, it’s always a Western plus some other element. There are revisionist histories (Django Unchained), outrageous spectacles (The Lone Ranger), animated Westerns (Rango), and genre mash-ups (Cowboys & Aliens). But with A Million Ways to Die in the West, MacFarlane’s Western-comedy may have single-handedly set the troubled Western genre back a decade or more. The Family Guy creator’s directorial follow-up to Ted is set in the rugged Wild West and clearly modeled to be MacFarlane’s very own Blazing Saddles. Except, aside from one or two audible chuckles, his film’s gross-out agenda is a laughless waste of talent and, most offensively, a self-indulgent production given its painfully long two-hour runtime.

MacFarlane casts himself as the leading man in the 1882 Arizona set film, where his character Albert Stark has a sheep farm. MacFarlane is devoid of charisma as Stark, a period-aware protagonist who makes wry observations about his place in time, its social peculiarities and medical disadvantages, as if he had been transported back from the twentieth century. “We live in a terrible place and time,” he remarks to friends, pointing out the various gunfights, wild animals, diseases, and everyday threats that exist for someone in this period—all depicted in the film’s over-reliance on shock-humor. But then all of the characters seem out of place, saying things like “Oh snap!” and calling each other “douche”. In fact, had MacFarlane, who wrote the screenplay along with Alec Sulkin and Wellesley Wild, resolved to make Albert a time-traveler as he so often does with his characters on Family Guy, this may have been a more positive review for a much more ingestible film.

At any rate, MacFarlane uses his Western setting for a clichéd romantic comedy scenario: Girl #1 dumps Boy, but Boy wants Girl #1 back. Girl #2 helps Boy make Girl #1 realize that Boy is a great catch, and in the process Girl #2 falls for Boy. Boy remains none the wiser to Girl #2’s affections until the end, when Boy finally realizes that Girl #1 is a snob and that he’s in love with Girl #2. The End. To achieve this familiar plot, MacFarlane assembled a staggeringly good cast, all no doubt hoping for a repeat of Ted‘s huge success. When Albert’s cowardice causes him to be dumped by his darling Louise (Amanda Seyfried) for a snooty moustachier Foy (Neil Patrick Harris), new-in-town belle Anna (Charlize Theron) helps him get Louise back by training Albert to gunfight. Of course, Albert and Anna fall in love. But Anna’s past puts a kink in their romance; she happens to be the wife of notorious bandit Clinch Leatherwood (Liam Neeson), who wants Albert dead for cuckolding him.

Along the way, MacFarlane injects as much potty, race, and meta-based humor he can muster, most of it designed for mass absurdity, offensiveness, and shock value. There’s a consistent preoccupation with farting in the film that knows no end. An extended scene involving Foy expelling diarrhea into a series of hats is gag-inducing, as was a shot of a sheep penis urinating into Albert’s face. At one point, Albert questions why a shooting gallery game involves gunning down escaped African slaves, but later, he makes a shameful remark about Arabs. Every joke has been tailored in typical MacFarlane fashion, where he exaggerates the punchline and repeats it over and over again until it’s unfunny. Sometimes this approach works and the repetition itself is hilarious. In this case, the overly familiar narrative, inconsistent historical setting, and lowbrow humor never congeal.

A Million Ways to Die in the West isn’t completely unfunny. A situation involving Albert’s virginal friend Edward (Giovanni Ribisi) unsuccessfully trying to convince his fiancée, the town whore Ruth (Sarah Silverman), to have sex is amusing. There’s also a comical running joke about people in the West not smiling in photographs. And it wouldn’t be a Seth MacFarlane product without a nod to a 1980s franchise; look for Christopher Lloyd’s Doc Brown from Back to the Future, a nice cameo spoiled by the film’s trailers. Despite these momentary lapses in its otherwise laughless runtime, the film is a prime example of what happens to filmmakers who have a rousing success, and for their next project, demonstrate their own lacking self-restraint. A Million Ways to Die in the West is a disaster in nearly every sense, from its bland production values and visuals to the historical setting and the uninvolved plotting. Almost nothing about the film works, and it leaves us wondering why anyone involved thought this was going to be funny.