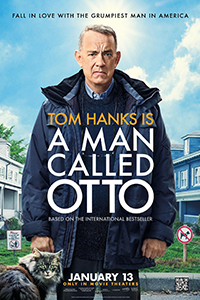 For the most part, A Man Called Otto works despite itself. A Hollywood remake of Sweden’s 2015 hit A Man Called Ove, which writer-director Hannes Holm based on the 2012 novel by Fredrik Backman, the new version appeals to audiences with an aversion to subtitles and a penchant for uncovering a grumpy old bastard’s heart of gold. There’s no risk of pushing anyone’s boundaries here, especially not with Tom Hanks in the titular role. After all, most moviegoers are predisposed to love America’s Dad, and even a mediocre effort by Hanks becomes more palatable thanks to the actor’s affable screen presence. Indeed, A Man Called Otto belongs in the camp of the Hanks-directed Larry Crowne (2011): a flavorless dud except for Hanks, who remains mostly charming throughout. Fortunately, this movie is better, but not because of its leading man, who gives a predictable performance as the embittered and anal-retentive widower at the center. Hanks fills the lead role competently enough, but it’s the supporting cast that tugs at our heartstrings the most.

Hewing closely to the original, screenwriter David Magee’s adaptation doesn’t have many surprises. Hanks stars as Otto Anderson, a recent retiree who lost his wife to cancer a few months earlier. Otto spends his days micromanaging his small community of neighboring townhomes in Pittsburgh—checking for parking permits, reorganizing the recycle bins, and crabbing when someone doesn’t follow protocol—though he has no official authority over the homeowner’s association. Orderly and inflexible as he may be, Otto plans to commit suicide with the same fastidiousness, bickering with a hardware store clerk over why they charge by the yard and not by the foot for a length of rope, with which he plans to hang himself. But in conventional Save the Cat! wisdom, we know Otto has a soft center beneath his crusty interior. When a stray cat appears near his garage stall, he doesn’t kick the scruffy-looking feline—a clear sign that his bark is bigger than his bite. Eventually, he adopts the little creature, as indicated by the badly Photoshopped Swedish and American movie posters.

The same is true when new neighbors arrive across the street. Marisol (Mariana Treviño), chatty and very pregnant, and Tommy (Manuel Garcia-Rulfo), inept but kind, along with their two energetic children, repeatedly annoy and interrupt Otto. Whether it’s Marisol’s inability to drive or Tommy’s lack of home repair skills, Otto grumbles through helping them. Though, Marisol wins him over with offerings of her authentic Mexican cuisine. And when he bickers or shouts, Marisol calls out his bad behavior, realizing there’s more to Otto than his scowl suggests. This is chiefly because his other quirky neighbors, who have lived alongside Otto for years and recognize that his cantankerousness hasn’t always been so bad, fill in some of his backstory. Sure enough, every time Otto sets out to commit suicide (via hanging, leaping before a train, shooting himself, etc.), he stops himself to indulge one of his neighbors in a begrudging act of generosity. Otto’s frequent and extended flashbacks also shed amber-hued light on how he met his late wife, Sonya (Rachel Keller), and how things weren’t always so bleak.

The production is a family affair, with Hanks co-producing alongside his wife, Rita Wilson. Their son Truman also stars as young Otto in the many flashbacks, which amounts to a considerable chunk of screen time. The scenes of young Otto and Sonya falling in love are touching, even if they’re captured with a dash of rosy idealism. The movie’s formulaic structure and presentation arrive courtesy of Swiss director Marc Forster, the flavorless journeyman responsible for Finding Neverland (2004), Quantum of Solace (2008), and Christopher Robin (2018), among other forgettable output. Aided by Thomas Newman’s overemphatic score, Forster makes no moment nuanced, no emotion understated. In a particularly cloying scene, Otto holds a gun to his chin while the soundtrack plays Kate Bush’s “This Woman’s Work” from 1988, with the pointed lyric, “I know you have a little life in you yet, I know you have a lot of strength left.” Along with the spirit of his wife talking to him, the scene turns into an almost unbearably corny moment—an odd result given its grim subject matter.

Much of A Man Called Otto alternates between utter schmaltz and genuinely moving feel-good material. That Otto was born with an oversized heart becomes an eye-rolling irony. A subplot involving a corrupt real-estate stooge (Mike Birbiglia) trying to force the homeowners out of the neighborhood feels like a manufactured conflict that overextends the runtime to 124 minutes. But the scenes with Marisol and her family have an effortless warmth, thanks to Treviño, whose contagious smile and open-hearted character cannot help but win the viewer over. The same can be said for a subplot where Otto takes a trans teen (Mack Bayda, quite good) under his wing. However, not even Treviño or Bayda can cut through the movie’s crass commercialism with its shameless Chevy product placements, explored in a sequence about Otto’s lifelong devotion to the brand, and capped by a finale that finds him upgrading to the latest model. The moral of the story—that everyone has their reasons, and we should all attempt to be more empathetic and open to our neighbors’ experiences—is a worthy one. But the movie’s routine execution cannot help but feel cheap and manipulative, regardless of how effective that manipulation proves to be.