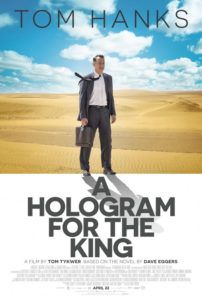 After the series of animated production company logos that preface A Hologram for the King, it takes a moment to adjust when another animation bursts onto the screen in the flm’s first scene. The camera rushes into a suburban cul-de-sac, and suddenly we’re thrust into a frenzied dream rendition of Talking Heads’ “Once in a Lifetime” as sung by Alan Clay, a middle-class businessman. “This is not my beautiful house,” he declares—and poof, the house disappears into pink smoke. “This is not my beautiful wife,” Alan sings, and she suffers the same fate. “How did I get here?” Played to perfection by Tom Hanks, who exudes no lack of charm, Alan then appears on a rollercoaster, his face expressionless, and repeats the lyric, “Same as it ever was.” This effective metaphor for Alan’s present disquieted anxiety needs no more backstory, allowing Alan’s existential journey throughout this offbeat little film to proceed pleasantly and with profound feeling.

“Offbeat” is one of those critic buzzwords and is often overused. But in the case of writer-director Tom Tykwer’s adaptation of the 2012 novel by Dave Eggers, the word can be taken quite literally. Along with editor Alexander Berner, Tykwer creates a discordant pacing that feels intentionally out of tune with the world. If this is the case, it’s because the protagonist, too, feels disengaged from his own life. Alan has found himself in the midst of various personal and professional disasters. During his recent divorce, his impatient ex-wife (Jane Perry) demanded Alan sell his home to pay for the college education he promised his daughter (Tracey Fairaway), who’s nonetheless kind and understanding. Saddled with providing for his daughter’s future, he’s also under pressure to deliver a crucial contract at work. Elsewhere, his disapproving father (Tom Skerritt) scorns him for his “un-American” approach to business.

Before the title sequence is finished, Alan has landed in the surreal world of Jeddah, Saudi Arabia, where he and his colleagues must pitch their elaborate hologram technology to the King. Jet-lagged to such a degree that he oversleeps several days in a row, Alan keeps missing business meetings that never end up happening anyway. His staff has been consigned to a large tent in the King’s Metropolis of Economy and Trade, a vast part of the desert that will someday become a mecca of modern Saudi Arabia. But for now, it’s comprised of half-finished construction projects, shimmering glass, and the false promise of fast food vendors. Without basic services such as air conditioning, food, or the WiFi necessary to do their jobs, Alan’s team is forced to wait. If the pitch goes through, he can pay for his daughter’s tuition, but he can also professionally recover from mistakes he made at his previous corporate job at Schwinn Bicycles, a company he may have single-handedly ruined in a deal with China.

Tykwer echoes Alan’s inability to find his rhythm in the film’s strange pace. Discovering just how Alan’s off-tempo position in the world connects to Tykwer’s formal presentation takes time; the viewer might require nearly a third of the runtime to fall under its spell. After all, Alan is lost in horrifying, symbolic dreams that press his guilt and shame. The jolted cutting shows us his morning bathroom routine and late-night angry emailing. And then there’s the large, concerning lump on Alan’s back—in no small way a literal and figurative cancer. Each time Alan wakes up late again, he requires the services of an independent driver, Yousef (Alexander Black, excellent), a good-humored man who worries a husband he’s cuckolded will rig his car to explode. Yousef could be a throwaway character present for mere comic relief, but he represents a crucial step in Alan’s understanding and appreciation of Saudi Arabia. The same goes for Zahra (Sarita Choudhury, also excellent), the Muslin doctor who removes the deeply emblematic lump.

Hanks’ indelible everyman quality fits perfectly into the proceedings, which find Alan rediscovering himself and his purpose in life. He’s initially unable to “make things happen”, represented when he feels so disjointed that he cannot bring himself to bed Hanne (Sidse Babett Knudsen), a Dane businesswoman who all but throws herself at Alan during an uncharacteristically wild party. Although some viewers may be underwhelmed by the film’s modest journey of Alan finding his center, A Hologram for the King remains pleasant in its apparent simplicity, yet also deceptively simple. To be sure, this isn’t the kind of Tom Hanks pleasantness found in his unassuming, seriocomic, and thematically similar directorial effort, Larry Crowne (2011). Rather, the story considers pleasures such as the splendor of the desert or an enchanting underwater sequence, and asks that its audience see them as Alan sees them—which is to say, with a sense of wonder and appreciation.

Tykwer—who helmed two criminally underrated films: Perfume: The Story of a Murderer (2006) and Hanks in some segments of Cloud Atlas (2012)—places the actor in scene after scene, each a new vignette that advances the drama. From the swinging Dane party to the quiet moments in the desert with camels, from wolf hunting to the serene conversations between Alan and Zahra, Tykwer makes the most of his actor and the film’s setting. Production designer Uli Hanisch and cinematographer Frank Griebe capture the rarely appreciated exquisiteness of their locations in Saudi Arabia, Egypt, and Morocco, rendering locations like the unfinished metropolis saturated in meaning as it reflects Alan’s still-under-construction life. And while one could argue that Hanks makes A Hologram for the King better than it might be otherwise, that’s true of every film in which he appears. Tykwer and Hanks have made a film with familiar ideas and sentimentalities, all presented in a comical, romantic, and always enjoyable package that never overreaches to achieve its significance, even amid its many metaphors.