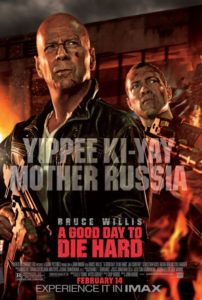 To make A Good Day to Die Hard, Twentieth Century Fox seems to have appointed talent completely unfamiliar with the franchise. This fifth entry in the Die Hard series comes 25 years after the original, and time has dulled the memories of those involved. That, or they’ve just never seen the first four movies. What other explanation is there for the result, a filmic mess containing all the standard downfalls of a bad action movie? Nothing about the film looks or feels like the Die Hard experience; that includes tired-looking star, Bruce Willis. And though that film’s astounding action sequences offset the lack of Die Hard-isms in 2007’s Live Free or Die Hard, the same cannot be said here. The entire production feels like a Hollywood exercise in check-cashing. Indeed, with name-brand recognition and enough advertising to boost ticket sales on a holiday weekend, it doesn’t matter how lame the final product ends up being, because Fox will make back their budget on theatrical and home video sales, thus justifying half-hearted projects like this one in the future.

The best Die Hard films have been made by proven action directors. Before making the original and With a Vengeance, John McTiernan directed Arnold Schwarzenegger in Predator; later, he made The Hunt for Red October and the remake of The Thomas Crown Affair. Len Wiseman launched the successful Underworld franchise before taking on Live Free or Die Hard. For this sequel, the studio turned to John Moore, whose banal past projects suggest his status as Fox’s director-for-hire on whatever the studio gives him to shoot. Examples: Behind Enemy Lines, the Flight of the Phoenix remake, The Omen remake, and Max Payne—all released by Fox. He carries out each assignment with no personal style, using techniques made popular by Michael Bay, except with less skill, if you can believe it. His cameras shake, his editor Dan Zimmerman chops indiscriminately, and his capacity for coherent storytelling is virtually nonexistent.

Another employee on Fox’s punch-clock is Skip Woods, screenwriter of astoundingly dull studio projects like Hitman and X-Men Origins: Wolverine. Woods’ scenario proves so vapid and devoid of interesting developments that one yearns for the days when Die Hard movies were based on unrelated books (or at least existing action screenplays not originally conceived for this franchise). Instead, Woods’ writing constructs a plot that finds Willis’ signature New Yorker Det. John McClane hopping a plane to Russia to find his son, Jack (Jai Courtney), who has been rotting in a Russian jail. Unbeknownst to McClane, Jack is actually a CIA agent in the middle of a 3-year operation to secure a hidden file from the imprisoned whistleblower Komarov (Sebastian Koch). The file contains incriminating evidence about a government official, Chagarin (Sergei Kolesnikov). McClane, hapless in the eyes of his son, summarily botches the operation by showing up and blowing Jack’s cover. Meanwhile, a band of Chagarin’s goons, led by absurd Euro-trash villain type Alik (Rasha Bukvic), shows up around the same time as McClane. Once they have Komarov, the bad guys cart him off to recover his file from its hiding spot at the abandoned Chernobyl disaster site. McClane and son follow. Gunfire, explosions, and deaths ensue.

As the plot unfolds, Willis and Courtney move from one action sequence to the next, their flat going-through-the-motions expressions setting the film’s tone and our mood. They’re tasked with predictable dialogue alluding to a history of conflict in their father-son relationship, mirroring McClane’s rocky relationship with his daughter Lucy (Mary Elizabeth Winstead, who appears in bookend cameos) from Live Free or Die Hard. Encouraging “Thatta boy!” remarks and stern “You should respect your father!” banter interrupts the steady flow of gunplay and car chases, but the conflict is never really fleshed-out. Therefore, it’s uninvolving when inevitably resolved. All the while, McClane takes a back seat to Jack, an uninteresting and one-note character unable to command the screen. At the same time, McClane complains that he’s “supposed to be on vacation!” except he’s not; he traveled to Russia to rescue his son from prison, not for a holiday. Some of these intermittent lines were clearly dubbed in during post-production for comic effect.

The villains are equally underdeveloped, and a juicy villain is crucial to a great Die Hard film. Alik, an uninteresting lackey, dances about in an eccentric movie villain way and notes, “You know what I hate about Americans? …Everything. Especially cowboys.” This at least justifies McClane’s signature “Yippee-ki-yay, motherfucker” one-liner, but it doesn’t help us understand the villain’s motivations. Komarov’s double-crossing daughter Irina (Yuliya Snigir) has a borderline incestuous affection for her father, but such hints are never explored. Chagarin would seem to be the scheme’s mastermind, but then a few twists correct that assumption. Not that the “big reveal” is any surprise. One of the resounding problems with A Good Day to Die Hard is its lack of a central villain from start to finish. There’s no equivalent to Hans or Simon Gruber, no Thomas Gabriel, not even a Col. Stuart. The film’s many side-villains are a confusion of baddies with an unclear purpose. And though Die Hard films have a history of master-criminals with ulterior motives, the filmmakers don’t establish the stakes well enough to make us care when we’re finally told what’s going on.

Clocking-in at 97 minutes, this marks the shortest Die Hard film by about twenty minutes, a choice made no doubt to allow maximum screenings-per-day in cineplexes. Throughout, we sense there was much more material before Moore and Zimmerman started cutting. Hell, that’s evident by watching the trailer, which shows many shots not present in the final cut. The filmmakers have whittled their footage down to the degree that action sequences and plotting no longer connect or make sense in a logical way. Even if bad word-of-mouth spreads, Fox will probably make a profit on A Good Day to Die Hard, but it would be a fine lesson to the studio if they didn’t. If this one bombed, it’s failure would force the franchise’s future talent to rethink their strategy and develop something new, which is what McClane needs. To make Die Hard relevant again, Fox needs a skilled writer and director to broaden Willis’ character with a challenge that reminds us what once made him such an original hero in the first superb film and what made the character relevant through Die Hard’s many subtexts. Some smart, edgy dialogue couldn’t hurt either. As is, A Good Day to Die Hard fails not only in meeting the requirements of an ample Die Hard sequel, but it also fails to be a watchable piece of mindless action.