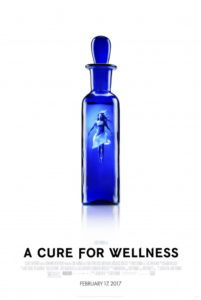 Gore Verbinski directs a Gothic horror throwback in A Cure for Wellness, a beautiful-looking attempt to imbue an old-fashioned B-movie with the rich production value and aesthetics of a prestige picture. Unfortunately, it also comes with a prestige picture’s elongated runtime. In typical Verbinski fashion, the overlong result runs just under two-and-a-half-hours, stretching the usual trappings of horror film beyond their welcome. Then again, perhaps the length would not matter if the story had not devolved into indecipherable nonsense during the last half-hour. In hopes of a worthwhile payoff, the viewer goes along with many of the film’s wilder ideas and accepts several unintelligible curiosities throughout A Cure for Wellness. But the outcome leaves a frustrating number of unanswered questions and, ultimately, disappointment.

Sent to retrieve a missing CEO before a crucial merger, an unprincipled young businessman named Lockhart (Dane DeHaan) arrives at a spa in Switzerland, greeted with sordid local legends about the former owners of the sanitarium. Now run by the sinister Dr. Volmer (Jason Isaacs), the hydrotherapy center boasts a clientele of super-rich, overworked executives who cleanse themselves with the reviving properties of local spring waters. Of course, there’s something ominous going on beneath the idyllic surface. Pembroke (Harry Groener), the missing executive, refuses to leave with Lockhart, who, after an inconvenient car accident, finds himself with a broken leg and a (supposedly) brief stay in Volmer’s care. Lockhart and the viewer settle into a routine in which he hobbles on his crutches and investigates strange sounds throughout the sanitarium, exploring hidden passageways, and talking to shifty attendants. The other patients aren’t much better: they either disappear, their teeth are falling out, or they’re just-plain-strange, like Volmer’s “special case” Hanna (Mia Goth).

Trailing the commercial failure of Guillermo Del Toro’s similarly themed spookhouse tale Crimson Peak, Verbinski conceived the story with screenwriter Justin Haythe. Their influences are palpable from the opening credits, when a female voice purrs an eerie lullaby as the camera pans across the cold exterior of several financial service skyscrapers, comparable to the opening of Rosemary’s Baby. When the action shifts to Volmer’s isolated castle on a hill, whose creepy backstory involves a doctor obsessed with his lost love, The Abominable Dr. Phibes comes to mind. Later, when the proceedings force the audience to question whether the sanitarium’s staff has conspired to keep Lockhart there, or if Lockhart suffers from paranoid delusions, Martin Scorsese’s Shutter Island seems like an obvious source for Verbinski and Haythe.

Similar to Leonardo DiCaprio’s character in that Scorsese’s film, Lockhart witnesses bizarre behavior from patients and personnel alike, while he also sees horrific, occasionally random things that seem to build toward a greater overall mystery. Whereas every insignificant occurrence or horrific sight in Shutter Island has a justified correlation to a larger purpose (and a decided emotional significance for DiCaprio’s protagonist), A Cure for Wellness employs a lot of weird-for-weird’s-sake moments, and Lockhart remains uncompelling. Though the audience might not realize it until the conclusion—largely because we expect everything will make sense in the end—the film is filled with plot holes and unexplained scenes present merely to evoke a fleeting reaction. Consider the sequence in which a nurse unbuttons her uniform to show her breasts to a duty guard, who proceeds to vigorously masturbate at the sight; meanwhile, this has nothing to with Lockhart, who’s nearly drowning in a sensory deprivation chamber filled with flesh-eating eels.

This kind of throwaway oddness occurs throughout the film. Indeed, Verbinski’s presence behind the camera means a ridiculous degree of self-indulgence and narrative ambition, both backed by his considerable formal talents. In every film since his J-horror remake The Ring, the director attempts to turn high-concept ideas into consumable Hollywood fare, and the mix can feel like the product of a filmmaker trapped in his headspace. Sometimes the outcome is brilliant or quirky, like Rango or The Weather Man; other times, the concept behind his ambition remains sound but over his audience’s head, as with The Lone Ranger. Elsewhere, he simply reaches too far, like in Pirates of the Caribbean: At World’s End (Remember the scene when Calypso grows into a five-story giant and shouts indiscernibly?). Put A Cure for Wellness in that last category of over-ambitious, if admirable failures.

Regardless of Bojan Bazelli’s luscious cinematography and the gorgeous locations shot around Castle Hohenzollern in Germany, the convoluted story quite simply makes little sense. By the end, there are too many unanswered questions, confused reversals, and insufficient explanations for what has happened. For instance, Lockhart loses one tooth and suffers a dentist’s drill through another, but in a later scene, his teeth have been miraculously restored. How did that happen? Near the end, the story suggests Lockhart has been brainwashed to join the sanitarium’s cause, but in the next scene, he inexplicably rebels against it. All of this might be easier to accept if Lockhart’s sanity had been questioned throughout the film, leaving the viewer with an inkling that the whole film was a hallucination, but aside from some daddy issues, our hero seems to be sane enough. Along with a fiery climax and a cryptic smile in the final scene that, undoubtedly, even the filmmakers couldn’t explain, the last section of this film proves disastrous and undermines any goodwill built up in the preceding two hours. Sheer peculiarity may earn A Cure for Wellness devoted enthusiasts, but those hoping for story logic or emotional involvement will feel unfulfilled.