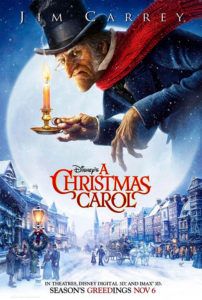 Everything poignant and evocative about Charles Dickens’ A Christmas Carol has been rendered flat by Disney’s latest adaptation. Through a dumbing rollercoaster ride experience, director Robert Zemeckis keeps the basic plot of the immortal classic intact, but he incorporates gratuitous amounts of slapstick and high-flying gags for no other reason except to experiment with the limits his medium. Shot using motion capture CGI, the same method he used on The Polar Express and Beowulf, all of the story’s spirit has been removed. The experience boils down to an appreciation of the film’s technical prowess, which is immense, but there’s no magic involved in the exposition.

There’s no point in going over the plot, since Dickens’ beloved tale has been ingrained into our very being. Everyone knows about the story’s crotchety old moneygrubber Ebenezer Scrooge, the various Christmas ghosts, the underpaid Bob Cratchit and his ill son Tiny Tim, and Scrooge’s last-minute redemption. And Zemeckis doesn’t reinvent that story, besides turning it into an amusement park exhibition. Victorian London becomes a funhouse in the director’s hands, as the frame moves wildly about the film’s world like some Disneyland ride. As Scrooge zips through the sky or shrinks down to the size of a mouse to ride an ice slide, the entire show becomes a physical exercise versus a trial of the character learning to love Christmas again. The computer-generated animation makes it all look very real, and the 3-D presentation, should you choose to endure it, makes the environment pop with faux corporeality.

Motion-capture animation, or mocap, involves placing receptor nodes all over an actor’s body, and as they act out a scene a computer translates their movements into a digital format. So every celebrity acting in the film does more than just provide their voice. Still, the majority do not feel like full performances, despite name actors like Gary Oldman, Colin Firth, Bob Hoskins, and Robin Wright Penn in the cast. Actions and surfaces appear very realistic, whereas the characters’ eyes look dead inside. Their faces and movements approach the photo-real, but something essential is lacking in the way Zemeckis’ animators depict the windows into the soul. They look like wax sculptures come to life. It’s creepy, and it will probably scare small children.

Jim Carrey plays Scrooge, as well as the first two Scottish-accented Christmas ghosts, all of which resemble Carrey in a peculiar way. He never quite disappears into any of the roles, so there’s always an inkling of the actor underneath. It’s a distracting effect, akin to Tom Hanks’ multiple roles in The Polar Express. Carrey’s usual over-the-top persona exaggerates every aspect of his characters, particularly his Scrooge, the zaniest Scrooge in all of cinema. The filmmakers have made the character into a compendium of physical humor—Scrooge falls down stairs, outruns a ghostly stagecoach, and soars high above London, all to the delight of small children, who might otherwise be frightened by the dark tone of the film. No matter how expensive and visually impressive the film’s technical gimmicks may be, they aren’t enough to propel Carrey’s performance above the great Scrooges of the past: Alastair Sim, George C. Scott, Patrick Stewart, Michael Caine, Scrooge McDuck, and so on.

Zemeckis is clearly more interested in testing the darker possibilities of mocap animation within the story, particularly the ghost elements, suggesting Zemeckis would rather be making a full-fledged ghost story than another rehash of Dickens’ overexposed tale. Scenes with Marley in chains and The Ghost of Christmas Yet to Come are genuinely frightening and come alive like no other in the film, much in the way scenes with Grendel stand out in Beowulf. Zemeckis has been fascinated with bringing an adult edge to his animated films ever since Who Framed Roger Rabbit? Perhaps it’s time for him to stop animating well-known literary works and test his mocap technology with a story that will better compliment the animation style.

The best comparison to A Christmas Carol is Ron Howard’s abysmal How the Grinch Stole Christmas, another Christmas blockbuster where Jim Carrey plays Jim Carrey in disguise. Both films completely abandon the heart of their respective sources by resolving to exploit their star’s wackiness through madcap antics. Some audiences gobbled up Howard’s film, and they’ll probably eat this one up too. Zemeckis does his best to make the story his own with some admittedly unsettling ghost imagery, but the experience lacks soul, which is exactly what Dickens hoped to communicate. Those of us looking for holiday entertainment more engaging than the visual superfluousness this film amounts to will have to search outside the mocap realm.