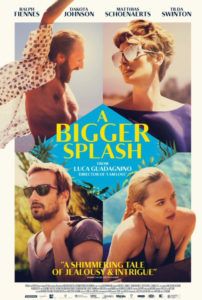 Replace the gangsters with music industry types, and the setting from Spain to Italy, and Luca Guadagnino’s A Bigger Splash resembles something not unlike Jonathan Glazer’s Sexy Beast. In that wonderful film from 2000, Ben Kingsley arrives at the villa getaway of a retired thief, played by Ray Winstone, to pester him into performing one last job. Kingsley’s Oscar-nominated performance is full of acerbic energy and fast-talking insults delivered under the skin to Glazer’s complicated group of characters. Ralph Fiennes plays a similar kind of role in Guadagnino’s film, entering an otherwise quiet and secluded home of old friends to reopen forgotten wounds and generally shake things up. Like Kingsley, Fiennes deserves awards consideration for his uninhibited, lively, and unforgettable performance.

More significant than its similarities to Glazer’s post-modern debut, A Bigger Splash contains a lushness rarely seen in U.S. cinema. On display here is a sensuousness in the filmmaking, in that Guadagnino wants to alert each of the five senses through his direction—much as he did in his previous film, I Am Love (2010): Visually, his sun-drenched setting on the Sicilian island of Pantelleria transports us to a more European, and distinctly pagan mindset. Aurally, the story’s connection to rock ‘n’ roll affords an excellent soundtrack featuring The Rolling Stones, Harry Nilsson, and St. Vincent. Guadagnino engages our senses of taste and smell by shooting meals and their ingredients with a fetishist eye. And for touch, there’s enough flesh onscreen to imagine we could reach out and touch the actors. Walter Fasano’s breathless editing of Yorick Le Saux’s sumptuous cinematography connect these senses together in a way rarely seen in cinema, yet familiar to Guadagnino.

Once again, Guadagnino has made superior use of Tilda Swinton, here playing Marianne Lane, a David Bowie-esque rocker in her fifties, now voiceless and recovering from a vocal cord surgery, but still oddly sexy in her way. She and her lover Paul (Matthias Schoenaerts) have escaped to a discreet home on the Sicilian countryside. Rendering Swinton’s character unable to speak is a fascinating touch on Guadagnino’s part, as it forces us to appreciate how much Swinton communicates without words, seldom whispered to Paul. But their serene retreat is soon interrupted by the arrival of Marianne’s former producer and lover, Harry (Fiennes), brash and boisterous and without social limitations or filters. He bursts onto the scene, laughing and hugging, making crude yet insightful observations, annoying Marianne and Paul with his presumptions. Also, Harry has brought along his daughter, Penelope (Dakota Johnson), whom he just learned existed. 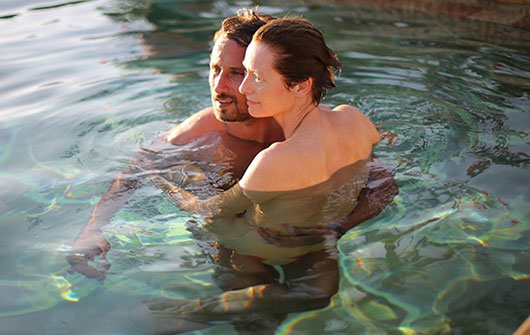 Writer David Kajganich based his screenplay on the book La Picine by Jean-Emmanuel Conil, who wrote under the pseudonym Alain Page. Conil’s book was adapted into a film of the same name (translated from French, “Swimming Pool”) in 1969, by French director Jacques Deray, who cast Alain Delon in the more centralized role of Paul. A Bigger Splash was appropriately renamed, perhaps because Guadagnino’s treatment radiates with more psychological unpredictability, sexual tension, and wild joie de vivre that impels nearly every scene. Certainly the film’s onscreen (equal opportunity) nudity, vastly more uninhibited and boorish version of Harry, and willingness to explore the previously unspoken insinuations between these characters strikes the viewer more than Deray’s adaptation.

With intermittent flashbacks, we learn the details of Marianne and Harry’s past, while Paul’s year-ago suicide attempt becomes the subject no one wants to speak about in the open. Of course, Harry will talk about pretty much anything in the open, including his unsubtle intention to reclaim Marianne for his own. Meanwhile, there’s a hinted sexual chemistry between Harry and his daughter that does not go unspoken. Harry is a sexual being through and through, and having just met his daughter and not having watched her grow up, he cannot help but find her attractive. Paul, too, seems bothered by Penelope’s very presence. And while she may seem like a character merely present to unhinge the other three, Penelope becomes a fascinating, mysterious figure by the last scenes. Even more than Penelope, Harry unhinges the others; he’s not unlike the snakes that slither onto Marianne and Paul’s property, which they feel so impelled to toss into the bushes. A Bigger Splash may lose some viewers when the narrative takes a surprising turn in the final act, but each character grows another layer as a result, retaining a place for the film in the viewer’s mind long afterward.

In I Am Love, Guadagnino used Swinton to demonstrate the joy of living life to its impassioned and sensual fullest. There’s a curious contrast to that sentiment in A Bigger Splash, suggesting an older, wiser sensibility, almost like a caveat to their previous collaboration. It’s as though Guadagnino acknowledges that the nonstop sensuousness of youth—or finally discovered sensuousness in middle age, as with Swinton’s character in I Am Love—has its limits. Harry never found those limits. He’s willing to live life to a self-destructive, turn-up-to-eleven level until it kills him. With her voice depleted and calm, reclusive lifestyle in full swing, Marianne learns some valuable lessons from her age in A Bigger Splash. To be sure, Guadagnino has arguably made a more sophisticated film than I Am Love, unless your definition of “sophistication” aligns with Sherwood Anderson.

Of course, the problems and interconnected dynamics of our four main characters are relatively self-contained in their own, rather privileged world. Guadagnino doesn’t ignore this, nor does he ignore the world at large. In the film’s backdrop, we hear news broadcasts about an influx of Tunisian immigrants in Sicily, as well as how seven of these immigrants drowned by accident. When an investigator is brought into the problems our main characters, he at last waves off their case, suggesting the interpersonal relationships of these people are significant only to the individuals themselves. It’s a thought-provoking, lingering notion in A Bigger Splash that, to some extent, contradicts the film’s earlier sensory splendor and trivializes the entire drama. And yet, in life, when the sensual pleasures are over, we’re left with their consequences. Similarly, Guadagnino leaves us with much to consider, and even more to appreciate in the artful quality of his filmmaking. And if there’s any certainty to the events in the story or Guadagnino’s styles, it’s that we won’t leave A Bigger Splash without feeling a great deal.