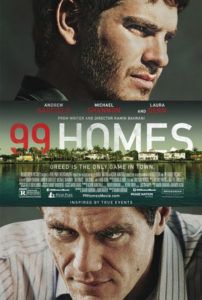 “For what shall it profit a man, if he shall gain the whole world and lose his own soul?” Though it’s not a habit of this critic to quote the Christian Bible, this passage (Mark 8:36) came to mind during 99 Homes, a potent melodrama and social commentary about the current U.S. economical divide. Centered on the business and consequences of forced evictions, the film comes from director Ramin Bahrani, scripted by Bahrani and Amir Naderi, from a story by Bahareh Azimi. Set in 2010, the film places us in the middle of the U.S. housing crisis and weighs the morality behind unannounced forced evictions that permit former homeowners a mere two minutes to remove themselves from the property, less they be moved. Bahrani handled similar material in At Any Price (2012), about a farmer forced to extreme measures to protect his farm, but the result was far less confronting.

Saddled with a melodramatic score by Anthony Partos and Matteo Zingales, the film’s otherwise unflinching subject matter forces the audience to watch as hardworking families, the elderly, and everyday people are instructed to leave homes that they’ve built, sometimes over the course of generations. Behind these evictions is Michael Shannon’s callous Rick Carver, a cold-blooded reptile-of-a-real-estate-agent who represents the bank that has foreclosed on these homeowners. The film’s opening scene features the site of an eviction-gone-bad, where a man has shot himself rather than be kicked out of his home. Carver is unscathed and walks through the house without so much as an upturned nose, issuing dehumanizing commands to the family and authorities participating in the eviction. “The law’s the law,” he says. His victims’ stories hold no interest in him. And after all, he’s got five other evictions to carry out today, and no time to dwell on dead people he didn’t know. His motto: “Don’t get emotional about real estate.”

Then we meet Dennis Nash (Andrew Garfield), a kind and experienced handyman who lives in his birth home with his mother Lynn (Laura Dern) and son Connor (Noah Lomax). After a failed foreclosure appeal in court, Dennis finds Carver at his door with the Sheriff’s Department. He and his family are told they have two minutes to vacate; their belongings will be strewn out on the sidewalk, so they better find somewhere to move, and fast. Stunned, the family checks into a dank motel filled with other evictees, while Dennis desperately tries to find a job. In a cruel irony, Carver hires him to handle a literal shit-job for some quick cash. Soon enough, however, Dennis partners with Carver, who grooms him to evict families and run various scams to exploit government loopholes for profit. Dennis isn’t as cruel about it as Carver; he apologizes his way through evictions, the process tearing him apart. But his family needs the money. One can’t help but think of It’s a Wonderful Life and consider how different it would be if George Bailey teamed up with Mr. Potter at the end.

Garfield’s emotional, often teary-eyed performance shows the heavy moral burden on Dennis’ shoulders. He is a family man, through and through, and every day at work he sells his soul—which is why he keeps the source of his newfound income a secret. He likes Carver’s money, obviously, and he doesn’t mind stealing from the government, but having to relive his own eviction from the other side, over and over, wears on him. Dern is particularly good as Garfield’s reactive mother, who refuses any indirect help from the man who evicted her. But 99 Homes really belongs to Shannon, offering a portrait of a man who has long since stopped asking about the ethical implications of his actions and, only after a few drinks, hints that he laments having to wear a concealed weapon (kept just in case someone he’s evicted lashes out). Jaded and corrupt, Carver bounces around his many huge properties, some housing his family and others his mistress, all to continue his accumulation of wealth. By contrast, Dennis’ urgent need to buy back his former (none-too-impressive) house seems almost quaint or romantic.

Although shot in a streetwise digital style by cinematographer Bobby Bukowski, 99 Homes is certainly aware of its emotional power. Nevertheless, Bahrani doesn’t trust the strength of his narrative on its own and pushes the melodrama a little too far. The aforementioned score is one example; the close-ups of Garfield and Dern’s wet faces is another. The narrative structure, too, seems conveniently full-circle for a film about the reality of the housing crisis, opening and closing with an evicted man resolving his issues with a gun. Even the title hints at the underlying theme of the low- and middle-class 99 percentile in opposition of the country’s single percentage wealthy elite. Despite these moments of obviousness, the actors give excellent performances in a story that maintains our alert attention throughout. Bahrani won’t be accused of being subtle, but his film should be acknowledged as a timely look at the microcosmic world of foreclosures and their seemingly limitless potential for scams, corruption, and greed.