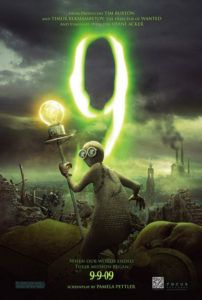 Movies like Shane Acker’s 9 make a statement by simply existing. They represent a growing movement to push animation into a realm that’s more than just “for the children.” Along with Hayao Miyazaki and Pixar, Acker’s film tests the limits of its medium. Going against the norm, it presents a computer-animated adventure rated PG-13 and intended for adult viewers. Instead of targeting the typical demographic, his film seeks to broaden the imaginations of adults, and therein demonstrate how the presentation of a motion picture should not determine its audience. By telling a story that could not be filmed in live-action, Acker makes animation the wonderfully unpredictable and visionary artform it should be.

Too bad he doesn’t back up his glorious animation with an equally interesting story. At 78-minutes, Acker’s expansion of his 11-minute Oscar-nominated short is barely a feature. His succinct little scenario from 2005 involved living sockpuppets (dubbed “stitchpunks” by the director) fighting a mechanized soul-sucking Cat-Beast in a post-apocalyptic wasteland. The plot doesn’t change much in the longer version, except that it explains how the sockpuppets live, why the human race has disappeared, and how the evil machines work for a much bigger, even more evil machine.

When 9 awakens, he finds himself unable to speak. His hands and feet are crafted from wood and copper, there’s a zipper on his chest, and his skin seems to come from a potato sack. Outside, he sees the ruinous evidence of a massive war, rubble everywhere, even the occasional dead human body. Before going out to explore, he picks up a round doohickey that interests him. More on that later. He comes upon another living sockpuppet, the friendly 5 (Martin Landau), who installs a tiny speaker so 9 can talk. He’s now voiced by Elijah Wood. All at once, 5 is snatched by the aforesaid Cat-Beast, along with that round doohickey, off to who-knows-where.

So 9 continues on his way and meets up with even more burlap people like him, all of whom have numbers written on their backs. They’re lead by an elder, the despotic 1 (voice of Christopher Plummer), who takes residence in a cathedral no less. The elder refuses to allow 9 to go after 5, but eventually, 9 goes anyway. During the rescue attempt, 9 finds that doohickey again and decides to install it into a random node that seems to fit. Bad idea. This awakens a spidery version of Hal 9000, the very same one that destroyed humanity and now wants all sockpuppets dead. After narrowly escaping, 9 wants to go back and stop the big Hal 9000, but again 1 refuses to concede.

There’s a lot of that in this movie. 9 wants to do something, but 1 says no, and then 9 goes and does it anyway. Take that formula and repeat it for about an hour, and you have the entire setup. Even with the short runtime, it will test your patience. Nothing that happens in the movie will engage audiences, as there aren’t characters so much as there are personalities. 9 seems nice enough, and that’s about all there is to him. Jennifer Connelly voices 7, a rambunctious fighter. Crispin Glover voices 6, who etches drawings of that doohickey and, predictably, is a weirdo. There’s also a brute sockpuppet, two mute librarian sockpuppets, and a one-eyed sockpuppet.

The dark landscape is contrasted by childish humor. One sockpuppet places a magnet over his head, which serves either as a drug or some masturbatory act—the film isn’t clear which. For an animated movie that chose to isolate its audience by a PG-13 rating, never do the themes feel implicitly adult; rather, only the setting contains grim material that might be too intense for younger viewers, whereas these characters and their simplistic dialogue are perfectly attuned to a child’s attention span. If it weren’t for a corpse here and there, kids would be the key demographic.

Tim Burton (Beetlejuice) and Timur Bekmambetov (Wanted) produced the film, probably adding their own dark twists to the production and inserting various superfluous action scenes here and there (there are a lot of them). Acker’s animation remains the film’s only positive note. His approach is visually stunning, both in his ability to make sockpuppets expressive despite their construction and the atmosphere he brings to his film’s tangible animated world. If only his story spent more time developing characters that were as interesting as his animation, he might’ve reached the realm of an animation master. Alas, he’ll have to go back to the drawing board, or the computer as it were.