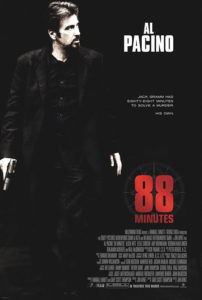 Take notice, 88 Minutes goes on far past the title’s suggested running time. That’s the first trick this would-be real-time thriller plays on its audience. The second lures us with Al Pacino, who, as the years go by, no longer assures a fine performance. Perhaps that’s the greatest mystery of this mystery: wondering why those involved didn’t toss their script in the trash upon reading.

Twenty minutes in, FBI forensic psychologist Dr. Jack Gramm (Pacino) receives a call on his cell from a disguised voice saying he has only eighty-eight minutes to live. “Tick-tock, Doc,” the voice teases. Having given expert testimony that convicted rapist and murderer Jon Forster (Neal McDonough) nine years ago, Gramm realizes that now on the eve of Forster’s execution, “the Seattle Slayer” intends to get revenge. But someone on the outside is helping Forster. Suspecting everyone from his doctoral students (none of whom seem interested in forensic psychology) to his recent one-night-stand, Gramm probes everyone in his Rolodex for clues. Meanwhile, he receives call after call reminding him the clock is ticking away.

Could the killer be Kim (Alicia Witt), his teacher’s assistant who carries a schoolgirl crush on her mentor? Or perhaps Dean Carol Johnson (Deborah Kara Unger), snooty and patronizing with her glasses barely hanging on the end of her nose? Maybe the ominous biker (Stephen Moyer) who’s always glaring at Gramm from a distance with a villainous scowl? Since his FBI buddy Special Agent Parks (William Forsythe) is busied with a copycat Seattle Slayer on the loose, Gramm has to find out for himself.

Walking about with a cell glued to his ear, we watch conversations between Gramm and his secretary Shelly (Amy Brenneman, in a wasted role). Occasional shootouts and murder scene walkthroughs can’t make up for the dull seriousness this film insists upon. Markedly humorless, the transparent setup is incapable of instilling even the slightest sense of involvement. We check our watches as every plot development unfolds, wondering how many suspects Gramm will pursue, and upon each rebut roll our eyes at how much time was wasted hunting another dead end lead.

Despite his ever-going chase, Pacino looks as though he awoke from a two-hour nap in a tanning booth, dowsed his mane in black hair dye, let it dry, and then volumized until done. The result has more poof than a bundle of cotton candy. Only during exterior shots in the Seattle rain does Pacino’s hair lose its massive waft, but without fail, his intimidating coif rises again in the next subsequent interior scene. Detaching viewers from the inane plot, Dr. Gramm’s various changes in hair height become the only reason we keep watching.

Indeed, we certainly aren’t drawn-in by Gary Scott Thompson’s cheap writing, which reaches laughably bad extremes after hearing “Tick-tock, Doc” for the twentieth time. Frequently tackling scripts for direct-to-video garbage (see K-9: P.I. and Hollow Man II), Thompson delivers the same air here, except the film’s otherwise evident awfulness is quieted by Pacino’s celebrity. (Note: Speaking of direct-to-video, consumers in countries like Brazil, Russia, Sweden, and others could pick up their copy of 88 Minutes more than a year ago on DVD, as their theatrical distributors passed on this flop. Why didn’t ours?)

Director Jon Avnet relies on builds to revelatory twists and turns, none of which creates the least amount of suspense since Gramm has already hypothesized every potential scenario in his head. Flashbacks and remembrances swoosh onscreen and repeat footage we saw minutes ago, as if we’re incapable of remembering. Avnet treats his audience like we’ve never seen a thriller before, when really we question if we’ve ever seen one this bad. The product doesn’t bode well for the upcoming Avnet-Pacino reteam entitled Righteous Kill, due fall 2008, which also stars Robert DeNiro. No doubt Pacino will receive another threatening telephone call after DeNiro screens 88 Minutes.