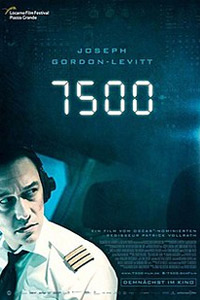 Tense and economical, 7500 seems to be engineered so critics can use phrases like “taut thriller” to describe it. German director Patrick Vollrath’s feature debut uses our post-9/11 anxiety about hijackings and flying in planes by embracing a familiar movie scenario. Ever since the attack on the World Trade Center, movies have shied away from such material or treated it with utter seriousness, especially if Paul Greengrass’ vérité-style United 93 (2006) is any indication. Still, there’s the occasional B-movie like Flightplan (2005) or Non-Stop (2014) that tries to exploit our fears in a way reminiscent of those earlier sky-bound entertainments like Airport ’77 (1977), Executive Decision (1996), or Turbulence (1997). Vollrath’s movie adopts a minimalist approach for maximum effect. It’s efficiently realized and shot in something approaching real-time, and thanks in part to the screen presence of Joseph Gordon-Levitt, it’s more engaging than the simplistic story might otherwise allow.

The script by Vollrath and Senad Halilbasic follows some very basic screenwriting precepts. It might be considered elementary if it weren’t so effective at commanding our attention. Within the first few minutes, the dialogue and camera collaborate to establish everything the audience needs to know for the remaining 90 minutes. The movie takes place almost entirely in the cockpit of a German flight from Berlin to Paris, where the Captain (Carlo Kitzlinger) and his American Co-Pilot Tobias (Gordon-Levitt) go over their pre-flight agenda. They mention how their routine flight leaves them with half-an-hour of surplus fuel, and the Captain fusses over two passengers who haven’t arrived yet. The camera stays with Tobias, who looks over his left shoulder at a black-and-white security camera that shows the view from just outside the cockpit’s security door. They’re joined by a flight attendant, Gökçe (Aylin Tezel), Tobias’ partner with whom he has a small child, and when she takes their lunch order, we see the security procedure for gaining entry to the cockpit. Each detail will be used later in the proceedings like a checklist.

Still, there’s a lingering sense of dread established early in 7500 with the first shots from the airport’s CCTV cameras—cold images of various men, later revealed to be hijackers, who move about the Berlin airport. They don’t do anything innately suspicious, per se, but the camera’s attention raises our awareness. Underneath the opening and through the takeoff sequence, there’s a familiar ambient hum on the soundtrack that exerts an aural pressure. Vollrath uses this unspoken tension to make us sit up, pay attention, and consider every detail. Inevitably, of course, extremists make a rush toward the pilots during a brief vulnerability in the plane’s security. There’s a struggle between the pilots and Kenan (Muruthan Muslu), the sole hijacker to gain entrance. Before long, an injured Tobias must redirect the plane toward Hanover. All the while, several men bang on the cockpit door and threaten him by killing passengers—which Tobias watches on the small screen over his shoulder.

What works best about 7500 is the breathless first half. Cinematographer Sebastian Thaler keeps things lean and tight, with simple images and an expert use of space. The action unfolds mostly on the star’s face, reminding me of The Guilty (2018), an entire movie about a 9-1-1 call. To that end, Gordon-Levitt’s performance is something of a stunt—just as high-concept as his turns in Premium Rush (2011) or The Walk (2015). It’s interesting to watch Tobias navigate each new wrinkle, sometimes with calm professionalism when he’s talking to air traffic control or the hijackers by phone, and sometimes with an outpouring that no one else sees. That quality is dampened in the second half when one of the hijackers, young Vedat (Omid Memar), finds his way into the cockpit. We never have a chance to get into Vedat’s head, aside from a few details about his youth and regretful choice to join a doomed mission. As Vedat’s character becomes increasingly banal, we wish Vollrath had found a way to keep Tobias alone.

Most airplane thrillers of this sort end at the logical point, when the plane lands. 7500 risks overstaying its welcome with a lengthy post-landing scene that leads to an arguable anticlimax. Then again, the movie avoids the typical approach by not making the emergency landing its highpoint, ending instead with a final flourish that considers the human toll. Moreover, the screenplay fails to say anything about these events that makes them feel relevant or vital—for some, the lack of politics may be a plus—other than opening with a quote from Gandhi (“An eye for an eye only ends up making the whole world blind”). Even though the consequence of 7500 may not last long beyond the credits rolling, it’s impossible to argue with Gordon-Levitt’s fine performance or the gripping result overall. Vollrath has crafted a confidently made, well-acted product that operates at an even-keel, without preaching to the audience or playing to the lowest common denominator.