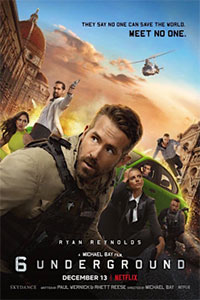 Netflix has earned a reputation for reaching into their bottomless bag of credit to give auteur filmmakers whatever budgetary dollars they need to make a dream project. Last year, they financed Alfonso Cuarón’s Roma and the Coen brothers’ sweeping Western anthology The Ballad of Buster Scruggs. This year, they gave Martin Scorsese a massive check for $150 million to make his sprawling, nuanced character piece The Irishman, but they also issued the same amount to Michael Bay for 6 Underground. Whereas the others mentioned represent a dying breed whose middle-budget productions rarely earn a profit, and therefore require the support of studios willing to gamble for the sake of their noncommercial artistry, Bay’s inclusion among them feels wrong. Bay’s megabudget movies rarely lose money; rather, they earn hundreds of millions of dollars. And so, it seems Netflix hopes to introduce his brand of spectacle to their streaming service, and therein draw viewers away from their main source of competition: the multiplexes. After all, Bay isn’t struggling to get his productions off the ground, but with Netflix, he once again taps into the mainstream pipeline.

6 Underground is Bay’s version of The A-Team or, if you prefer, The Losers. Several anonymous mercenaries, six in all, have faked their own deaths to join their billionaire-playboy leader, codenamed One (Ryan Reynolds), to fight against the forces of evil without government oversight. Each member of One’s vigilante faction goes by a number, and their characters have basic descriptors such as “The Doctor” or “The Hitman.” This group of “ghosts” plans to take down the despotic leader of a Central Asian country called Turgistan, a mission that requires no end of mayhem, explosions, and a body count that reaches dozens within the first five minutes of screentime. That’s about the extent of the plot, which bears a striking similarity to the videogame series Just Cause, also about rogue mercs who topple foreign dictatorships. There’s a hint of the Fast & Furious franchise too, as One’s team eventually tosses aside their no-names rule to become a makeshift family. To be sure, the script by Deadpool writers Paul Wernick and Rhett Reese resembles a lot of other material, but Bay remains committed to distracting from his movie’s derivativeness with enough flashy camerawork and editing to cause a seizure (Netflix issues a warning before the movie starts that it may lead to convulsions).

Dave Franco, Mélanie Laurent, Ben Hardy, Manuel Garcia-Rulfo, and Adria Arjona round out the cast in thankless roles, though Reynolds, occupying his familiar wiseacre persona, is the focal point. In another life, One was a billionaire inventor who felt he didn’t have any freedom, so he faked his own death to become truly free. (To paraphrase a line from Lost in America, “You couldn’t change your life on a billion dollars?”). Indeed, a certain inane and senseless quality drives everything that happens in 6 Underground, but One’s reason for starting a band of off-the-grid heroes proves downright aggravating. Waxing philosophical, he explains, “The world was wrapped in red tape, so we left it all behind to become no one.” The equally insipid dialogue doesn’t help matters. Besides a continuous flow of pop-culture references, there’s a desperate attempt to deliver badass lines that end up unintentionally funny: “They should make an out-of-office for dead people,” one of the group says before adding, “‘Sorry I’m not available now. I’m fuckin’ dead.’” Such witless banter punctuates every moment in the movie’s endlessly long action sequences. 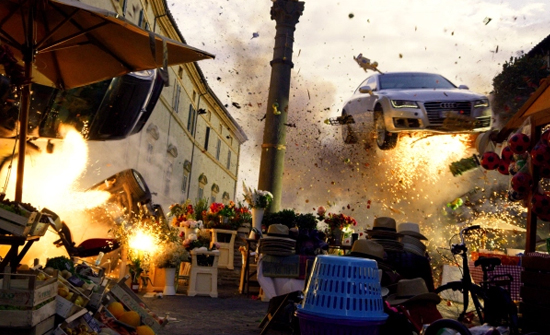 When 6 Underground isn’t flashing sponsors like Captain Morgan, Red Bull, Jeep, and Sprite in shameless close-ups, it’s leaping through time and space in a confusing mess assembled by Bay’s team of three editors. Within the first few minutes of this achingly long two-hour-and-ten-minute actioner, there are three levels of flashbacks-within-flashbacks intercut with an elaborate car chase in Florence. Throughout this opening sequence, the movie also counts down the main crew, complete with animated graphics flashing on the screen (think Suicide Squad). Later, there’s another countdown of sorts, again with garish titles, where each character’s thin backstory is revealed—in a kind of getting-the-team-together structure reminiscent of Justice League. At the same time, the movie globe-trots to Las Vegas and Hong Kong in service of a mind-numbing plot, while the climax takes place in the fictional country of Turgistan, where its blunt object approach to politics and humanitarianism become apparent. As the viewer tries (and fails) to understand the where and when of what’s happening, the characters never resonate or even seem human; they’re present only to fulfill Bay’s infantile, outmoded fantasies: every guy on the team is a badass with a six-pack, and every woman is a tough hottie who looks good in lingerie. Following this structure is less about deciphering an elaborate work of genius and more about trying to make sense of The Mentaculus.

Of course, there’s no arguing against 6 Underground to Bay’s devoted fanbase who recognize that some of his formal choices require considerable skill to accomplish. Certainly, there’s a method to Bay’s madness, and you’ll find it crammed somewhere in-between his cuts by the millisecond and swooping low-angle camera movements. However, identifying Bay’s technique and actually watching the result are two very different things. Setting aside the puerile and mean-spiritedness of Wernick and Reese’s script, most of 6 Underground has been robbed of any enjoyment by Bay’s abrasive visual schema. Bay’s idea of a visual gag comes when a goon prepares to pop a pimple in the mirror, and at that moment, a bullet passes through his head to pop it for him—a notion only a 12-year-old boy could find humorous. It’s a movie packed with vehicular destruction, silly parkour chases, and exploding heads. The camera is almost as interested in objectifying women as it is with ogling guns and the viscera they cause. And it’s all filmed like an energy drink commercial. Moreover, Bay never met a soundtrack cue he didn’t like, so not only does he pummel our eyes with relentless editing and explosions, he violates our eardrums with nonstop music that blares over the gunfire.

Watching 6 Underground at home for this review, I realized within minutes what I was in for, and it took a considerable amount of self-control not to shut it off. There’s no reason for the average viewer to do the same. Other Bay shoot-em-ups, such as Bad Boys (1995) and The Rock (1996), deliver a similar result with considerably more cohesion and humor. But the financial success of Bay’s increasingly nonsensical Transformers franchise has justified his accelerated Bayness of late, leaving his subsequent offerings even sloppier than usual. 6 Underground plays like the director hoped to blend his earlier action movies with the deliberately dumb comedy of his 2013 satire Pain & Gain (a movie so bad I couldn’t be bothered to write about it). But being intentionally stupid doesn’t necessarily make the movie smart; it’s just another kind of stupid. Bay’s ambition is to create an ongoing franchise with Netflix, evidenced in the movie’s multiple hints at a return of these characters (One has a laundry list of dictators he wants to overthrow). But if you save your time and avoid this squirm-inducing, irritating mess of a movie, then maybe we’ll all be spared from another one.