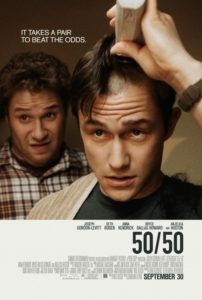 In a movie about someone living with cancer, a delicate balancing act takes place and determines if the production falls into intolerably melodramatic territory, or emerges as something that connects with audiences on a deeper level. Go too broad, and you’ll fall into a series of clichés perfected by Terms of Endearment and most Lifetime movies since, but put the material in the hands of strong characters developed by even stronger actors, and you have something like 50/50. This sweet, funny story involves a narrative you’ve seen before—a nice guy learns he has cancer, searches for answers, makes a connection with his crisis counselor, and beats the odds with the help of friends—but with a freshness embedded into the material through humor and likable people.

Joseph Gordon-Levitt stars as Adam, a Seattleite who writes for public radio, and finally sees a doctor about his persistent back pain. After many tests, a detached oncologist tells Adam he has a rare form of spinal cancer; his chances of survival are as the title suggests. Adam tells his best friend, Kyle (Seth Rogen), about his condition and he panics more than Adam does, but he also meets the challenge head-on through a supportive, positive attitude. The same cannot be said for Adam’s flaky girlfriend, Rachael (Bryce Dallas Howard, playing yet another incredible bitch after this year’s The Help), who agrees to stay and take care of her boyfriend; but she can’t handle the messy parts and won’t enter the hospital (because she doesn’t want to mix “the negative energy with the positive”) when he receives chemotherapy treatments. And then there’s Adam’s mother (Anjelica Huston), who conversely smothers Adam with her worries; since her husband is stricken with Alzheimer’s, she’s accustomed to taking care of her family like a nurse.

Screenwriter Will Reiser based the story on his own experiences with spinal cancer, and Rogen was Reiser’s actual support at the time; although the film is largely fictional (at least, I hope so, for the real-life Rachael’s sake). At any rate, what emerges from Adam’s experience is not a profound understanding of life and how it should be lived, rather an appreciation for the flawed loved ones Adam has around him. Philip Baker Hall and Matt Frewer play Adam’s fellow chemo-pals; they sit together through treatments and enjoy pot-infused macaroons. After this, there’s a hilarious sequence where, stoned, Adam makes his way through the hospital hallways, smiling and dazed, only to be confronted by the sight of a nurse pushing a corpse down the corridor—at which Adam can’t help but laugh. The tragic aspect of this moment is that Adam has not yet accepted the risk of his own condition. Director Jonathan Levine (The Wackness) offers several of these comic, bittersweet moments that don’t go too far into Adam’s misfortune but also don’t treat the disease too lightly.

In an initially low-effort performance, Gordon-Levitt shows Adam internalizing his fear and anger—all emotion, really—over the situation. His therapist-in-training, Katherine (Anna Kendrick, from Up in the Air), quotes the book and tells Adam that he’s in shock. He goes through the motions for much of the film; we see several shots of Adam, who doesn’t drive, on the bus or in bed staring off at nothing. He spends a lot of time at the bus stop, no thanks to his unreliable ride Rachael. The actor’s significant range doesn’t rupture through until Adam has a breakdown, which is when Gordon-Levitt reminds us that he’s one of the most talented young actors working today. (Don’t believe me? See The Lookout.) Meanwhile, Rogen plays himself, per usual, though this is the second time he’s played sidekick to a dying protagonist, after caring for Adam Sandler in Funny People.

Filled with Rogen-standard humor involving sex and drugs mixed with plenty of heart, the film avoids most of the ugly details of what cancer sufferers endure. To be sure, 50/50 won’t confront you with much by way of its grim reality. In fact, by the end, one feels inclined to describe what they’ve seen as a romantic comedy or even a date movie, with cancer as a device to deepen the protagonist’s path to love. Movies about cancer patients take just as many different approaches to treatments as the patients themselves. Some use New Age techniques, some fall into despair, some treat the physical pain alone, some form new bonds with loved ones, and some use humor to pull themselves through. With an optimism that isn’t shrouded by a layer of saccharine artificiality, Levine’s film takes us through Adam’s stages of grief and delivers a light, affecting, modest, and enjoyable viewing experience that deserves to be seen, especially by anyone connected to someone marked by cancer—which is pretty much everyone.