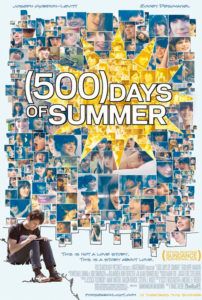 Too often, films about love and relationships contain the promise of a happy ending. Then possibly for the sake of realism or perhaps just to be different, they end on a downer note, leaving the audience unfulfilled. (500)Days of Summer makes no false promises. From the onset, an unknown narrator assures us that we’re not watching a love story. The romance here isn’t fanciful and doesn’t play out magically. Rather, the message is that love can and often does hurt. So while the film has romance, and it has comedy, to call it a romantic comedy would be inaccurate in the traditional sense.

Consider alleged romantic comedies like The Break-Up or The Terminal. Throughout these movies, the audience wants desperately for the guy and the girl to get together in the end. They don’t, of course, and so we’re left needlessly aching and dissatisfied, even while admiring the need for these films to be different. Sometimes audiences require a nice little programmer to live up to expectations, and sometimes we need something to appease our inner cynic (even if our inner cynic also happens to be a romantic, like the characters in this film). To identify which films are catering to which need, that’s the challenge. As a change of pace, it’s nice to know in advance where this story is going, if only so we’re not disappointed later.

The film’s structure reviews the 500 days where Tom (Joseph Gordon-Levitt) and Summer (Zooey Deschanel) have a romance, and it tracks their progress and collapse with a counter that reels to the day’s number. Detailed are the highs and lows, often bouncing back and forth between the early days and the final ones for dramatic effect. Told from Tom’s hopeless romantic perspective, the story begins when, one day, he sees Summer in his drab office where he writes sappy greeting cards. Full of ideals, he believes Summer is The One. And though it takes a few days to build up the courage to talk to her, eventually they’re well into a relationship. Or are they just friends? Tom doesn’t know.

Tom has a problem differentiating between “Expectations” and “Reality.” At one point in the film, a split-screen shows how the two categories drastically vary. We come to realize as Tom does that Summer refuses to promise anything; in fact, she blatantly tells him she’s not interested in a long-term commitment. And yet Tom pursues and remains in denial, deluding himself that she’ll come around when chances are she won’t. We know she won’t—we’re shown as much in some of the first scenes that depict the end of their relationship. On the flip side, Tom’s expectations are surreal, as shown in scenes from their brief “Honeymoon Period” where Tom’s elation takes over. One sequence set to Hall and Oates’ “You Make My Dreams Come True” features Gordon-Levitt moving through a 1950s-esque musical number; a crowd gathers for synchronized dance moves and a cartoon bluebird lands on his shoulder. His lows are just as animated, like when he sees himself as the knight in Bergman’s The Seventh Seal.

First-time feature director Marc Webb’s main stroke of genius, beyond constructing a perceptive and intelligent story about love, which is rare enough, was in casting his two superb, talented, and attractive stars. Gordon-Levitt has that same marked appeal and talent that Heath Ledger had. He’s made excellent gravitas-laden films like Brick and The Lookout, and since his 3rd Rock from the Sun days, he’s demonstrated his vast range. It’s likely that no one is expecting this actor to pop the way he will someday. His three-dimensional rollercoaster portrayal here creates one of the most tangible male characters in a film about romance you’ll ever see. And his costar Deschanel makes a charming leading lady opposite him. Thanks to her bright blue eyes highlighted in the film’s many close-ups, we see what Tom sees in her. But that’s the daydream, meant to be an illusion shrouded in Tom’s projections. When Tom has a reality check, Deschanel does well restraining herself to become cold and uncommitted.

Most surprising is the way writers Scott Neustadter and Michael H. Weber make Tom so affable, and how well Gordon-Levitt communicates that. How rare that a sensitive, grounded male lead is at the center of a movie about love. Typically female protagonists help define the target audience for something like (500) Days of Summer, but Webb has more up his sleeve than conventional, sparkly, yawn-inducing rom-com fare. By the end, you might squawk about some perhaps overly cutesy moments, the non-linear presentation, or Webb’s attempts to be offbeat. What you won’t find is formula or cliché bogging down the script or your enjoyment of the story. So don’t call this film a romantic comedy, because with that label comes so many bad associations. Instead, call this is a slice of romance, with all the potential elation and heartbreak offered therein.