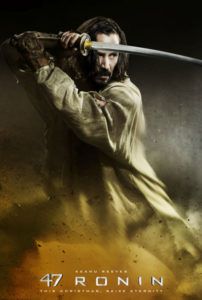 In Japanese, the word “Chushingura” refers to the tradition of retelling the legend of the 47 ronin. When there’s a specific word to denote the custom of telling this tale, there’s no disputing its significance or familiarity within Japan’s cultural identity. The legend dates back to 18th century feudal Japan, where feudal lord Asano Naganori is forced to commit seppuku for attacking an arrogant official named Kira Yoshinaka. To restore honor to Asano and exact revenge on Kira, Asano’s former samurai, now disgraced and masterless ronin, carry out their plan to kill Kira. In the aftermath, the ronin who nobly defended their master’s honor are themselves forced to commit ritual suicide as punishment. This story has been retold in various media formats, including novels, theater, comic books, opera, television, and multiple films, among them great versions in cinema by Japanese masters Kenji Mizoguchi and Kon Ichikawa. With 47 Ronin, Universal Studios put north of $200 million in budgetary dollars toward a Westernized, English-language version of this legend starring Keanu Reeves, and the result is nothing short of a disgrace.

A lack of faith in the material is evident in the screenplay by Chris Morgan (of the Fast & Furious franchise) and Hossein Amini (Snow White and the Huntsman), who have not only injected magical monsters and copious CGI into the proceedings but also concocted an excuse to make the legend in part about a “half-breed” outsider. According to the script, Reeves’ character named Kai was purportedly the love child of an English sailor and a Japanese peasant girl, raised by demons who taught him the art of killing, and later adopted by Lord Asano (Min Tanaka). Although rejected by Asano’s samurai, Kai shares a secret love with Asano’s daughter Mika (Kou Shibasaki). But the real story involves Asano’s samurai leader Oishi, played by the great Hiroyuki Sanada (from The Twilight Samurai and The Wolverine). After Asano is forced to commit seppuku and the villainous Lord Kira (Tadanobu Asano) takes over Asano’s lands by order of Japan’s ruler, the Shogun Tsunayoshi (Cary-Hiroyuki Tagawa), Oishi must gather the ronin loyal to Asano and return honor to their master. At the same time, Kai seeks to prevent Kira from marrying Mika.

Oishi begins by seeking out Kai, who’s been sold into slavery on a Dutch island and forced to fight ugly CGI creatures for sport. Once they regroup with the other ronin, making a total of 47 (though we only ever see a handful at any given moment), Kai guides them into a magical forest where they obtain glowing light-saber-esque swords from a band of bird-man monks. Now armed, they raid Kira’s fortress in a rousing covert attack. Oishi confronts Kira in a daring sword battle, while Kai takes on Kira’s shape-shifting witch (Rinko Kikuchi, playing a Lady Macbeth role), a spidery manipulator who transforms into a silly-looking dragon and spits fireballs. All the while, Reeves’ presence feels tacked-on in his character’s tragic, star-crossed lovers subplot, unnecessary to this otherwise dignified story of Japanese honor, perfectly articulated through Sanada’s restrained yet nuanced performance.

First-time feature director Carl Rinsch, who earned attention after a number of visually stunning commercials and his distinctive short sci-fi film The Gift, was slated to direct Prometheus before Ridley Scott decided to direct the film himself. And while Rinsch demonstrates his visual panache in a number of individual scenes in 47 Ronin, whole sequences are often muddled and ungainly either due to Reeves’ painfully dull screen presence or videogame-worthy special FX. The huge budget gave production designer Jan Roelfs (Gattaca) and costume designer Penny Rose (the Pirates of the Caribbean franchise) plenty of color and material to create an attractive production—complete with elaborate samurai armor, colorful ornamented robes, and expressively designed settings—except all of this artistry is strung together by a dull action yarn that engages in Chushingura only because its international box-office prospects seem assured.

Rinsch and his screenwriters attempt an ambitious undertaking with 47 Ronin, and at the very least, they remain true to the broad strokes of the legend—which is to say, the film doesn’t pull any punches by offering up a false happy ending by Western standards. However, this exercise of Chushingura loses its meaning through the film’s other crimes, such as fabricating absurd beasties and needlessly introducing a bankable Western star (who gets left by the wayside anyway) into the narrative. Bookended voiceover talks about the admirable traditions behind stories of the 47 ronin, but there’s nothing admirable about these wooden and underdeveloped characters, the film’s deficient emotional resonance, or the director’s evident preoccupation with visual elements over the film’s dramatic thrust. A superficial product of Hollywood excess and undersupplied dramatic weight, 47 Ronin is a vapid waste of the source material, which demands a treatment worthy of its history and legend.