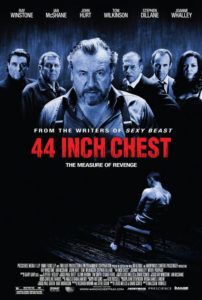 From Louis Mellis and David Scinto, writers of the 2000 gangster picture Sexy Beast, comes the very uncinematic 44 Inch Chest. The film, the first feature directed by Malcolm Venville, has more in common with a David Mamet play than the gritty drama it claims to be. The story consists of six men standing around a rundown abode for hours on end, talking and swearing in colorfully profane jargon, until they all realize nothing is going to happen. There’s certain brilliance to the setup, which suggests the high level of showboating among such masculine types. But given the anticlimactic ending after what feels like 90-minutes of nonstop build-up, the result is ultimately a letdown.

Of course, that’s the point. And it’s not that the point is lost in the film. It’s that the writers have failed to construct the story, which is about the utter fragility of the testosterone-laden male ego, with an appropriately tragic or engaging conclusion that underscores the theme’s potency. After all, what could be more devastating to a hard-boiled man’s man than to realize he’s soft inside? That’s precisely what happens to the film’s protagonist, Colin Diamond, played by the ultra-cool Ray Winstone. Colin’s wife, Liz (Joanne Whalley), tells him she’s leaving him for another man. Though sworn to avenge his masculinity, Colin finds himself unable to follow through and therefore questions himself.

Heartbroken beyond any hope of rational thought, and in a rage to learn the home wrecker’s identity, Colin beats his wife until she gives up the name of her new lover, a Frenchman. Colin calls his gangster mates to pick up the young man, dubbed Loverboy (Melvil Poupaud), who stole his wife. In broad daylight, they drag Loverboy out of his job to a safehouse. There they remain as Colin, weeping in shock, works though his pain and anger and confusion; they wait until he works up the courage to kill the man who ruined his twenty-plus year marriage. Most of the film takes place in a single room or two in the dilapidated underworld habitat. The wonderful dialogue is scathing, mean-spirited, and often hilarious. But where does the story go? Almost nowhere.

Along with Winstone, the cast is comprised of powerhouse British actors playing Colin’s friends. John Hurt is Old Man Peanut, the crusty, old-fashioned gangster whose views on defending one’s honor and manhood represent the sharp, archaic defensiveness of the male ego. On the opposite spectrum is Ian McShane (from HBO’s Deadwood), playing Meredith, a suave and successful homosexual who doesn’t mince words when it comes to his sexuality or the absurdity of Colin’s broken heart. In the middle are Mal (Stephen Dillane), who seems impatient with his troubled friend Colin, and Archie (Mr. Wilkinson), who lives with his mother and always tries to play the nice guy. They’re all waiting for Colin to make a move, thinking him somewhat over-emotional about the whole affair.

The crew is rather indifferent to the central drama of the story, which occurs mostly in Colin’s head, or between Colin and the non-responsive Loverboy. That’s another flaw in the story. Why not involve these otherwise interesting periphery characters more? They stand about telling each other stories or try to convince Colin to off Loverboy already, but they play no major role in the story other than filler. Their structural indifference distances the viewer from what should’ve been a suspenseful, claustrophobic drama, but instead proves to be quite uneventful.

Admittedly, I wanted to like this film. Hell, I wanted to love it. Given the cast, who wouldn’t? To be sure, the presence of these actors doesn’t let down—they light up the screen with their nuanced performances and delivery of some truly foul-mouthed exchanges (the word “cunt” is more frequent than derivations of “fuck”). Indeed, 44 Inch Chest is worth seeing for the acting alone. But no matter how well this impressive cast handles the expertly-written dialogue from Mellis and Scinto, they can’t make up for the underwhelming outcome of the story, nor the rather matter-of-fact direction from Venville. The story fails to work itself out into a satisfying finale like, say, the cleverly macabre ending to Sexy Beast. As is, the film, which might’ve worked as a play, feels unfinished and sorely disappointing.