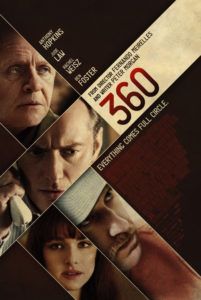 Arthur Schnitzler’s 1897 play La Ronde finds a modern counterpart courtesy of director Fernando Meirelles in 360. The play follows a series of characters from all walks of life having various sexual encounters; after two passionate lovers fall into bed, one of them might go off to meet their dull husband or wife, and so on. Each story leads to the next, each pointing toward a grander implication that love is transcendent and blind to notions of class. French master Max Ophüls made a wonderful adaptation in 1950, starring Anton Walbrook, Simone Signoret, and Danielle Darrieux, the material was a perfect showcase for Ophüls’ signature tracking shots and flowing camerawork, while his various stories were connected through a consistent carousel motif. Meirelles, whose City of God and The Constant Gardener and Blindness all explore the themes of human interconnectivity and coincidence, stretches his canvas far beyond Vienna, where Schnitzler’s play takes place.

Broadened into a globe-trotting series of destinations, visually connected through mass transit metaphors, cut with intentional abruptness and multiple split-screens, the film’s very large and very impressive cast barely has more than two or three scenes each with which to make their characters memorable. Appropriately, the film opens in Vienna, where a Slovakian woman (Lucia Siposova) wants to break into the high-end escort biz with the help of a sleazy webmaster-pimp (Johannes Krisch) who oversees a prostitution website. Her first client is shy British businessman Michael (Jude Law), who calls home to his wife Rose (Rachel Weisz) when his illicit rendezvous falls through. Distant, Rose is having an affair with Brazilian photographer Rui (Juliano Cazarre), whose girlfriend Laura (Maria Flor) learns about the affair and decides to hop a plane back to Rio, on which she meets an older Brit (Anthony Hopkins) who struggles to move on from the disappearance of his daughter. Laura’s flight is grounded at the Denver airport, where she meets Ben Fosters’ convicted sex offender, whose waiting for a plane that will take him to a halfway house.

And the stories keep going around and around until they find their way back to the Vienna prostitute, whose sister (Gabriela Marcinkova) falls for a criminal’s bodyguard (Vladimir Vdovichenkov). Far removed from the kind of genius mosaic film that Robert Altman popularized in Nashville and Short Cuts, some of the stories lead into one another, while others make superficial leaps to establish a connection. A Paris-based story about an Algerian man (Jamel Debbouze) with a crush on his Russian co-worker (Dinara Drukarova), has no lead-in at all. Few of the characters make surprising decisions or go anywhere meaningful. But the actors—a familiar-looking ensemble for audiences versed in international cinema—have time to shine in some scenes, especially Foster as a tightly wound criminal who’s stricken with temptation. Hopkins is given a long monologue in an Alcoholics Anonymous meeting; it’s powerful acting, but the scene has little to do with the overall theme of interconnectivity. The majority of the stories leave the audience wanting more, although the film has enough sense to finish the picture with a somewhat happy ending, creating the false impression that all of the stories have concluded, although really it’s just one or two.

The screenplay is by Peter Morgan, who also wrote Hereafter and Tinker, Tailor, Soldier, Spy, two superior films, both about an international cast of characters intersecting in fateful ways. The difference between those projects and 360 is that Morgan doesn’t find any overall significance in journeying from one place to the next. Random circumstances and the filmmakers’ loose visual associations seem to link the characters together. Oh, sure, there’s some bookend narration about people who come to metaphoric forks in the road, and in turn, they must (sometimes tragically) choose the direction that suits them best, but it doesn’t amount to any overarching purpose. In Hereafter, Morgan brought three people from separate countries together in a profoundly significant way, as they were all touched by psychic phenomenon by hook or by crook. Tinker, Tailor, Soldier, Spy used an international backdrop and ensemble cast to let a dense spy yarn play itself out. Both films came to satisfying conclusions.

Meirelles and Morgan leave far too many of their characters twisting in the wind by the end credits. We’re reminded of smaller characters because Meirelles uses split screens to show us how they’re floating through life at this moment. Only one of the stories seems to reach any finality, and that’s the one involving the prostitute and her sister. How the film comes “full circle” is an illusion, however, constructed via cinematic techniques of deception, rather than coincidences in the characters’ lives. The aforementioned “forks in the road” are never quite real, as certain characters (usually the ones we want to thrive most) are never given the opportunity. It would have been far more interesting to see more of the characters come this close to happiness, only to make the wrong choice. And though this happens on occasion, far too many of the stories lead to dead ends, and even fewer still feel wrapped up dramatically. What the film amounts to, then, is an actor’s showcase, but a very limited, not very compelling, or satisfying one.