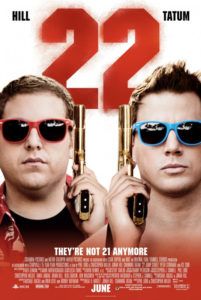 Jonah Hill and Channing Tatum’s undercover cops from 21 Jump Street return in a sequel to the big-screen version of the 1980s television show, and a hilarious “previously on” prologue reminds us of what happened in the original, complete with a nonsensical nod to Annie Hall. Indeed, 22 Jump Street is another meta-comedy from directors Phil Lord and Christopher Miller, creators of the ultimate “meta” experience, this year’s The LEGO Movie. Self-aware—almost certainly to a fault—of the diminishing quality and increasing absurdity when it comes to most sequels, the filmmakers take the same material from the breakout 2012 release and regurgitate it; however, because its approach has a self-referential pulse beating through every joke and visual gag, the material feels fresh. It’s a stale illusion, good for a few hearty laughs, but it ultimately results in an empty experience.

By both embracing its clichés and sending them up, Lord and Miller, along with their co-writer Michael Bacall, “own” the film’s formulaic storytelling through absurdist meta-humor. The conceit of this approach is that, while it attempts to satirize its own laziness by pointing it out for comic effect, the filmmakers aren’t interested in coming up with an alternative to the formula. “All they do is recycle shit from the past and expect us not to notice,” said Hill’s character Schmidt in the original, not that it bothered him or Tatum’s character Jenko. In 22 Jump Street, after failing to capture a crime lord named Ghost (Peter Stormare) in the slapstick opening action sequence, Schmidt and Jenko receive a deadpan lambasting from their chief (Nick Offerman), who tells them they’re no good as street cops. “Do what you did before,” he says. “That’s all anybody wants to see.” When they’re assigned another undercover mission, this time at a college instead of a high school, they’re told: “We’ve doubled the budget, as if that would double the profit.”

Tasked by their ever-shouting and scowling boss, Capt. Dickson (Ice Cube), with infiltrating the local MC State campus, our heroes adopt the alter-egos of Brad and Doug McQuaid to sniff out the drug dealer whose product has led to a student’s death. But the familiar setup is just an excuse to purvey an overabundance of humor steeped in ironic detachment. They report for duty to the address across the road from “21 Jump St.” and in the background we see signage for the “23 Jump St. Condominiums” under construction; but it’s only an ironic promise of a sequel—no different than the extended punch-line during the end credits, where we see the franchise’s future through “34 Jump Street” and beyond. This extended joke is a perfect summation of Lord and Miller’s approach, in which every joke that’s worth telling is worth beating to death, and then some. Before long, the viewer feels guilty for ever having laughed, because sooner or later the initial joke is no longer funny.

There’s another ongoing comedic strain in 22 Jump Street, both in form and function, involving improvisational humor. In one scene, Schmidt performs at the campus’ open mic poetry reading, resulting in some improv that impresses his artsy love interest, Maya (Amber Stevens); meanwhile, Jenko stumbles through acting off the cuff, and comic moments ensue where he proves he’s deficient in a skill otherwise required for undercover cops. Jenko would rather be his natural, jocular self with newfound best friend Zook (Wyatt Russell), the alpha-male, all-star quarterback on campus, who also happens to be the prime suspect. Only slightly better at improv are Hill and Tatum, who seem to be working through the majority of their scenes off script, half-smiling through their lines. And yet, this irreverent, casual, and semi-ironic tone to most scenes wears an audience down throughout the film’s nearly two-hour runtime. Fans of Jimmy Fallon should love it.

Several supporting characters lend the film its biggest laughs, namely Keith and Kenny Lucas as the identical twin stoners living across the dorm hall, and the über-sarcastic Jillian Bell as Maya’s embittered roommate. But soon the material devolves into a seemingly endless array of penis jokes, action movie clichés, and a borderline-homophobic running gag about Schmidt and Jenko acting like married partners instead of professional ones, all with shock-based humor that will have little value for repeated viewings. As frequent and riotous as the laughs are, the film’s recycling of self-aware commentary on its own status as a sequel is tiring, as is the half-hearted improv approach. The result is that 22 Jump Street feels like it was assembled in the editing room from scenes improvised on set that seemed, at the time, to go together, as opposed to a fully realized script. Even with the appeal of its leading men returning to their affable roles and their self-referential humor, the end product is no less a standard, disappointing sequel, no matter how much it acknowledges the fact.