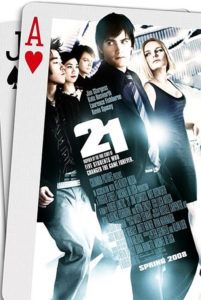 Here is a movie about math nerds-turned-gamblers that plays out no differently that every other Las Vegas-set drama—resolving that corruption corrupts, but what a wild ride! Director Robert Luketic’s based-on-a-true-story film 21 shines thanks to the same polish used to bring a glimmer to movie studio brass. By that I mean every detail seems to have sold itself to the house. Concerning organized blackjack card-counting, this pseudo-morality tale never resolves that gambling’s corruption has consequences because its characters are so uninvolved in the game.

We open on MIT, where fresh-faced wiz-kid Ben Campbell (Jim Sturgess, from Across the Universe) has everything going for him. Perfect grades. A flawless transcript. Graduating will be a cinch. And when his acceptance into Harvard Medical is confirmed, he realizes the $300,000 tuition won’t come from his low-wage part-time job. With an unlikely potential free-ride scholarship hanging in the balance, Ben conveniently finds a group of fellow MIT students asking him to join their card counting team, led by their slick professor Mickey Rosa (played by Kevin Spacey, reportedly based on J.P. Massar (Mr. M) and Johnny Chang—actual founders of the MIT team).  He reluctantly agrees to join, lured in by the feminine wiles of their brainiac-beauty Jill (Kate Bosworth).

Being a numbers genius, Ben learns the score and quickly becomes the head of their team, earns his Harvard tuition, but forgets about his desires to become a doctor. Lured by the escapist’s utopia that is Las Vegas, Ben loses himself, and, as he’s apparently never seen Casino, forgets that the city doesn’t take kindly to cheaters, even if card-counting isn’t technically illegal. Enter Cole Williams (a thick-looking Lawrence Fishburne), an old-school casino security chief who’s reached the end of his career, soon to be deemed obsolete thanks to casinos now implementing “biometric facial recognition software”—a technology that can see through disguises to find known counters from a registered database. Wise to every game in the book, Williams proves himself still-relevant by spotting the MIT team’s tactics, something the casino’s newfangled technology could never do. Trouble for Ben and his team ensues.

Changing its main characters to attractive white people, the cast of this Hollywood production goes against its source, the popular dramatized non-fiction novel Bringing Down the House by Ben Mezrich. Columbia Pictures’ executives decided to whiten-up characters from Mezrich’s original group of Asian-American gamblers, into pretty faces more suited for Gap commercials than MIT’s advanced mathematics department. The character Ben, for example, is based on Chinese-American Jeff Ma. And while the film’s team includes American actors of Asian heritage, like Jeff Yoo and Liza Lapira, both in considerable roles, the Asian American community is up in arms (notably angryasianman.com and asianweek.com) about Hollywood’s apparent mainstream “whitewash” of the cast.

Luketic, the filmmaker behind Win a Date with Tad Hamilton and Legally Blonde, goes to great effort in appealing to his target demographic, making his film annoyingly young and fresh—indeed, I felt like an old-timer during my screening, and I’m only in my mid-twenties! This blatantly PG-13 production includes enough cardplay swooshes and flashy editing tricks to induce a seizure, as opposed to taking its time involving viewers in the game. In fact, Spacey’s Mickey Rosa character likes Ben so much because he detaches himself from the game, making it emotionless, just about the numbers. And while Jim Sturgess is a fine actor, I don’t think Marlon Brando in his prime could make the silent skill of card-counting (a skilled use of logic and basic addition and subtraction) enjoyable to watch.

Gambling means never playing it safe since you’re betting against the house, as the odds are in their favor. With Luketic’s film, the odds are in the studio’s favor, and they’ve won—meaning, their product remains wholly safe and commercial. No doubt it will reap massive box office numbers it’s opening weekend. Appealing to that group of young men determined to copycat Matt Damon’s cool cardshark in Rounders (a film that knew if you’re to make cardplay interesting each hand must have its stakes), which inspired the recent pop-culture obsession with Texas hold ’em, perhaps 21 will initiate a newfound hipster trend in blackjack. Viewers normally glued to the television during Bravo’s celebrity poker championships (you know who you are) will likely find gratification in the film’s brief strategic merits, how few there are. For the rest of us, there’s nothing much here we can’t see on Las Vegas television commercials.