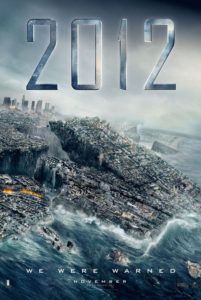 Everything you’re expecting from 2012 is exactly what you’re going to get. Roland Emmerich’s magnum opus is the pinnacle of his career. The director’s pithy efforts like Independence Day, Godzilla, and The Day After Tomorrow feel like small indie gems in comparison to this overblown, wonderfully destructive piece of demolitionist eye candy. Utterly impossible by any stretch of the imagination, the movie is a cheesy, one-dimensional, epic-sized spectacle that does exactly what it promises to—destroy the Earth. Audiences unwilling to dismiss reality for some very expensive entertainment by way of mass death and landmark obliteration will not appreciate its full effect.

As predicted by the Mayans hundreds of years ago, the year 2012 marks what they believe to be the end of the world. They even gave us an exact date: December 21, 2012. Emmerich’s movie opens near this point, as strange natural occurrences stir scientists to inquire about what’s happening. It seems neutrino bursts from the Sun are causing the planet’s core to boil, making the crust unstable and causing a whole lot of ruckus in the process. For the basis of his movie, Emmerich credits Charles Hapgood’s 1958 Earth Crust Displacement theory, but how the Mayans knew this would happen is never explained. Once the rumblings cause massive earthquakes to tremor, deep chasms to rupture open, super-volcanoes to blow, and tsunamis to roll, speculation into the Mayans’ curiously advanced methods of global ruin detection hardly matters.

Of course, there’s always some crackpot who no one believes, but who turns out to be right about his wild doomsday theories. And when the fit hits the shan, everyone regrets not listening to him sooner. Said nutjob is played by Woody Harrelson, who’s having fun playing his hippie radio show host-cum-prophet. His more respectable counterpart is chief science advisor Adrian Helmsley (Chiwetel Ejiofor), who warns the ever-grave U.S. President Thomas Wilson (Danny Glover) just in time. In a joint effort with various billionaires and governments, the world comes together to build arks in the Himalayas, but only a select few of the planet’s population and wildlife will fit on the arks. Regardless, the president’s chief of staff, Carl Anheuser (Oliver Platt), secures spots for the world’s elite on these ships, because there’s always a slimy character like this in disaster movies.

Most of the action revolves around Jackson Curtis (John Cusack), a failed writer turned limo driver for Russian bazillionaire Yuri Karpov (Zlatko Buric). Curtis’ ex-wife (Amanda Peet) and their two kids (Liam James and Morgan Lily) now live with the nice “other man” Gordon (Tom McCarthy), much to Curtis’ dismay. But you can believe that Gordon, along with 99% of the world’s population, gets wiped out, leaving Curtis and his estranged wife to rekindle their love. And why not? After learning about the arks from Harrelson’s wacko character while on vacation in Yellowstone, Curtis proves himself a superhero faced with the task of saving his family. He out-drives an earthquake and outruns the blast path of a super-volcano—impressive for a writer. Most of the bit characters in the movie are set up only to help Curtis along on his quest to reach China, and most die while carrying out their Good Samaritan deeds.

So what’s all destroyed in the movie? California falls into the ocean. All of America is covered by toxic ash. Las Vegas falls into a hellish crevasse, sparking a moment of irony, while Rio’s Christ the Redeemer statue and St. Peter’s Basilica in Rome topple over, killing many God-fearing Christians in the process. Emmerich spares no one, but he takes particular joy in depicting Christian icons crumbling. The John F. Kennedy aircraft carrier gets carted by a giant wave and crashes into the White House, marking the second time Emmerich has destroyed the president’s home. Tibet is waterlogged by a tsunami. And when it’s all over, the planet is covered in water.

Emmerich and his co-writer Harald Kloser arrange a series of near-escapes and ridiculous resolutions. The clichés are piled on top of one another in an almost comic fashion. There are only so many times a character can say “My God!” or “You have to take a look at this, sir” before the audience starts laughing. But there’s also the impression that the movie is fully aware of its own corniness, and we’re in on the joke. Aside from John Cusack outrunning planetary calamities, the movie’s many other characters outrun their own waves and explosions and what-have-yous in airplanes and cars and on foot. It’s all preposterous but meant in the escapist disaster movie spirit. Several shots feature a bystander gawking in awe of some terrible force approaching them, a familiar shot for Emmerich (borrowed from Spielberg). Plenty of nice characters undeservedly die, while irredeemable jerks are fully redeemed. And in the end, there’s an inappropriate feeling of hopefulness among the survivors, only because dwelling on the fact that virtually everyone on Earth is dead would be a major bummer.

The computerized special effects throughout are big and bold and staggering, and they should be since Emmerich’s budget was a reported $250 million. He uses that money to carry out his ultimate goal of obliterating the Earth, which has been a long time coming as those of us who have followed his work know. The action scenes unfold with clarity, so we always know what’s what, unlike the majority of over-edited blockbusters. Some of it looks shoddy and stupid, but the acting for this sort of drivel is above average, so the few CGI missteps are easily forgiven. Cusack and Ejiofor are both too good for the material, but they’re welcome protagonists. Harrelson, after his unexpected turn in Zombieland earlier this year, gives another memorable-if-throwaway performance. And Platt does a nice job making the audience despise him.

Defending Emmerich’s latest movie comes with some difficulty for this critic, since the director’s work is generally empty commercial fare, and the majority of his movies are unwatchably bad upon revisitation. So let’s be clear: This isn’t a “good movie,” but it’s an entertaining one. 2012 is trash, to be sure, but it’s well-assembled trash that’s bigger and better than anything Emmerich has made before. Shockingly, despite its 2-hour-and-40-minute runtime, this pageant of devastation keeps our interest for the duration. Never mind logic, because it’s defied in almost every scene. It’s even sort of fun to point out the clichés throughout. Thinking about it too much is missing the point of this mindless exhibition. Just sit back, eat your popcorn, and watch Emmerich destroy the world. Why else would you see a movie like this?