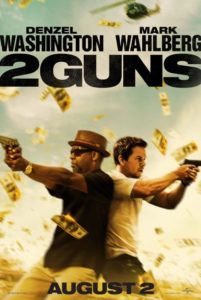 2 Guns is about little more than giving its stars Denzel Washington and Mark Wahlberg a vehicle to do their thing. Inside a scenario derived from Boom! Studios’ graphic novels penned by Steven Grant and drawn by Mateus Santolouco, these two actors play thin versions of their commonplace screen personas. Washington is the cocksure Bobby “Beans” Trench, an undercover DEA agent whose fedora and gold lateral incisors are the only ways to distinguish him from a dozen other Washington characters. Wahlberg’s brash undercover Navy Intelligence officer Michael “Stig” Stigman has only an ever-present stick of chewing gum to set the character apart from the actor’s usual tough guy routine. Together, they’re like countless other mismatched buddy cops, full of endless banter and macho behavior, except neither of them realizes the other is an undercover cop of sorts.

Seemingly partners in crime, Beans and Stig (which could’ve been the name of a lousy 1970s cop show) plan to rob a bank which will somehow help out each of their departments: The DEA wants to take down cartel lord Papi Greco (Edward James Olmos); the Navy wants the money to fund covert ops. The bank is supposed to house $3 million in Greco’s cash inside safety deposit boxes, but during the robbery, Beans and Stig find $43 million. It turns out the bank was a store for CIA super-creep Earl (Bill Paxton), and he’s out for blood to get his slush funds back. Meanwhile, Beans’ fellow officer and sultry ex-lover Debbie (Paula Patton) and his superior in the DEA (Robert John Burke) think Beans is in too deep. And Stig’s commanding officer Quince (James Marsden) reveals his plans are less than patriotic. Framed and pursued by a corrupt CIA and Naval Intelligence, not to mention the vengeful drug cartel, Beans and Stig finally realize they’re both cops, and they may be the only person whom the other can trust.

Through punchy, often unfunny repartee, Washington and Wahlberg maintain ample chemistry and keep us mildly entertained during the twisty proceedings, although the odd couple routine isn’t as effective as the filmmakers think it is. Screenwriter Blake Masters, TV writer for Brotherhood and Law & Order: LA, approaches the material with plenty of black, almost sadistic humor, and much of it falls flat. There’s a joke made (and depicted) about cruelty to chickens (think Sam Peckinpah’s Pat Garrett & Billy the Kid) which will disgust more than amuse. There’s also humor about a beheading, gunshot wounds, and other senseless violence that grows tiresome. Of course, both actors are likable and relatable, and such a quality goes a long way. They approach their roles with enough high-energy personality to distract from the fact they’ve each played these types of characters before.

The offbeat humor doesn’t extend to the solid supporting cast, whose roles are mostly serious and designed to keep the plot moving. Patton’s femme fatale has a conspicuous lack of development, making her eventual betrayal and the associated emotional impact less revelatory than it should have been. Paxton was born to play seedy villains, just as Olmos was to play wise ones, although Marsden doesn’t have as much fun with his baddie role as his costars. By the time everyone just so happens to show up at the final shootout at the same time, we can’t help but think of how convenient it all is. I was suddenly reminded of Sam Rockwell’s character from Seven Psychopaths and how he felt it was imperative to have a final shootout in crime movies, and then how that film’s writer-director Martin McDonagh satirized the predictability of such shootouts. When the action in 2 Guns reaches this predictable point, it’s hard to greet it with anything but a sigh and eye-roll.

Still, Icelandic director Baltasar Kormákur arranges a few exciting action sequences, and, after directing Wahlberg in last year’s Contraband, he demonstrates an improved clarity in his technical approach. His camera isn’t overly shaky, and everything in the frame is relatively clear-cut, even if, at times, the rationality of the plotting is questionable. Fortunately for the director and his film, Washington and Wahlberg would make Smurfs 2 watchable by their presence alone. As Wahlberg smacks on his gum and Washington fixes his fedora and fastens his gold teeth, you can just feel the filmmakers wanting these two to become a legendary movie matchup, like a modern Starsky and Hutch for R-rated movie crowds. This isn’t quite the case, even if all of it entertains in a bland sort of way for which the viewer doesn’t have to feel guilty. 2 Guns is conventional, and the sense of humor is somewhat caustic, but ultimately the mild chuckles and fast-paced exploits of Beans and Stig provide a lazy diversion the viewer will instantly forget once the credits start to roll.