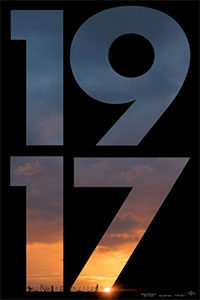 1917 does for the battlefields of the First World War what Steven Spielberg’s Saving Private Ryan (1998) did for the Normandy invasion. Sam Mendes immerses the viewer in wartime combat, using bold formal choices that recreate the visceral reality of war. Employing a never-blink approach, the film sustains its momentum in (the illusion of) a few unbroken shots, allowing the viewer to experience the chaos and dread of war through enthralling camerawork. The film’s director reteams with his Skyfall (2012) cinematographer, the great Roger Deakins, to accomplish something that has tempted filmmakers since Alfred Hitchcock’s Rope (1948)—to sustain a continuous take for an entire feature. The basic idea suggests that visible edits leave an unconscious break from the onscreen reality, and by eliminating those cuts, the viewer should feel more engaged. Instead, the formal bravado of 1917 distracts from its predictably harrowing story about duty and desperate survival. A passion project for Mendes, who co-wrote the screenplay with Krysty Wilson-Cairns and draws from his grandfather’s accounts of the war, the film’s formal indulgences distract from its dramatic potential.

Comparisons to Saving Private Ryan cannot be avoided. 1917 follows a small contingent of soldiers on a mission across the battle-worn French countryside. For our British heroes, the young Blake (Dean-Charles Chapman) and Will (George MacKay), the mission is the man. Across a vast expanse of pummelled earth and ruined cities, Blake’s brother fights in a battalion of 1,600 soldiers that will walk into a German trap if they’re not warned. A general (Colin Firth) assigns Blake and Will a daunting task: travel across miles of hostile landscape and deliver an order to the battalion leader to halt the planned attack. “He who travels fastest, travels alone,” says the general, who sends the two soldiers into the thick of it. Like Spielberg’s film, the journey unfolds in episodic fashion, with stops to fight the enemy or talk to French locals. When Blake and Will come across other soldiers, they’re often played by well-known actors, as if to imbue the encounter with some manner of consequence. Besides Firth’s single scene, Andrew Scott, Mark Strong, Benedict Cumberbatch, and Richard Madden also make brief appearances.

From the first scenes that follow Blake and Will through the trenches or across no man’s land à la Stanley Kubrick’s Paths of Glory (1958), the production feels like a compendium of great moments from other war films. When Will encounters a French woman living alone with a baby, the brief reprieve from war recalls when the POWs in Jean Renoir’s Grand Illusion (1937) escape and take a respite with Dita Parlo. When there’s a tense struggle with a knife between two enemies, we cannot help but think of Saving Private Ryan and the fate of Private Mellish. There’s a sense of going through the motions of the war genre, especially because Blake and Will have such blank everyman personalities. Doubtless, they were written as ciphers of British soldiers, representative of the whole. But their underwritten personalities might stem from the relentless forward motion of the story, which functions as an extended action sequence. There’s no time to waste on touching backstories or moments of rich characterization; they’re always moving from one dangerous situation to the next. It’s a quality that serves the film’s lasting intensity yet keeps the viewer at an emotional remove. 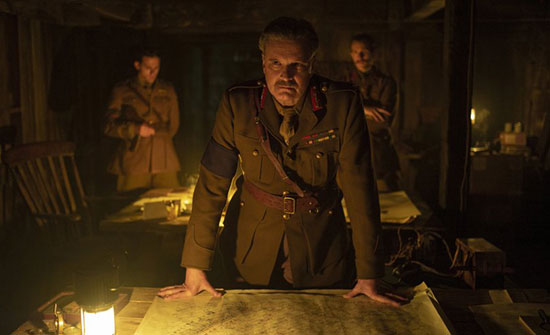 None of these remarks should take away from the technical achievement that 1917 represents. Much of my viewing experience was spent appreciating the virtuosity on display, particularly on Deakins’ part. His frame passes through an array of different light, from overcast skies to candlelit bunkers, and he achieves beautiful imagery in each. Though some of the earlier scenes feel like a feature-length walk-and-talk on Steadicam, the visual textures and settings have been rendered with a variety of lenses, captured in dexterous shifts between masters, close-ups, and everything in-between. Blake and Will’s mission should take just a few short hours; instead, the film unfolds over the evening and well into the next morning, a feat accomplished after a character finds himself knocked unconscious—one of many sudden breaks caused by violence or an explosion. Still, next to the last Mendes-Deakins collaboration, their essential 007 film Skyfall, the visual variety feels less pronounced (however, Deakins does repeat the image of a silhouette looking to a burning building at night).

While the visual splendor of 1917 is unquestionable, it’s central conceit—a film comprised of limited visible edits—distracts from its beauty. As is often the case with extended takes, what is meant to engross the viewer does just the opposite. It bewilders, leaving the viewer in a perpetual state of trying to figure out “How did they do that?” It’s easy to miss dialogue or plot elements when you’re preoccupied by how the filmmakers disguised their cuts. In some cases, you notice a slight blur as digital technology blends one shot to another. Other moments facilitate a shift from Shot A and Shot B with a millisecond CGI transition. Occasionally the camera makes a fast 180-degree turn to conceal an edit, whereas Mendes and editor Lee Smith resort to less elegant solutions as well. At one point, while floating down a river, a character passes behind a digital rock laid in the foreground. For all these attempts at immersion, 1917 does not have a really-there frame, like the handheld work in Saving Private Ryan. Rather, Deakins’ frame floats like an ethereal presence, gliding over bodies of water or looking down from a God’s eye view. It’s more formalist than enveloping.

In what might be seen as a coldly pristine presentation, a number of individual moments and images stand out from the others. A sequence involving a biplane that crashes into a barn leads to a shocking outcome. When Will balances on a destroyed bridge to cross a river, only to become a sniper’s target, it’s both gorgeous and a thrilling highwire act. The sight of British soldiers lifting a truck out of the mud, waterlogged bodies floating, and a breathless chase through the bombed-out bones of a city—they all linger in the mind. But 1917 plays like a film that has been rigorously planned and carefully executed, to the degree that every choice in the narrative and presentation seems schematized and orderly, thus draining the material of life. Thomas Newman’s score punctuates how the viewer should feel through every scene, and everything feels directed with a capital D. It’s an element underscored by the dramatic repetition of cherry blossoms or the bookend images of a soldier seated in a serene, grassy field. There’s a definite flourish of cinematic convenience working its way through the film, making it seem far more whimsical than war should. Indeed, 1917 is too preoccupied with itself as an achievement in filmmaking to make its characters or scenario resonate.