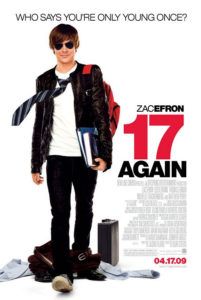 Twenty minutes into 17 Again, you can visualize the pitch used to sell this thing to studio executives. “Just think: Big meets It’s a Wonderful Life,” says some anonymous Hollywood agent. “We can’t lose!” Sign today’s hottest young twentysomething to play a teenager and yesterday’s favorite Friends star as the teen’s adult counterpart. Throw in wacky supporting roles for good measure. And you have yourself a surefire formula comedy with bankability and pop-culture appeal. Everyone shakes hands with big grins on their faces and lights cigars, while the filmmakers break out everything from 13 Going on 30 to Peggy Sue Got Married for some background.

The idea is a common one, because after all, who hasn’t wished they could go back and do some episode of their life differently? Mike O’Donnell (Matthew Perry) regrets giving up a basketball scholarship his senior year of high school to marry his girlfriend (Leslie Mann). Twenty years later, they’re getting a divorce because he blames her for his missed opportunities; he’s now staying with his rich fanboy friend Ned (Thomas Lennon). One thing leads to another, and Mike finds himself back in adolescence (now played by Zac Efron), which Ned believes is some kind of vision quest from a “spirit guide” so Mike can find the meaning to his life. Ned plays dad and enrolls Mike in the same high school as Mike’s troubled teenage son and daughter (Sterling Knight and Michelle Trachtenberg, respectively) to help work out their social awkwardness and thus resolve whatever his own issues may be.

Being a body-switch movie, there’s a device that causes the middle-aged version of Mike to transport into his younger shell. You’ve no doubt seen movies that use a wish-making machine, an ornamental skull, wishful thinking, late-night praying, and even an angel to make the swap. This movie has the silliest device of all, a mysterious janitor played by Brian Doyle-Murray (Bill’s brother) who wills body-change vortexes with his knowing smile. It’s never really explained what this janitor is up to. Does he get wings after helping Mike? Or does he just go back to sweeping up after high-schoolers? The movie doesn’t care, and neither should you—concerning yourself with such minor details is what spoils the embarrassing amount of fun had in a moviegoing experience like this one.

That said, here’s the shocker: the movie is pretty good, no matter how many times you’ve seen the whole body-switch phenomenon, and no matter how silly the McGuffin. Efron makes a likable leading man, er… boy? I’m not quite sure what he should be called, but he’s likable nonetheless, even if too much screen time is spent on young Mike waving aside his mopish hair. Those scenes where he tries to reintegrate himself among the cool crowd but fails are priceless, his long fatherly speeches on abstinence are funny, and those awkward, near-illegal scenes where he flirts with his character’s middle-aged wife and dodges advances from his teenage daughter are handled well.

Meanwhile, Perry obviously cashed a paycheck for his bookend appearances, and Mann makes a pleasant comedy leading lady, as we’ve seen before. But stealing the show is the wacky friend played by Lennon, best known from Comedy Central’s Reno: 911! series, though he’s been around since MTV’s mid-1990s cult sketch-comedy hit The State. His character’s nerdy fanaticism for Lord of the Rings and Star Wars presents something of a cliché for the Best Friend role, but it’s warmly played, stealing most of the film’s laughs away from Efron.

There’s really no logical argument for enjoying this movie besides it being lowbrow entertainment. As soon as you start to think about it, the whole appeal crumbles, and your inner film critic hangs his head in shame. Let the silliness consume you, and you’ll find it’s contagious. Oh, and a word of advice: Teenage girls giddy over the prospect of seeing Efron without a shirt will be giggle-crazy during the show, so best to see 17 Again on a school day afternoon when the kiddies are in class, lest you spend the movie trying to hear dialogue over the jubilant whispers.