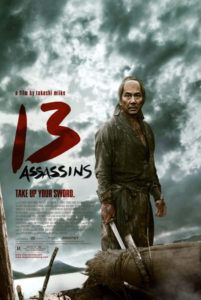 Kneeling in a courtyard, a brave samurai removes his knife from its sheath and proceeds to commit harakiri. He forces the blade in and pulls it across his stomach; the tearing sounds unbearable. His body trembling and his skin going pale, he removes the blade and starts another incision, this one vertical. Once he’s finished, he collapses into a pool of his own blood. In these opening shots of 13 Assassins, Japanese director Takashi Miike does something strange. Or at least strange for him. Instead of dwelling on the internal bounty flowing from the samurai, Miike communicates the scene on the warrior’s face, all his pain and determination evident. Coming from the director of gore-heavy pictures like Audition and Ichi the Killer, such restraint comes as more of a shock than if the piercing was shown.

Based on Eiichi Kudo’s 1963 jidai-geki (or period drama) of the same name, Miike’s remake remains true to the original in its broad strokes, while in the second-half incorporates the director’s penchant for bloody violence. Although, audiences with misgivings about Miike’s gore-centric side are encouraged to seek out this film to absorb another side of the director, but be warned, the violence here becomes graphic and plentiful, yet never exploitative, rather occurring as a natural course of battle or as a tool to build the villain’s infamy. In a scene where the  sadistic bad guy (and boy, is he bad), the Shogun’s brother Lord Naritsugu (Goro Inagaki), whose “lust for flesh” knows no limit, rapes a woman and then beheads her husband in front of her, the acts occur off-camera, as does the woman’s eventual suicide in shame. In another, we only see the result of Naritsugu’s savagery, when a woman whose limbs he removed and tongue he cut out testifies (in writing) to his cruelty.

Set during a peaceful era in Japan’s Shogunate-ruled feudal period, roughly twenty years before the Meiji Restoration, the film’s opening scene of ritualized protest concerns the samurai whose daughter-in-law was shamed and son murdered by Naritsugu. Struck by the samurai’s display and fed up with Naritsugu’s behavior, but unable to challenge his authority, Shogun official Sir Doi (Mikijiro Hira) decides to act. He contacts respected samurai Shinzaemon Shimada (Koji Yakusho, from Babel) and asks him to take out Naritsugu. Shinzaemon, who spends his days fishing in these peaceful times, shudders with anticipation, as this task might bring him an honorable death in battle, which he thought would be unattainable. When he accepts, Shinzaemon discovers that finding capable samurai in an era of peace is difficult, and settles on only twelve experienced men.

Amid the assorted samurai chosen by Shinzaemon, each of whom is given slight characterizations, is lowly hunter Koyata (Takayuki Yamada), who provides the film with comic relief. Yamada would be the equivalent to Toshiro Mifune’s rambunctious wannabe warrior from Akira Kurosawa’s Seven Samurai, a clear inspiration both for Kudo and Miike’s films. Shinzaemon’s plan to assassinate Naritsugu involves buying out a small village through which Naritsugu’s caravan will pass. Just as in Kurosawa’s masterpiece, the final showdown takes place in the village, this one booby-trapped by Shinzaemon’s men to trap and divide Naritsugu’s small army of over 200 soldiers and samurai. A glorious battle occurs over the final 45-minutes of Miike’s film, the violence motivated by our disgust with Naritsugu, the clarity of action superb and thrilling thanks to cinematographer Nobuyasu Kita’s steady frame.

Miike employs a classical jidai-geki approach without a hint of irony or satire, just severe scenes in the first half of political conviction and etiquette, whose seriousness is lifted by brief moments from Yamada’s comic relief. The genre’s archetypal theme of governments abusing their power is readily evident, with Naritsugu enforcing his authority through violence-fuelled fear, largely out of boredom. In one scene, he kicks a ball with indifference, and later he kicks a decapitated head in the same detached way. This man is a monster, and Inagaki portrays him with an eerie cold. On the flipside, however, is Yakusho’s moving performance as Shinzaemon, filled with honor and nobility. By the end, with the scenery so drenched with blood and scattered with bodies, Miike demonstrates that defending honor requires sacrifice, and only true samurai could make the bold sacrifices shown here.

Among the most prolific directors working today, sometimes turning out upwards of seven projects per year, Miike has delivered one of his very best films with 13 Assassins, if not the best. Filled with rousing music by Koji Endo, the outcome retains an epic style rarely seen in Japanese imports. Aside from some momentary inferior CGI used to render stampeding bulls set afire (which is, frankly, laughably bad), the production values are high, and the execution exhibits Miike’s skill. For his next release, which debuted at this year’s Cannes Film Festival, Miike has completed a remake of Masaki Kobayashi’s 1962 masterwork Harakiri, called Harakiri: Death of a Samurai. Produced by Jeremy Thomas and Toshiaki Nakazawa, who also produced 13 Assassins, the result could be worthwhile if Miike displays the same restrained, story-driven control that he does here.