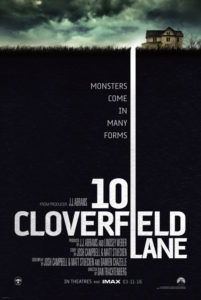 There’s a great sequence in Steven Spielberg’s War of the Worlds in which Tom Cruise and Dakota Fanning take shelter from an alien invasion in a farmhouse basement alongside a fanatical loner (Tim Robbins). First, they must contend with the man’s ranting and ravings; second, they must hide from the prying eyes of extraterrestrials bent on world domination. Producer J.J. Abrams ostensibly takes that incredible sequence and extends the concept to feature-length for 10 Cloverfield Lane, a superbly crafted thriller that serves as a paranoid three-character chamber piece. If Hitchcock had ever made a science-fiction picture, it would be like this—indeed, viewers will notice references to Psycho and Lifeboat scattered throughout. Stars Mary Elizabeth Winstead, John Goodman, and John Gallagher Jr. deliver tense, deeply human performances in a close-quarters environment. And director Dan Trachtenberg makes a wonderfully confident feature-length debut.

Curiously enough, the film is also a sequel that betters its predecessor both narratively and stylistically. In 2008, Abrams released the found-footage-style kaiju thriller Cloverfield with a brilliant marketing campaign that paid off in spades (his $25 million production, shot in secret, earned $170 million worldwide). Though that film followed, quite shakily, a group of twentysomethings who seemed incapable of making smart decisions, 10 Cloverfield Lane keeps its distance from that setup and is, what Abrams’ has called, a “spiritual successor” to the original. Shot for $10 million under the working titles “The Cellar” and “Valencia”, the Paramount release was originally written as a stand-alone story but was adopted into a Cloverfield sequel. Kept secret with Abrams’ usual bid for closed-mouth sets, the ingenious marketing campaign launched just a few short weeks before its release, an effectively mysterious strategy to maintain positive buzz.

Screenwriters Josh Campbell and Matthew Stuecken, who conceived the story with Whiplash‘s writer-director Damien Chazelle, open with a sequence reminiscent of Janet Leigh’s flight in the opening of Psycho, landing her in an equally inauspicious spider’s web. Michelle (Winstead) abruptly leaves her boyfriend and Louisiana behind and drives into the night to who-knows-where. All at once, a vehicle runs her off the road, and she crashes. When she comes to, she’s in a locked concrete room inside an underground bunker, held there by a large, gruff man named Howard (Goodman, excellent in all kinds of ways), who feeds her and tends to her wounds. He tells her that he found her in the ditch and saved her life; however, he won’t let her leave, because she cannot survive outside. Some manner of chemical or nuclear attack has made the air poison, and Howard, armed with a revolver on his belt, is prepared to spend the next couple of years down there.

Michelle learns she’s one of three people surviving in the underground shelter. Howard’s friendly neighbor, Emmett (Gallagher), broke his arm forcing his way into the bunker when Howard was closing its doors. Indeed, Howard, at his unhinged and scariest, demands acknowledgment and respect for having saved the lives of his two guests, who must listen as he spouts out conspiracy theories about “the Russians” and “the Martians”. Certainly, there’s some question as to the dangers that lurk outside and the validity of Howard’s claims. The apparent sound of cars and helicopters overhead leads Michelle to believe she’s been kidnapped or being lied to—or at least Howard has overestimated the threat outside. A shocking revelation leads to Michelle and Emmett’s acceptance that something dangerous lurks outside the bunker’s door, and gradually they become more comfortable with the idea of settling down for the apocalypse with puzzles, Howard’s movie collection, and his rather excellent jukebox.

Trachtenberg’s 2011 viral short Portal: No Escape, based on the popular video game series Portal, no doubt drew Abrams’ attention to the director. Instead of the wobbly handheld work of Cloverfield, Trachtenberg’s cinematographer Jeff Cutter delivers precise, clean lensing that carefully frames the action—from master shots that show us the solitude of the three characters inside Howard’s bunker, to the close-ups of Winstead’s large, expressive eyes. Those eyes show her terror wonderfully when she realizes Howard’s true nature and, along with Emmett, plots an escape. The film’s final third comes loaded with frightening developments, some that may be expected for viewers familiar with Cloverfield. Nonetheless, seeing the 2008 predecessor is by no means a requirement to get the full effect of this loosely tied sequel. Trachtenberg employs some very universal themes of claustrophobia, suspicion, and terror to writhe his audience in their seats.

Somewhere between Take Shelter, Room, and the aforementioned War of the Worlds, Trachtenberg’s 10 Cloverfield Lane works on multiple levels of suspense. This is self-aware, lean filmmaking, and Bear McCreary’s eerie orchestral score hits every note to poke the viewer and bond us to the material. The film knows exactly what it’s doing. It plays with our assessment of Howard several times, flip-flopping us between our belief that he’s a kidnapper, a savior, and a lunatic, all within a relatively short period. Goodman, who was perfectly cast, can and has before embodied each of those types with careful regulation. His performance is exceptionally good. Winstead’s turn proves she’s a criminally underused leading lady, while Gallagher brings dimension to a smaller role. With interesting characters, a stellar cast, terrifying revelations, and top-notch filmmaking in every respect, 10 Cloverfield Lane is a smart and effective thriller that would make Hitchcock proud.