The 41st Minneapolis St. Paul International Film Festival runs from May 5-19. Check here for the full lineup. Some films mentioned below will be reviewed separately in full-length writeups, but for now, here are some initial impressions of the festival’s second week. Look for another recap a week from now. Read about Week 1.

In the second week of the Minneapolis St. Paul International Film Festival, I found myself drawn to several documentaries. Many of them told stories about impressive human beings, some of whom rush into disaster zones to help others, while others try to bring joy to the world with their unique insights and spirituality. None of the films redefined or even challenged the documentary format, and I could see these rather straightforward projects landing on a streaming service in the near future to be consumed and forgotten. But let’s hope that’s not the case since each proved immersive, informative, and eye-opening in ways that make them easily recommendable.

Part self-exploration, part journalism, The Long Breakup follows Ukrainian-American Katya Solda’s search for identity. Although she was born in Ukraine and speaks mostly Russian, she now lives in New York City and works for Forbes magazine, so Solda wonders if she has been Americanized. Her parents, who still live in Kharkiv near the Russian border, tend to identify as Russian, but Solda interviews Ukrainian friends who yearn to preserve their independence. While raising these questions about herself and her country, Solda outlines the Ukrainian and Russian relationship through history, noting the many ways politicians (including American republicans) have supported Ukraine’s return to Russian rule. Although the documentary’s portrait of national identity offers a cultural primer, the film has limitations—especially given how thoroughly most of us have been immersed in headlines and news stories about Ukraine since Russia’s 2022 invasion. Given how the doc’s story, completed in 2020, ends with the toppling of the Lenin statue in Kharkiv and the rise of President Zelenski, it feels incomplete by no fault of its own. Elsewhere, its music score and Solda’s penchant for staged transitional scenes on bikes or reading newspaper headlines feel self-conscious and clunky. But if the technical package is amateurish and the investigation both timely yet undeveloped, Solda makes a worthwhile case that Ukraine has a distinct cultural identity outside of Russian influence.

More complete is Fire of Love, Sara Dosa’s multifaceted portrait of two volcano specialists. It’s reminiscent of Into the Inferno, Werner Herzog’s 2016 doc that admires the elemental sublimity of volcanoes. Dosa introduces Katia and Maurice Krafft, who died together in 1991, and explores their twenty-year status as celebrity volcanologists. The idiosyncratic French couple met under mysterious circumstances and quickly crafted a public persona for themselves with television interviews and lectures, in part due to their evident compatibility as a couple, but also their rather spiritual relationship with and scientific understanding of volcanoes. Dosa uses archival footage paired with filmmaker Miranda July’s oddly low-energy narration to reveal two oddballs drawn to volcanoes for different reasons. Some of the imagery is so incredible it looks almost fake, as though Dosa somehow used CGI (she didn’t) to create uncanny juxtapositions of Maurice dwarfed by a massive lava flow. Always, we grasp the puniness of human beings against the enormity of Nature, whether it’s Maurice standing on the cusp of oblivion or taking a raft into a lake of acid, or Katia explaining why what he’s doing is madness and irresponsible. The viewer gets a sense of their marriage and soulfulness, and by the end, we appreciate their influence and feel their loss. 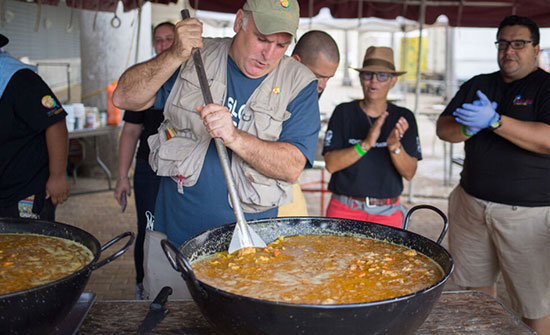 National Geographic Documentary Films picked up Dosa’s doc for distribution by Neon at Sundance this year. They also nabbed We Feed People, about Chef José Andrés and his nonprofit World Central Kitchen. The Spanish-born Andrés is a celebrity chef with a vast array of cookbooks, television appearances, and around 30 restaurants. But while vacationing in the Cayman Islands in 2010, an earthquake struck Haiti, and he felt compelled to act. The harrowing story details how Andrés put his chef’s skill of managing chaotic kitchens to use on a larger scale, coordinating massive relief kitchens in disaster zones with the help of funding from FEMA and the Red Cross. Ron Howard, who has directed five documentary features since 2013, shows Andrés’ desperate need to take action at hurricane and earthquake sites (a number that increases with each passing year), racing after them like a storm chaser—even if means he’s exhausted and straining his family life. The cook’s team supplies food prepared in a manner true to the local cuisine, keeping people fed while other relief efforts organize. Watching Andrés’ energy and passion is inspiring stuff, even if his selflessness could be questioned (after all, the documentary is about Andrés, not the causes that inspire him). If the movie’s activism borders on asking for a check from the viewer, it’s a check worth writing.

Much like Andrés, the subjects of Mission: Joy – Finding Happiness in Troubled Times help in the best way they know. The doc explores the friendship between Archbishop Desmond Tutu and His Holiness the Dalai Lama, two world luminaries from distinct backgrounds fraught with trauma. But directors Louis Psihoyos (The Cove) and Peggy Callahan showcase the playful relationship between them in their few encounters, and how they each developed profound compassion out of equally profound suffering. To watch them interact—both quick to smile, full of embraces, and beaming with wonderfully contagious laughter—is to see enlightenment. When an interviewer asks them, “How do you think about your own death,” their immediate response is a childish giggle, as though they long ago accepted death. Both share their stories and belief systems, and the filmmakers offer backstories compiled through archival footage and animated sequences. But more to the point is their philosophy of joy, backed by scientific research that proves: 1) Acts of kindness have a positive physiological effect on those who perform them, and 2) Happiness is a skill that must be learned and worked toward. The Dalai Lama notes that, “Everyone seeks joy from outside” from sources like money and power, yet he argues that joy comes from inside. Here’s a doc that makes the viewer want to learn more about the subject and take proactive steps toward bringing joy to the world. How many films can say that?

Certainly not Both Sides of the Blade, known as Fire in the US, about the irrational and destructive force of love. Although not a documentary, the IFC Films release finds French master Claire Denis reteaming with Juliette Binoche for the third time in a row after High Life (2018) and Let the Sunshine In (2018). Denis once again works alongside the latter film’s author, novelist Christine Angot, in another story about middle-aged love—albeit with a much less pleasant result. Binoche stars as a radio personality whose nine-year romance with an ex-con and former rugby champ (Vincent Lindon) comes to an impasse when her ex-lover (Grégoire Colin) returns to the picture and ignites old feelings. Lindon steals the film as a sensitive, interior presence with a Hellenistic physique, similar to his character in last year’s Titane. Their love triangle also takes place during the pandemic, and Denis finds casual ways of normalizing masks onscreen (something I haven’t been able to grow accustomed to quite yet). However, the film’s detours into pointed discussions about Frantz Fanon and racial politics feel like verbalized non-sequiturs here, whereas Denis usually symbolizes such discussions through poetic imagery. Setting those on-the-nose discussions aside, the terrific performances from Lindon and Binoche prove searing and worth enduring the film’s emotional evisceration.