The 41st Minneapolis St. Paul International Film Festival runs from May 5-19. Check here for the full lineup. Some films mentioned below will be reviewed separately in full-length writeups, but for now, here are some initial impressions of the festival’s first week. Look for two more recaps in the coming weeks.

Art and diversity shape the Twin Cities. A rich community of creatives, along with art, music, and film enthusiasts, give Minneapolis and St. Paul their identity, despite associations with overwhelming trauma in recent years. Maybe that’s why the 41st Minneapolis St. Paul International Film Festival (MSPIFF) feels not only like a return to normalcy but also a celebration and reclamation of an identity rooted in the arts. At least, that’s how Minneapolis mayor Jacob Frey framed The Phantom of the Open—a British comedy about the so-called worst golfer in the world—in his introduction to the festival’s opening night film. Frey linked the film and Twin Cities to the MSPIFF’s theme: “Shine Through,” suggesting perseverance and a clear expression of the cities’ character, regardless of recent events. The crowd-pleaser, a true story about Maurice Flitcroft, a blue-collar crane operator who shot his first round of golf at the British Open, resolves that, no matter what hardships occur, no matter at what stage of life, overcoming obstacles and fulfilling dreams remains possible. For the Twin Cities, that message means healing through a celebration of world cinema, and therein, embracing our community’s identity.

The MSP Film Society has a clear role in that journey. Since 1962, they have championed international and independent cinema for local moviegoers. In the past, their annual high point has been the MSPIFF, one of the most significant arts events in the region. But the pandemic put the in-person festival on a two-year hiatus—COVID-19 struck just before the 2020 festival, forcing organizers to pivot into a virtual event. Returning now in a hybrid model from May 5-19, the 2022 festival offers over 200 films from over 70 countries around the globe, including works by local filmmakers. Jesse Bishop, the festival’s programming director, also noted some “equilibrium” given that over 100 of the selections feature women-led creative teams. Overall, the festival seeks to “expose our audiences, in a unique way, to a rare mix of cultures, ideas, current affairs and notable filmmaking from around the world.”

Theatrical screenings at the newly refurbished MSP Film at The Main and virtual screenings at home give cinephiles statewide a chance to see movies outside of the usual multiplex fare. That’s the new directive of The Main, now under the oversight of the MSP Film Society. Although the old theater often featured the usual array of new releases found at any AMC or Emagine Theater chain, executive director Susan Smoluchowski aims to deliver a “true festival experience” throughout the year. Under a new 25-year lease deal, the MSP Film Society will ensure its screens showcase independent and international films—a much-needed injection of cinema diversity in the relatively sparse Minnesota arthouse theater scene, especially after COVID-19 put many smaller theaters out of business.

The Phantom of the Open launches the festival on a curious note. By the reactions in my screening, everyone in attendance loved the film. Even behind “strongly encouraged” masks, the roaring laughs and evident tears of moviegoers, many of whom returned to the cinema for the first time in two years, represented a clear need for this communal experience. Festival audiences tend to be more passionate, but the festival’s return after so long an absence seems to have accentuated that factor, creating a kind of live therapy. One can hardly blame the MSPIFF organizers for selecting the film, even if its status as an international or independent release remains qualified. After all, the English-language film will reach most US theaters on June 3, courtesy of Sony Pictures Classics, the mini-major distributor that specializes in accessible indies and international titles. Even so, the film meets the definitional guidelines of the festival. And moreover, MSPIFF attendees needed to be reminded why they love visiting the cinema.

Indeed, The Phantom of the Open isn’t exactly challenging, but that shouldn’t be held against it. Mark Rylance stars as Maurice Flitcroft, who early in life settles down with Jane (Sally Hawkins), a single mother at the time. Together, they add a pair of disco-dancing identical twins to their family unit, and by the mid-1970s, after about 18 years of domesticity, Jane encourages Maurice to pursue his interests. What interests? He doesn’t know—until he catches some golf on television. Instantly fixated on playing in the tournament, Maurice sets out to teach himself the game. Finagling his way into the competition, he plays alongside seasoned professionals, and his record-bad score earns him respect as the “People’s Golfer,” at least among common folk. Unfortunately, the tournament’s stuffy director (Rhys Ifans) refuses to let Maurice continue in the tournament, turning the movie into a comic underdog story about an unlikely hero defying elitists. Although the boilerplate class conflict plays out predictably enough, complete with an epilogue showing footage of the real-life Maurice Flitcroft, director Craig Roberts shows a strong command of tone and pacing. Working from the John Schlesinger and Martin Scorsese book of directing, Roberts’ production is slick and visually playful, despite the drab ‘70s costumes and color palette. Even if this basic structure has been used in countless based-on-a-true-story movies before, it’s the heartening performances by Rylance and Hawkins that elevate the film and invite applause. 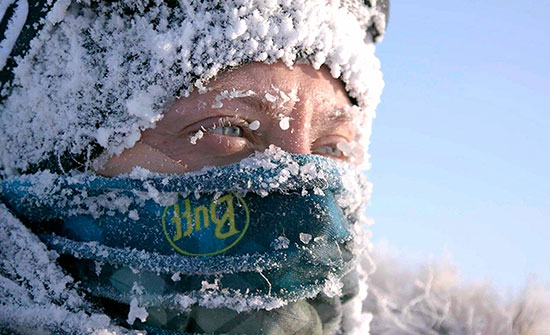 Another conventionally structured film is Exposure, a stirring documentary from author, travel host, and filmmaker Holly Morris. The doc tracks a group of 13 women (all English-speaking) from the West and various Arab cultures (sorry, Far East) who train over two years for an expedition to the North Pole on skis, pulling heavy cargo on sleds behind them. “It’s always the men going on adventures,” says Misba, a Muslim woman from the UK on the cusp of turning 50. But Morris tells the story of independent women who believe in testing their limits in the planet’s most extreme environments. Their elaborate training regimen—physical, psychological, and team building—takes them from Iceland to a desert in Oman, and the eventual arctic journey tests them further. Not only does Morris capture the way the women (who hold jobs such as an IT manager, art curator, journalist, and marketer) interact and sometimes struggle to form close female relationships, but she also explores how climate change has made the North Pole even more dangerous than just the usual polar bears and sub-zero temperatures. Their journey may be the last of its kind due to the unpredictable ice conditions due to climate change. Still, the film checks a lot of boxes in terms of thematic heft, sociopolitical contexts, and visual brilliance, balancing them all to fascinating and inspiring effect.

Similarly inspiring is another doc, Gabby Giffords Won’t Back Down, about the former Arizona Congresswoman who, in 2011, survived a gunshot to the head in a shooting that left six people dead. Julie Cohen and Betsy West, the co-directors of RBG (2018), My Name Is Pauli Murray (2021), and Julia (2021), continue their work in telling stories about influential and often politically significant women. In Giffords’ case, the filmmakers detail the Congresswoman’s career, political centrism, and long road to an unlikely recovery. Her husband, astronaut-turned-senator Mark Kelly, documented his wife’s progress from physical and cognitive therapy to overcoming much of her aphasia. Of course, the doc doubles as a testament for stricter gun control measures, carefully reinforcing that Giffords remains a gun owner while recounting the dozens of mass shootings in recent years. She does not want to eliminate guns, just prevent them from getting into the hands of the wrong people. The filmmakers speak to Barack Obama and other familiar faces about their subjects, both human and political, mainly preaching to a converted viewership. Although there’s nothing exceptional about the techniques used here—talking heads, archival footage, news clips—Giffords’ story and recovery remain incredible. It works better as a human interest story than a political tool.

Continuing the theme of films about women, it’s difficult to imagine a better film at MSPIFF than Happening (L’événement), a decidedly germane period drama from French director Audrey Diwan. Based on the memoir by Annie Ernaux and winner of the Golden Lion at the 78th Venice International Film Festival, the story takes place in 1963, when abortions in France were illegal, and the pursuit of one could land both the doctor and patient in jail. Anamaria Vartolomei delivers a terrific, nuanced performance as Anne, a literature student at university with a promising future. However, when she gets pregnant, Anne knows she cannot stay in school with a child, and parenthood would disrupt her future, so she seeks to terminate the pregnancy. Cagey, tense conversations with doctors and unsupportive friends make Anne’s situation increasingly desperate, and Diwan’s use of the boxy Academy aspect ratio symbolizes the character’s impossible circumstances. With minimal music and intimate camerawork that places the viewer in Anne’s subjectivity, the film details a world where female sexuality is stigmatized and marginalized, and reproductive rights remain out of a woman’s hands. Diwan’s visceral and unwavering depiction of Anne’s experiences challenge Cristian Mungiu’s 4 Months, 3 Weeks and 2 Days (2007) in their queasy reality, causing audible gasps, recoiling, and “I can’t watch” reactions among viewers. Regardless, given recent current events in the US that threaten Roe v. Wade, Happening felt achingly vital, capturing a world that wasn’t so long ago and could, in America, return. Although the film could have become preachy or didactic, it remains inside Anne’s personal journey and is more effective for it, delivering my favorite feature at MSPIFF so far and the best film yet released in 2022.