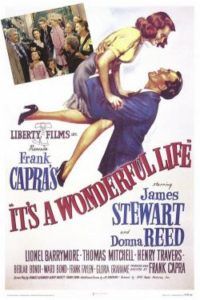 Up until a couple years ago, I had never seen Frank Capra’s 1946 Christmas classic It’s a Wonderful Life. Like Batman, from Batman: The Animated Series, says of the film in the episode titled “Christmas with the Joker”, I just could never get passed the title. Call me a Scrooge or a Grinch, if you must. Then my significant other convinced me to watch it with him, appalled that I had never seen the heart-warming film, and I instantly found it to be the most depressing Christmas movie I had ever seen.

The main character, George Bailey, played by James Stewart, spends his life sacrificing his own ambitions for the good of others. His dream of leaving the small town of Bedford Falls to see the world and “build things” is constantly postponed for one reason or another. His father dies, and he has to defer his trip to Europe to make final arrangements for his father’s business, the Bailey Building and Loan. The board threatens to shut down the business, based on the wishes of the money-grubbing Mr. Potter (Lionel Barrymore), unless George stays on to run it. George sacrifices his world travels and his college ambitions. He gives his tuition savings to his younger brother Harry (Todd Karns) to go to college in his place on the condition that, after his graduation, Harry would return home and take over the family business. Of course, when Harry does return home, he’s married, and his new wife’s father has offered him a promising job. George seems to concede to marriage and a family with Mary (Donna Reed), who he truly loves, but feels held back by.

After half a lifetime of sacrifice and let down, George finally snaps when batty Uncle Billy (Thomas Mitchell) misplaces $8,000 of the Building and Loan’s money on Christmas Eve. Uncle Billy, while at the bank preparing to make a deposit, places the money in a newspaper and, distracted by a confrontation with Mr. Potter, accidentally hands the newspaper—the livelihood of the Bailey Building and Loan tucked between its pages—over to the malicious Mr. Potter. George tries to help Uncle Billy remember where he left the money by retracing his steps, but it’s no use; against his better judgment, George goes to Mr. Potter for help, only able to offer his $15,000 life insurance policy as collateral. Mr. Potter refuses these terms, saying that George is worth more dead than alive, and accuses him of abusing his position at the Building and Loan—even though it is he, Mr. Potter, who has hidden the money. He calls the police to arrest George, who flees the office to get drunk and contemplate suicide. But not before snapping at his wife and kids and scoffing at their shabby house and uneventful lives. His attitude towards his family is hostile and cruel, as he is consumed by his own self-centered feelings of failure. 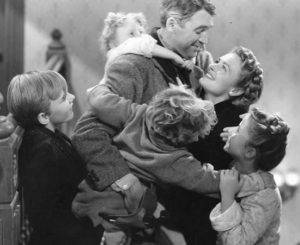 They say that the number of suicides increases around the holidays. After my first viewing of this film, I had to wonder if it was the cause. Nothing says Christmas like contemplating missed opportunities, shattered dreams, a seemingly mundane life, and then determining death is looking pretty good. The viewer feels bad for George as his dreams seem to become more and more distant. At the same time, you have immense sympathy for his family—particularly his wife—as he constantly reminds them of how small and insignificant he feels his life has been with them.

Although the majority of It’s a Wonderful Life feels like a downer, the happy payoff resides in its ending—something I didn’t quite grasp in my first viewing. It’s funny how a person’s mood can determine their appreciation of a film. I think, the first time I saw It’s a Wonderful Life, I was hung up on George Bailey’s overall negative attitude, and grew annoyed with his lack of appreciation for his comfortable and very rewarding life. He has a loving family, a home that’s a little run down but full of sentiment, and his own business in a town that adores him. What’s his problem?

My yelling at the television screen wasn’t convincing George Bailey of anything. Luckily someone stepped in to convince him for me. After hearing the prayers of those who care about George, an angel named Clarence (Henry Travers), who had not yet received his wings, is sent to dissuade George from taking his own life. Clarence shows George what the world would be like had he never been born, allowing George to realize that although he didn’t leave his mark on the world by designing new buildings and planning modern cities, he left a much greater impact by building friendships and creating a better community by saving it from the likes of Mr. Potter. He made life better—a lot more wonderful—for the town of Bedford Falls. And only when all he loves is taken away from him in Clarence’s alternate reality does he realize how much he should value his life.

George, finally finding happiness and appreciation for his life, comes out of the experience a changed man, realizing he already had more than most: a wife and children he loves and who love him, and friends in abundance. As Clarence says, “No man is a failure who has friends.” This becomes literally true, as all the friends George made throughout his life donate money to get him out of his financial bind. The Bailey Building and Loan is saved. And Clarence earns his wings through his eye-opening act. 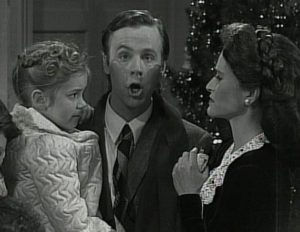 When I watched the film for the second time, I realized that by dismissing the change of heart George Bailey experiences in the final moments, I was missing the whole point of the story. Perhaps the filmmakers did too good a job presenting George’s already happy life in the first part of the movie, because by the end I just didn’t understand why he didn’t figure it out sooner. We must see George discover how wonderful his life is and watch him realize that what he really wants is right in front of him.

However happy I now believe the ending to be, there’s still that part of me that wants Mr. Potter to get his comeuppance. For those of you who are with me on this one, I recommend watching Saturday Night Live’s long-lost ending to It’s a Wonderful Life (available on the Saturday Night Live Christmas DVD), where Uncle Billy (played by Phil Hartman) halts the singing of “Hark! The Herald Angels Sing” as he realizes that Mr. Potter took the money. Dana Carvey, doing his hilarious James Stewart impression, declares, “Well what are we waiting for? Let’s go get him!” The whole town of Bedford Falls marches off, mob style, to beat the hell out of Mr. Potter, all the while keeping up the holiday spirit by singing “Auld Lang Syne”, the song traditionally sung on New Years Eve.

If only the film’s writers had taken it that extra step further, I could call this film a truly satisfying viewing experience… I suppose, though, in keeping with the spirit of the holidays, the ending works as is; it serves as a positive reminder of people’s potential to be good and generous, and to show gratitude for all that we have, no matter how dire life may seem sometimes.