So much has been written about the classical phase of the Western. Genre fans and, for the most part, critics alike have accepted with open arms the idea of a temporally delimited phase in the genre’s evolution wherein its “classical” roots had been established and set. Questions of the actual validity of this common-held notion are often few and far between, and its convenience as a critical descriptor and ideological counterbalance appears to justify its existence. The issue is not the lack of clear signifiers appearing in earlier Westerns across an expanse of films that can readily be understood as of a type of classicism; rather it is the idea of a linear evolution that the genre followed from its earliest origins in literature and the screen to the contemporary era. Even more problematic perhaps is the conception of a circumscribed classical phase birthed in the literature of James Fenimore Cooper and Owen Wister, then carried over to the cinema into the early silent Westerns of John Ford and others before meeting its demise when the genre became increasingly self-conscious and non-traditional in the post-World War II era.

Tag Gallagher’s aim at demystifying this conception appeared in his “Shoot-Out at the Genre Corral: Problems in the ‘Evolution’ of the Western,” where he deconstructs the problematic view of a chronological and equally orderly evolution of the Western. Gallagher points out the flawed theory of generic evolution posed by highly-influential scholars and critics such as Andre Bazin, Robert Warshow, John Cawelti, Leo Braudy, and Thomas Schatz. Schatz proposal of “various clear stages” of genre evolution in his work, Hollywood Genres, begins with the “experimental” then moving to the “classical” before smoothly transitioning into “refinement” and finally “mannerist” (self-consciousness). Many genre critics, including Schatz, see the classical phase as the period in which the genre’s conventions become established and thus solidified into what he calls “formal transparency” (38).

For the Western, the primary narrative pattern sees a nomadic individual, a stoic hero, often motivated by a sense of justice or revenge protecting a defenseless, civilized community from the savagery of outlaws or Indians in the American West between 1860 and 1910. The Western hero is often a kind of mediator between civilization and the lawless frontier, despite his own social status of being a marginalized figure from outside the boundaries of the community and ultimately is the most pervasive symbol of the rightness of white America’s claim to manifest destiny. Thus, the classical Western serves as the nation’s foundational myth with its hero positioned centrally as the primary focus and impetus and his self-prescribed moral code becoming the ultimate determinant of the action. In short, the existence of a classical phase is predicated upon the idea of a repeated, recognizable pattern, a formula that can readily be seen throughout the period it is claimed to have taken place. While it is evident that many film Westerns starting in the silent period and ending in the 1950s did indeed expound on this foundational myth, carrying over the genre’s key conventions and fully committing to these aforementioned patterns in what can be seen as a classicism of sorts, it does not constitute a strict phase or period of evolutionary history where one type of patterned formula was the only gun in town. 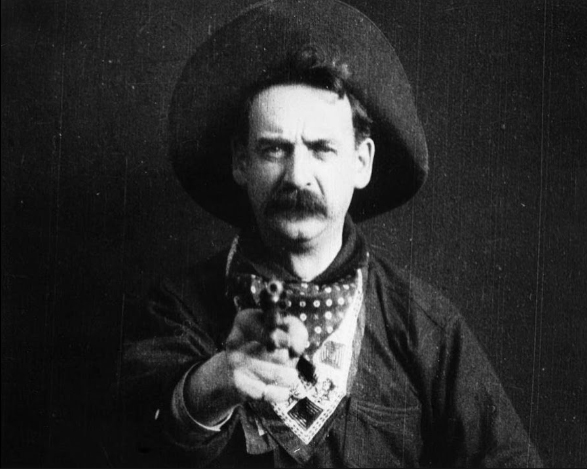 According to film theorist Andre Bazin in “The Evolution of the Western,” the classical period is demarcated by a “historical realism” and only when this phase has ended, and the genre has reached a type of perfection, do we see changes to its conventions (50). While this seems logical on the surface level, it appears to raise the critical ire of Gallagher who rightly points out how Edwin S. Porter’s The Great Train Robbery (1903), widely regarded as the first Western, features one of the most famous moments of self-consciousness in the history of the cinema: “The use of the anti-hero’s close-up firing, outside of the movie’s diegesis, at the audience constitutes a species of self-reflexivity” (248). If the devil is truly in the details for the Western, the critical codex is hardly holy. The problem is the sheer number of films produced within the genre, most notably in its earlier decades, which makes it an impossibility to make accurate generalizations about the evolution of the Western in taking into account the entirety of the corpus. Traditional critical approaches have been to concentrate squarely on a limited number of films or directors in order to draw their theoretical framework. While this method has proven to be highly illuminating in some ways within the study of the genre, in others, especially in evolutionary terms, it can be utterly misleading. Making broad generalizations about an entire species predicated on the study of a limited few has very rarely led any serious research into an ultimately fruitful territory.

Claims of a distinct classical phase have led to some odd contradictions in genre studies for decades. Many critics and scholars, including the aforementioned John Cawelti, a leading genre scholar of the Western, see the classical phase of the genre starting in its literary incarnations and then meeting its demise in the cinema sometime in the 1950s. However, another reputable Western scholar Jim Kitses, in his “Post-Modernism and The Western,” makes mention of what he calls a “counter-tradition” existing as early as 1942 with William Wellman’s politically and socially charged The Ox-Bow Incident (17). In fact, this counter-tradition is not isolated to a few films of the time but is readily apparent in Wellman’s Yellow Sky from 1948, Henry King’s The Gunfighter from 1950, Nicholas Ray’s inversion of tradition with Johnny Guitar in 1954 and Samuel Fuller’s Forty Guns from 1954. For Kitses, all of these films fit the criteria of a counter-tradition existing alive and well at the same time as the proposed classical phase of the Western. Kitses does mention that it is possible to see these films as a “precursor” to a counter-tradition rather than a counter-tradition itself, yet how can this classical Western phase be entirely self-contained and indicative of the whole of the genre when films from within were subverting the classical tradition right from the very start? Gallagher further illuminates this inquiry by pointing out how “self-reflexivity in the early teens was often evident…all methods of critiquing generic conventions” (250). In melding these distinct critical perspectives together, it would appear that the same type of counter-tradition evident in the 1940s and 1950s can be said to be manifesting itself from the birth of the genre as a cinematic entity.

With all of this in mind, it is perhaps instructive to consider some of the evidence. William Wellman’s The Ox-Bow Incident is a film that was released in 1942, placing itself within the heart of the alleged classical phase. The film is also an exemplar of Kitses counter-tradition and features a whole host of classical genre anti-conventions, most notably the lack of a Western hero. While the casual (or even somewhat critically-minded) audience member may see Henry Fonda’s Gil Carter as the film’s hero, it is likely they have been misguided by the iconographic status of Fonda himself coupled with the clear intentionality of Wellman using this subversion of his performer’s status as a means to subvert the generic status quo. Audiences of the time were likely just as diverted, if not more so, as Fonda had just gotten off a stint with director John Ford portraying such larger-than-life heroes as Abraham Lincoln in Young Mr. Lincoln (1939) and Gilbert Martin in Drums Along the Mohawk the same year. Yet The Ox-Bow Incident features no such hero; Fonda’s character actually goes along with the blood-thirsty mob to avoid his own neck finding the noose. The classical Western hero is nowhere to be found here. Carter is hardly a mediator between civilization and savagery, as it is the community that becomes the manifestation of barbarity as they wrongly condemn a trio of innocent men. 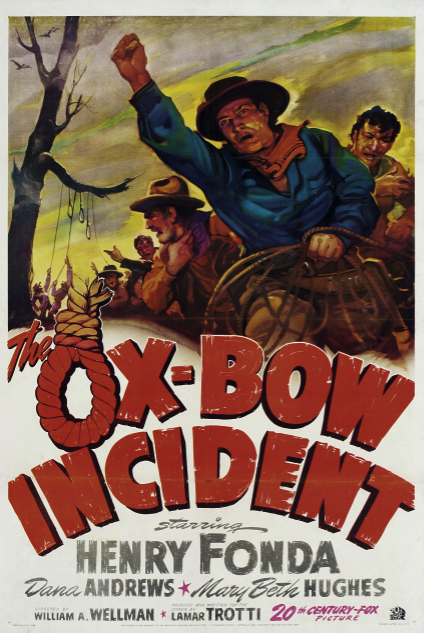 The classical Western hero’s moral code and sense of justice is equally absent in Carter (or any character for that matter, although a few eventually stand up against the mob), and the forging of a national myth articulated by other films of the period is wholly inverted here with the film instead painting civilization as psychologically unstable, inherently ugly and needlessly thirsty for any sort of violence that could stand-in for entertainment. The film visually articulates this notion in the form of Monty Smith (Paul Hurts) whose lazy-eyed look, slurred speech, and disheveled appearance reflect the repugnance of this ideal. More importantly, Smith is the one who physically holds the noose in town during the gathering of the lynch mob and on more than one occasion calls for the execution of seemingly anyone whose neck fits the rope. Wellman’s camera is exceptionally unsympathetic towards Smith, further distorting his face in uncomfortable close-ups as he laughs and appears almost unnaturally excited for the prospect of execution. Here the nation is not being forged in a flurry of mythical rightness; rather, it is succumbing to the brutal savagery bubbling up from within. With the lack of a definite hero, the absence of a monolithic moral code is occupied by a distinct moral ambiguity that the community largely shares, and despite the good intentions of a select few is the primary voice of blind action and injustice.

Wellman’s film also rejects the classical symbolism of the heroic white Western hero as the purveyor of rightness for manifest destiny. With no hero to speak of and a crazed lynch mob emblematic of civilized society driving the action, The Ox-Bow Incident also presents us with an inherently racist depiction of post-War society exemplified when the mob immediately points the finger of accusation at the lone Mexican (Juan Martinez) upon finding the soon-to-be-hung trio of men. Because he doesn’t “speak American” (although Martinez does speak eleven languages), the Mexican is automatically guilty of the crime. The implication appears to be if he cannot speak for himself and attest to his innocence, he is undeniably guilty. The overtly racist sentiment here becomes the fuel for indictment and the means for a form of malignant justice, which acts as both a commentary on the forming of communist witch hunts of the time and a critique of the classical Western’s glorification of veiled racism.

While The Ox-Bow Incident is just one film within the Western’s parallel counter-tradition existing as far back as the first two decades of the twentieth century, it does provide the model of a mature form of the Western that existed in direct contradistinction to generic classicism. Thus, the classical phase proposed by various critics appears to be no more than a viable critical method of compartmentalizing in order to build distinct theoretical frameworks rather than a key component of an actual evolutionary tract.

Matthew Jones is a teacher of Film, Photography, Media and Journalism at Arizona Conservatory for Arts and Academics in Phoenix. His research and interest focus on genre theory and criticism, although he is equally fascinated with film theory, history, and aesthetics. He is also a cinematographer and photographer who has the luxury of the desert in his backyard. Matthew holds a BA in Media Studies from the University of North Carolina-Greensboro and an MH in Art and Visual Media from Tiffin University.