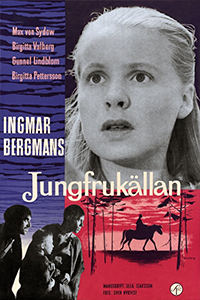 Some auteurs have periods in their work that consist of several films in a row with persistent themes or visual techniques. Just as Picasso had a Blue Period, Swedish filmmaker Ingmar Bergman’s filmography could be understood through its various phases—from his increasingly distinct early films beholden to the Svensk Filmindustri house style, to his more independently created and experimental films in the 1960s and 1970s, followed by his late television output. As filmmakers move from one period to the next, sometimes the most fascinating examples of their work occur in the transitions between phases. The Virgin Spring (Jungfrukällan) is such a film. It’s unlike anything else in Bergman’s body of work, which the director and many critics and scholars of his work have held against it. But to whatever degree the film looks like a straightforward medieval tale with religious underpinnings, it raises questions of faith in a manner true to Bergman. Its setting in a time of transition from paganism to Christianity in Sweden’s history mirrors the filmmaker’s interest in this story at this time of change in his career. The Virgin Spring’s anomalous state finds Bergman using an uncharacteristic improvisational directing style and brutally austere filmmaking to question how religions inadequately explain human behavior, in particular humanity’s violence and cruelty.

The full 3,600-word essay is currently posted on Patreon. Join Deep Focus Review’s Patron community, and you’ll receive exclusive access to this essay and many other reviews and blogs published on Patreon first.