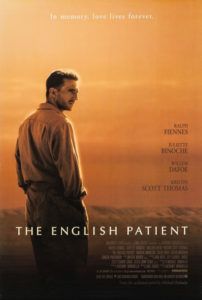 Built layer by breathless layer, The English Patient has no need to construct its story according to chronology. From the labyrinthine novel by Michael Ondaatje, writer-director Anthony Minghella adapted a text from which he could develop his own desire for emotion-guided storytelling, versus concern for staid sequential order. Minghella’s objective allows for a narrative progression that feels natural according to basic intuitions; the timeline therein does not move forward but rather in abstract directions, yet always with an emotionally guided destination. Pieces of the past come together to inform the present, memory fragments arranged out of order seem rightly placed, and pathos channels scenes and characters within the film’s composition. While preserving the structure of Ondaatje’s celebrated book, Minghella’s arrangement of time proceeds cinematically. His method contains temporal and geographical transitions that shift in poetic, emotional, though perhaps not logical ways. But they work on film, and augment the magic of the cinema. The story tells the audience what they need to know when they need to know it. Much like jazz music or expressionist art, the film moves forward through perceptive changes in time and space that make sense only when appreciated as a whole.

And yet, Minghella’s film exhibits traits of neither the avant-garde nor spontaneous filmmaking. Indeed, his filmic atmosphere exudes traditionalism and epic romanticism, in that The English Patient might be described as a postmodern Lawrence of Arabia. Certainly, Minghella’s picturesque approach in this and his subsequent films compare to the great David Lean’s output. Minghella’s tone is delicate, absorbing, and trails along a passageway that never breaks or separates by unorthodox editing, flowing through flawless transitions. Bodies become shadows. Locations fade into somewhere else. Focus zeroes-in on a single object and pulls back to reveal the object has been transported entirely. Even as the story migrates between various countries in assorted times, the changeovers feel effortless and perhaps more organic than would a standard moment-by-moment succession. 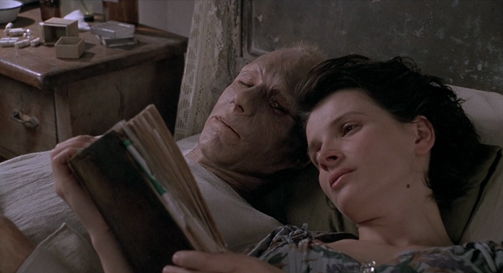 Even more curious is how much Minghella’s narrative is driven by the notion of history, how some characters find it crucial to their existence and others ignore it completely. Before and after WWII, many British explorers sought to map the Libyan Desert, searching for Zerzura, the mythical “Oasis of the Birds.” Among these surveyors was Hungarian intellectual Count Laszlo de Almásy; Ralph Fiennes plays a fictionalized version of this real-life character with complicated and remarkable nuance. In the film’s first scenes, Fiennes’ Almásy flies himself and a female passenger via biplane over the desert’s rolling dunes, seemingly wandering through the sky. Shot down by gunners, their past history and imminent fates are not yet told, and though not the beginning of the story, this moment at the beginning of the film transmits crucial dramatic necessity upon reexamination afterward.

War nurse Hana (Juliette Binoche) is not opposed to kissing a wounded patient to make him more accepting of his fate, as she often mops up the pain around her. Without warning her husband and best friend are lost to the winding-down war; she finds herself alone, her only piece of solace is “a bit of toast”—Almásy, his skin burned into a thin veil barely concealing the purples and reds of his inner flesh. In the crash, Almásy lost any semblance of his former identity, including his memory, or perhaps he has chosen to forget. Only a tattered copy of Herodotus’ history survived Almásy’s crash. His British inflection from his education abroad hides his nationality from those prejudiced against his type of name, thus he takes the title “the English patient” from the hospital’s nurses. Because he should not be moved in his state, Hana demands to care for her nameless amnesiac patient in the ruins of an abandoned Italian villa. There Almásy’s state of prolonged but inevitable death allows Hana to fall in love, and ultimately accept the loss of love in gradual steps. “I must be cursed,” she observes. “Anybody who loves me, who gets close to me, is killed.” When joined by the drifting, tormented thief Caravaggio (Willem Dafoe) and bomb disposal expert Kip (Naveen Andrews), Hana and Almásy’s quiet sanctum is disrupted. Caravaggio accuses Almásy of irredeemable past crimes, however unsure of his indictment, and Hana’s eyes drift to the confidence and sensitivity of Kip. Each resident of the crumbling villa occupies their own area, joined in a distant group that drifts about each other, waiting for their lingering woe to pass. 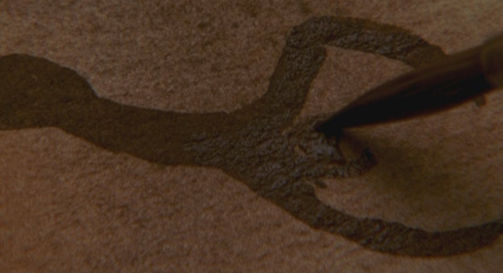 Both Hana and Almásy realize they cling to ghosts, and whereas Hana has the capability of moving on, Almásy has only his memories. Intricate and touching flashbacks cover his past in disassembled images that lead him to his deathbed. Some time earlier, a gathering of cartographers and their crew appraise a tract of sand and caves, jovial in their exploration of the unknown. Friend Geoffrey Clifton (Colin Firth) and his wife Katharine (Kristin Scott Thomas) find Almásy “rusty at social graces,” his coarse seriousness impenetrable. But the Count is likable in his cold way. Geoffrey is called away on a mission for the British government, and however unlikely at first, his absence allows Almásy and Katharine to realize they are in love. Their sudden affair is raw, sexual, and stricken by infatuation and impulse. His love is jealous. She remains shrewd when her marriage is threatened, but no less amatory. The outcome of their love shapes characters as the film progresses, forming the shattered existence of Caravaggio, among the fates of others. Of course, sometime later the film’s lovers are together in a biplane that ultimately crashes, which serves as both the film’s opening and its revelatory conclusion.

What brings Almásy to the point of his scarred and devastated self is rendered with the best of cinematic tragedy, severe romance, and the finest performances by a cast of capable actors. Fiennes must, in essence, play two roles to accomplish the film’s potency. His unbending Almásy is kneaded by Katharine into a softened inamorato, and in his fragile burned condition he is little more than a shell clinging to his disjointed recollections. Binoche embodies Hana’s frailty as if beaten by time and loss, yet resilient enough to perform the euthanasia that grants her closure. Scott Thomas lends Katharine both ruggedness and refinement. Andrews never allows his genial intensity to fade. And Dafoe makes desperation look effortless. 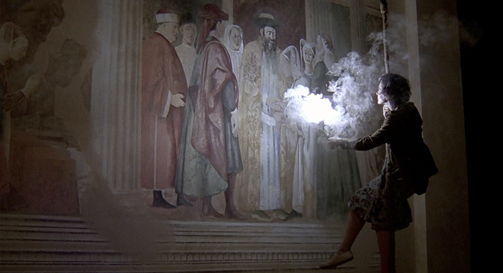 Though removed from the pathways of traditional linear storytelling, maps and charting and outlining the order of things ironically remain central themes within the film. Such schematization is lauded in the characters’ professional lives, but contradictory to their love affairs. Consider how marriage and ownership provide a prison for Katharine, justifying her escape into illicit romance. At first Almásy says he despises ownership of humanity or individuality; but when deep in love, he seeks to claim some part of Katharine as his own. He claims her “suprasternal notch” as his, perhaps finding similarities between this place on her lower neck and the curves of sand from the desert he so loves. Almásy’s divergent beliefs and actions concerning ownership underline the enduring theme of The English Patient in all its paradoxical mystery.

Inherently every person and political entity—and everything in-between—simultaneously seeks freedom within organization, impossible though it may be; the characters in the film reach outside superficial limitations to find love and hope for freedom, however they see the tightening grasp of nationalism during wartime squeezing in. While governments and their soldiers see only accents and uniforms, the story offers a cavalcade of individuals transcending such restrictions. Whether a Sikh bomb disposal expert, Canadian reporter, French-Canadian nurse, Hungarian intellectual, or British cartographer, the lovers depicted within the narrative have no regard for nonexistent border cutting off people from people. Minghella’s film makes one of cinema’s great motions toward idealistic universality, much like Jean Renoir’s masterpiece Grand Illusion from 1937. 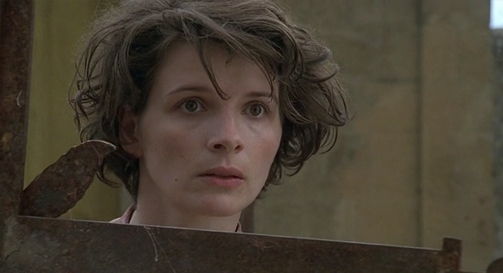 The rights to Ondaatje’s novel were purchased in 1992 by Saul Zaentz, who remains a legendary producer of The Great Novel in Hollywood. Among his accomplished adaptations, Zaentz helped bring to the screen One Flew Over the Cuckoo’s Nest (1975), Amadeus (1984), and The Unbearable Lightness of Being (1988). Each challenges the rule that the book will always be better than the movie. In all, his contributions to film are fewer than ten, but his acumen into what makes a fine novel become a superior film is unmatched. Zaentz’s industry wisdom brought him to inexperienced British filmmaker Anthony Minghella, whose résumé included the lauded romantic comedy Truly, Madly, Deeply (1990), as well as various projects for the BBC. Minghella’s insight into Ondaatje’s text was apparent in early meetings between Zaentz and his writer-director, as they both intended to safeguard the film’s credibility by avoiding mainstream casting choices and keeping faithful to Ondaatje’s complex timeline. For accuracy, the film was shot on location in Italy and Tunisia under extreme environmental conditions, many of which are depicted within the film. In some respects, their production was a disaster. Minghella broke his leg during shooting.

Few believed in the project. Minghella doubted himself, being an unproven filmmaker in charge of such a noted production. And yet, The English Patient would go on to almost universal acclaim, winning nine Academy Awards including Best Picture, Best Director, and Best Supporting Actress for Juliette Binoche. While Zaentz amassed the particulars necessary to mobilize the film, Minghella composed its distinctive pitch and orchestrated the filmic harmonies that would best translate the source material. His directing and writing styles align with Michael Ondaatje’s approach as a poetic novelist. Ondaatje puts poetry into fiction and Minghella communicates that miraculously to film, always with profound attention to the emotional reality of his characters. With The English Patient, he endeavored to prove himself with a challenging foundation, and he did, and would continue to do so throughout his short career. Minghella died in 2008, leaving behind a handful of pictures each uniquely his: The Talented Mr. Ripley (1999), Cold Mountain (2003), and Breaking and Entering (2006) each display the filmmaker’s motivation to tell stories in affecting, instinctual, intellectual, yet emotional terms, while never sacrificing the broad reach of his audience. 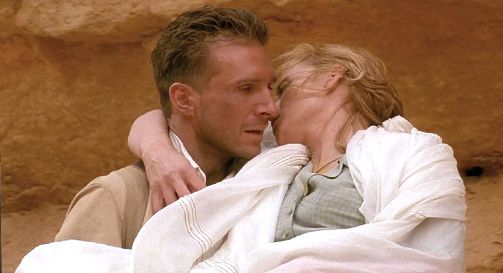 The key device of The English Patient is the film’s involving sense of grave romance, which guides every aspect of the film from formal presentation to narrative effectiveness, and increases in severity after exploring and revisiting how the story is told. The film’s tragic romance suggests a crucial truth about people drawn together and torn apart by man-made boundaries. In a profound way, it uses romance as an argument for the pointlessness of war. Minghella’s flawless perpetuation of Ondaatje’s prose emphasizes this notion through nonlinear storytelling, which in opposition of a standard linear drama presents a metaphor for the sweeping allusion that love is beyond borders. The resulting tale innovates away from cinematic homogeny, and stimulates both our compassion and thought within a heartrending, imposing drama. The rich complexity of Minghella’s approach finds an incomparable balance between classical storytelling and a modern formal treatment, and therein realizes one of the most enduring, beloved, and unique romances ever to come out of Hollywood.