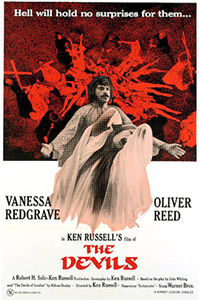 The Devils is the most iconoclastic film ever released by a major Hollywood studio. Director Ken Russell’s urgent masterpiece is overwhelmingly sublime, confronting standards of representation with its many disorienting contrasts: the sacred and profane, high and low expression, the spiritual and material, sexuality and repression, beauty and abjection. Russell’s many sensory assaults invite a passionate response, but his layers of history, literary theory, and intellectual critique fuel the picture just as imperatively. Drawing from history’s most infamous, well-documented case of demonic possession that occurred in Loudun, France, in 1634, the British director warns that religious dogma, including sexual repression, can be weaponized by political forces and abused to seize power. In achieving this, The Devils contains an unhinged formal presentation marked by a heightened, Rabelaisian grotesque reality, shown in sensationalistic detail from sexual fervor to demented acts of torture—and often commingling them with religious icons. But along with Russell’s visual excesses, based on actual historical accounts, the film is a vivid affront to the integrity of the church and state. More than its images of medieval exorcism or nuns writhing in demonic ecstasy, it is how Russell critiques and questions the institutions held dear by Western civilization that earned the film its notorious reputation and censorship. What becomes undeniable after watching The Devils is that the viewer has just witnessed the personal vision of a filmmaker unlike any other, and its story, both onscreen and off, remain among the most fascinating and troubling in film history.

The full 7,800-word essay is currently posted on Patreon. Join Deep Focus Review’s Patron community, and you’ll receive exclusive access to this essay and many other reviews and blogs published on Patreon first.