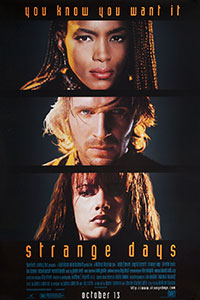 “I love your eyes,” says a character in Strange Days. “I love the way they see.” In Kathryn Bigelow’s dystopian science-fiction film, people can literally see and feel the experiences of others, but these sensations include criminal acts, sexual fantasies, female victimization, and racial violence. The 1995 film reflects and anticipates a world unraveling at the dawn of a new millennium. Outside, apocalyptic anxiety has amplified racial tensions to out-of-control extremes. Inside, people distract themselves using illegal technology that allows them to inhabit another person’s experiences as an escape. Although the techno-thriller’s shared authorship between Bigelow and writer-producer James Cameron uses contemporary events and plausible tech to render a convincing future in service of a murder plot, Bigelow shapes the film’s many moving parts into a critique of traditional storytelling motifs grounded in white male fantasies. Unfortunately, Strange Days was a commercial and critical failure. But it proved so ahead of its time, so involved in its myriad of narrative threads, so full of virtuosic formal innovations, so rich in its cultural commentary, and so sybilline in its portrait of the future that its reappraisal seemed inevitable. The film remains a stunning example, arguably the finest of her career, of Bigelow’s ongoing investigation of conventional genres through a postmodern and feminist framework.