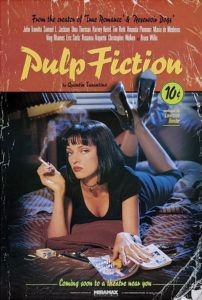 Quentin Tarantino’s dialogue provides the basis for the most unforgettable moments in Pulp Fiction, even amid scenes depicting an accidental gunshot to the head, drug overdose, fetishist leather rape, and a back-to-the-50s dance contest. Written by Tarantino and Roger Avary, the screenplay’s spoken word resonates more than the sordid underground activities of the story’s gangsters, drug fiends, a boxer, and hitmen. Laden with pop-culture references and barbed humor, Tarantino’s energetic discourse makes an otherwise appalling procession of horrific events unfurl into a dark comedy of errors. Though seemingly frivolous, Tarantino’s oddly poetic and sharply written dialogue deepens characters, enough to make his complex plotting secondary to the joy found in his stylistic prose.

Maneuvering around the point to deepen the meaning of a scene, Tarantino’s dialogue maps an outline for characters who later surprise us. Almost every scene begins with an idle conversation that slowly reveals characters whose true natures would never be guessed based on their exchange; their eventual actions rattle the audience and yet take purpose from the detailed and enthralling conversation that preceded it. The prose doesn’t necessarily move the plot forward at all times, but it adds great substance. The opening sequence shows a young couple talking about their employment options until suddenly, the audience realizes their career up to this point has been robbing liquor stores. Pumpkin (Tim Roth) and Honey Bunny (Amanda Plummer) finally burst from their seats, becoming different people than their calm and rational conversation suggested they were. As they announce plans to rob the very coffee shop in which they just enjoyed their breakfast, the frame freezes, indicating how the action remains unimportant next to the much more engaging dialogue that preceded it.

Or think about the two well-dressed gentlemen driving while they chat about the differences between Europe and America in an early scene; their conversation becomes devilishly sardonic when suddenly they stop and open the trunk to arm themselves for a hit. Tarantino introduces his hitman duo Vincent Vega (John Travolta) and Jules Winnfield (Samuel L. Jackson) this way. Then their conversation continues into the realms of television pilots and the sensuality of foot massages. Tarantino wants us to appreciate words, the naturalism-yet-eccentricity in his conversations, but in a way that slyly separates us from the topic at hand, if only for a moment. And just when the audience has lost themselves in conversation, the characters do something that shocks us. Not formulated around a sequence of events, but rather a dramatic, metaphysical progression whose foundation rests in dialogue, Pulp Fiction’s famous non-linear structure advances through a series of stories. Each story exists ostensibly as a short film, each demanding its analysis; observing their placement, however, and how they function dramatically, or not, depending on the order in which they unfold, retains the film’s greatest, genius oddity. Having employed this structure on his first film, Reservoir Dogs, wherein he used the device more for filling in the background to a cops and robbers yarn, his second film Tarantino links seemingly unrelated adventures in lower Los Angeles. Each is told in its entirety, challenging the audience to reshuffle which story actually comes after which. But if audiences arranged the stories in chronological order, they would not make sense dramatically.

Place these stories in a “correct” sequence, and suddenly Vincent Vega’s abrupt death becomes tragic, not an agreeable victory for the boxer Butch (Bruce Willis), who in turn loses the audience’s sympathy for killing the hero in the film up to that point. In truth, Butch’s fate altogether would feel like a post-climax addendum, seemingly pointless to the rest of the film, which in essence amounts to “The Adventures of Jules and Vega.” Ending where the film does—Vincent and Jules leave the diner from the opening sequence, and having set the now humbler Pumpkin and Honey Bunny loose, they walk into the morning in their bright beach clothes, pistols tucked into their dorky shorts—Tarantino completes a circular narrative, returning us to the point of origin. By way of story structure, he fabricates a happy ending for all, whereas the only truly happy ending exists for Butch. Consider how, hidden somewhere in the subtext amid Jules’ recitation of his passage from Ezekiel and the briefcase containing an awe-inspiring sight of golden luminescence (a nod to Robert Aldrich’s noir Kiss Me Deadly), there exist hints of a religious theme. This is so only because the structure allows it. These moments would be lost if limited to the chronological first half, whereas the film’s structure places these moments at the beginning, middle, and end, and helps permeate questions about that theme overall. What glorious thing from the briefcase could a gangster such as Marsellus Wallace (Ving Rhames) have coming to him? Were those bullets stopped by divine intervention? In the beginning, why does the film fade to gold when Jules and Vega execute the men who had the briefcase? There may not be answers to these questions, but then that would be the point since these questions would not be present at all without Tarantino’s structure.

The director wraps the film around itself through his configuration, containing its events within an enclosed composition, leaving the audience to contemplate everything inside a tidy casing. The placement of each short story intrigues on one level, and then the uniqueness and mystery of the stories themselves breed another level of interest entirely. As the viewer attempts to reconcile how it all goes together, Tarantino’s cinematic victory becomes absolute, as his film ignites fervent discussion about its meaning without relying on conceptual notions of non-narrative or interpretive drama. Extraordinarily, his story composition meets traditional storytelling requirements, complete with rising action, however abstract, and a thematic climax, and yet remains a non-linear enterprise. But the most memorable scenes remain those involving bravado dialogue: Christopher Walken’s brief appearance as the soldier who tells young Butch about the long and foul journey of his father’s gold watch. Butch’s taxicab confession about killing his opponent in the ring. The subtly flirtatious exchange between Mrs. Mia Wallace (Uma Thurman) and Vega. The pillow talk between Butch and Fabienne (Maria de Medeiros). The weird, baffling chat between Marcellus Wallace’s rapists. Panicky, motormouthed arguing as Vega and his drug dealer (Eric Stoltz) prepare to give an adrenaline shot to the overdosing wife of a crime boss. And Jules’ intimidating explanation to Pumpkin about his biblical farewell to those on the other end of his gun represents. None of these moments rely on action, just a demonstration of wild opinions and knowing debates, rich language, and colorful aural imagery.

What remains bizarre about the film’s success and ongoing popularity is that audiences seem to ignore its comedic appeal, favoring a reading that these are cool characters talking fashionable lingo and doing modish things. But upon closer examination, this is a film about people falling into trouble, making incredible mistakes, and rushing themselves into worse troubles, the tensions of which are relieved with laughter. Take Vincent Vega, who being “an Elvis man” plays a cool game, but who also manages to be an incomparable screw-up: While preparing for their hit, Vega and Jules expect five men upstairs, but when they find only three and fail to check all the other rooms, they face a volley of bullets for their error. Vega later shows up muted by heroin to the worrisome date with his boss’ wife. And, of course, not paying attention to the pistol in his hand, he shoots Marvin (Phil LaMarr) in the face by accident. These instances of sheer carelessness are forgiven because John Travolta makes his dialogue so silky, his actions so smooth. Judging or pitying these characters as incompetent clods never comes to mind because Tarantino has shrouded them in an atmosphere where they remain the epitome of cool, largely through their prose. Never mind their stations; how they behave and talk is what matters. The reality is, Vega’s movements seem precise and the character in absolute control, particularly during the beloved twist sequence, because Tarantino has made the audience overlook that the high-grade heroin in his needle has probably slowed him down and made him this way.

Embedded into every scene are references to Tarantino’s influences, almost none of them transparent, only a precise few readable within the context of the film. The dance sequence, for example, came about not because Travolta starred in Saturday Night Fever or the director knew audiences wanted to see him dance again, but because Tarantino wanted to acknowledge Jean-Luc Godard’s similarly themed Band of Outsiders (1964)—its French title Bande à part providing the basis for Tarantino’s production company, A Band Apart. Due to factoids like this, Tarantino has been accused of being unoriginal, though he simply reformats familiar territory for a cinematic nod to his personal favorites. What clears him with his accusers is his unabashed admission of his influences within his films, be it Lady Snowblood and Shogun Assassin in Kill Bill, Vanishing Point in Death Proof, or The Dirty Dozen for Inglourious Basterds. He reformulates, spins the idea in ways his audiences would not expect, often resulting in a post-modern treasure assembled from bits and pieces of other material but made with such expertise and class that the outcome seems singular and uniform. How he references makes all the difference; he creates a satisfying illusion of originality. He never blatantly steal or deny that the reference exists; rather, he hopes viewers will go back and revisit the source.

While the director’s foundation takes cues from a laundry list of sources, those films were never more popular until after his pictures referred to them. Through Tarantino’s nods, his films have repopularized disregarded actors, forgotten music, obscure television shows, and overlooked movies. He casts vintage players like John Travolta or Pam Grier in roles both ironic and groundbreaking, and then he watches as their careers take off once more. His choice of music includes vintage 1970s tunes like “Stuck in the Middle with You” or “Jungle Boogie,” which perfectly invigorate their scenes and immortalize themselves onto film; shortly after that, the radio stations are playing them again, and the soundtracks are selling millions. Commercials still use Dick Dale’s guitar version of “Misirlou,” which plays over the Pulp Fiction’s opening credits.

Whether Tarantino himself, his uniquely innovative film, or a combination of both captures the audience, the result is always a cultural phenomenon. After Pulp Fiction, suddenly every other movie contained chatty hitmen or obscure filmic references in the dialogue. Tarantino inspired young filmmakers to make movies like 2 Days in the Valley, Go, Lock, Stock and 2 Smoking Barrels, and Things to Do in Denver When You’re Dead—the list could go on and on. Hollywood sought to copy the formula and went to Tarantino’s literary inspiration of Elmore Leonard for help—Hollywood went and found Get Shorty, Out of Sight, and other hard-boiled crime pictures to adapt. Leonard’s Rum Punch is the source material for Tarantino’s own Jackie Brown—a similar film to Pulp Fiction, except the protagonists think intelligently before acting and rarely ever make mistakes.

Watching Pulp Fiction today requires distance from all the subsequent baggage—admirers and none-too-subtle copycats trying to do what Quentin Tarantino did originally out of ingenuity and creativity. In reverence of directors and films that he admires, Tarantino pays respect by allowing influence to incite new ideas instead of recycled ones. Through his personal style and penchant for involving prose, Tarantino makes post-modern innovation admirable in a modernist way. Dialogue remains his subject. The stories’ criminality and violence punctuate long strings of adeptly-written conversation, and like a fleshy, weighty sentence, this punctuation only emphasizes the meaning. And yet, his efforts have wonderfully evolved into being about the talk that develops after the film, as moviegoers still engage in never-ending discussions about Pulp Fiction’s narrative, structure, and the methods through which the tale is told.