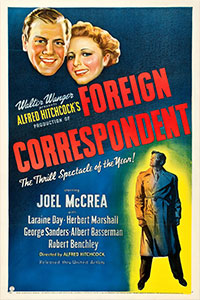 Foreign Correspondent is about a world caught up in the rumors, mounting tension, politicized repression, and uncertainty that preceded World War II. Alfred Hitchcock’s wartime conspiracy thriller makes the director’s most pronounced statement against the looming threat of Nazi Germany. Released in 1940, the film is a smartly crafted and often funny Hollywood spy yarn assembled by the crowned Master of Suspense, featuring breakneck pacing and some of the most memorable sequences in the director’s career. Nominated for six Oscars, including Best Picture, Best Screenplay, and Best Visual Effects, it could easily serve as two hours of pure escapism. Except mining the film next to other Hitchcock thrillers of the era reveals a political undercurrent that recontextualizes the director’s earlier entertainments, uncovering a vein of Hitchcock’s patriotism and anti-Nazi commentary. What follows is a historical and thematic overview that aims to situate Foreign Correspondent as a bold call to action to stop the looming threat of Nazism in Europe. By exploring how Hitchcock used the spy-thriller genre throughout the 1930s as a platform to identify Nazi Germany and fascism as a threat, and further, speak against isolationist interests in the US, the film can be seen as more than simply escapism but an entrenched anti-Nazi statement by a seemingly apolitical filmmaker.