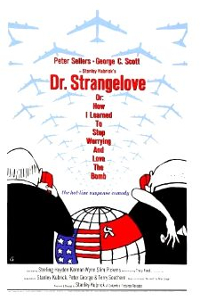 “We are simply going to have to be prepared to operate with people who are nuts.”
– President Dwight D. Eisenhower, in a 1957 discussion with his cabinet about nuclear strategy.

Stanley Kubrick directed several masterpieces but few such frontal assaults as Dr. Strangelove or: How I Learned to Stop Worrying and Love the Bomb. His most iconoclastic film resists much of the “truthful ambiguity” he sought to inject into his work, which usually invites the viewers to fill in meaning for themselves. Rather, his anti-atomic satire’s warning is unmistakable. Kubrick was interested in how people seemed resigned to the possibility of nuclear war and how they met their potential destruction by nuclear bombardment with stoic helplessness. Just as people tend to think of death as something that will never happen to them, they compartmentalize or remain blissfully unaware of how close they are to total nuclear annihilation. Humor became his alarm to wake people from their unprotesting acceptance that the human species might destroy itself. Kubrick satirizes that insane rationalization by depicting the world leaders and military personnel who preside over—and remain wholly unconscious about the inner workings of—the weapons that could one day bring about a global disaster. Dr. Strangelove is a film that hinges on a constant juxtaposition between the seriousness of human survival against the absurdity of humanity’s petty, everyday concerns. And it’s propelled by the irony that a plan designed to prevent human error backfires and does precisely the opposite. The result is one of the funniest films ever made, Kubrick’s most unequivocal commentary, and perhaps cinema’s most disturbing take on the illusion of our control.

This essay was commissioned on Patreon. Thank you for your support, Ron!

The full 5,000-word essay is currently posted on Patreon. Join Deep Focus Review’s Patron community, and you’ll receive exclusive access to this essay and many other reviews and blogs published on Patreon first.