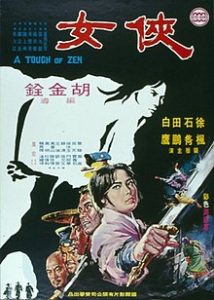 A Touch of Zen explores the boundaries of wuxia, a subgenre of Chinese martial-arts cinema usually rooted in notions of personal honor and chivalry. King Hu’s most acclaimed film—a three-hour epic of lyrical fight choreography, subterfuge, romantic entanglement, and poetic aestheticism—reaches beyond the genre’s focus on heroes and gallantry in search of something more transcendent. Its warriors perform in operatic fight sequences and often defy the rules of earthbound combat, but Hu’s contemplative imagination takes the film even further. The writer-director rethinks the root assumptions of wuxia to craft a female warrior, played by iconic actress and producer Hsu Feng, into an emblem of humanist searching. In doing so, Hu expands upon wuxia’s typical gender roles for women and posits an alternative marked by Zen Buddhism, genre variation, and a scale unseen in wuxia cinema upon the film’s release in 1971. A Touch of Zen contains enough story for two films, but by combining them into a singular, existential saga with experimental stylistic flourishes throughout, Hu created what scholar Stephen Teo hailed as wuxia’s “first true masterpiece in the genre.” At the same time, Hu’s film is also an anomaly of ambition and metaphysical searching that introduces ideas and perspectives rare to the genre, and Hu’s career, before or since.

The full 4,300-word essay is currently posted on Patreon. Join Deep Focus Review’s Patron community, and you’ll receive exclusive access to this essay and many other reviews and blogs published on Patreon first.