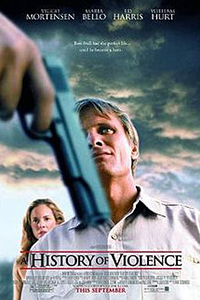 In A History of Violence, David Cronenberg peels back the skin of civilization to reveal an infection underneath. The story, about an average man with a dark secret, serves the director’s grim commentary on how the social constructs of family and community, professed to be civilized, conceal the intrinsic barbarity of human beings. At first glance, the material doesn’t resemble what cinéastes would call Cronenbergian. The invasive and gory violence often associated with the Canadian auteur, the so-called Baron of Blood or King of Venereal Horror, has been disguised by the everyday in his 2005 film. His cinematic violence is no longer situated in some science-gone-wrong conceit (The Fly, 1986), freakish externalization of internal anxiety (The Brood, 1979), psychosexual hallucination brought about by television or drugs (Videodrome, 1983; Naked Lunch, 1991), or deviant subculture of twisted metal and sex (Crash, 1996). Instead, Cronenberg explores how violence is written into our DNA, even if the surface suggests otherwise. He uses A History of Violence’s outwardly mundane characters, restrained aesthetics, and familiar scenery to present a narrative treatise on how violence plays a vital role not just in the film’s central family, but in an entire species and its various social interactions. However unassuming it appears, A History of Violence is Cronenberg’s most human and grounded film about his career-long theme of the internal becoming external.