Courtroom dramas are an arena unto themselves. Through them, justice is served on a grand cinematic stage, but then so are miscarriages of justice. These stories usually involve a series of conflicts that culminate with or revolve around a significant court case. Legal thrillers like Witness for the Prosecution (1957) or Anatomy of a Murder (1959) employ a defense attorney as a protagonist, and we follow that attorney as he builds his case strategy like finding clues to a murder mystery. In films such as The Accused (1988), we’re on the prosecutor’s side, watching as she seeks to put away a deserving criminal element. And sometimes we follow an attorney conducting a lawsuit with social or ethical stakes, such as the leads in Philadelphia (1993) or more recently Dark Waters (2019).

Whatever the case’s specifics may be, courtroom dramas, quite obviously, orbit around the courtroom and its usual trappings. Attorneys pore over legal books, evidence, and strategies to find some angle to win their case. Then they engage in over-the-top dramatics to convince the jury, often by introducing incriminating evidence or testimony that disproves another witness’ version of events. The accused looks back at their loved ones, who worry about the outcome. The judge, more often than not an older man, bangs his gavel and shouts “Order!” And he grants attorneys leeway with the standard “It’s unconventional, but I’ll allow it.” When the movie reaches its climax, it’s with some breakthrough testimony or gasp-inducing revelation, followed by a sigh of relief or shattering disappointment when the verdict comes. To an extent, their subject is the process of law, but that’s secondary to the dramatic platform of the courtroom.

While the courtroom genre has its own set of tropes, the courtroom setting sometimes appears in other genres as a dramatic device. In these instances, screenwriters use the courtroom as a grandstand for characters to declare their hidden feelings and agendas, rather than working them into a less official setting. There’s rarely anything ambiguous about a courtroom, however. Characters must be sworn in and give testimony before an audience, including the judge, jury, and anyone in attendance—including the movie’s viewers. The courtroom itself is organized like a theater or coliseum, complete with performative roles for each member of the cast. But when a courtroom scene occurs in a film that is not a courtroom drama, it’s usually because the screenwriter can’t find a better way for the characters to communicate their motivations. Instead, they’re forced to reveal themselves in a dramatically engineered manner. 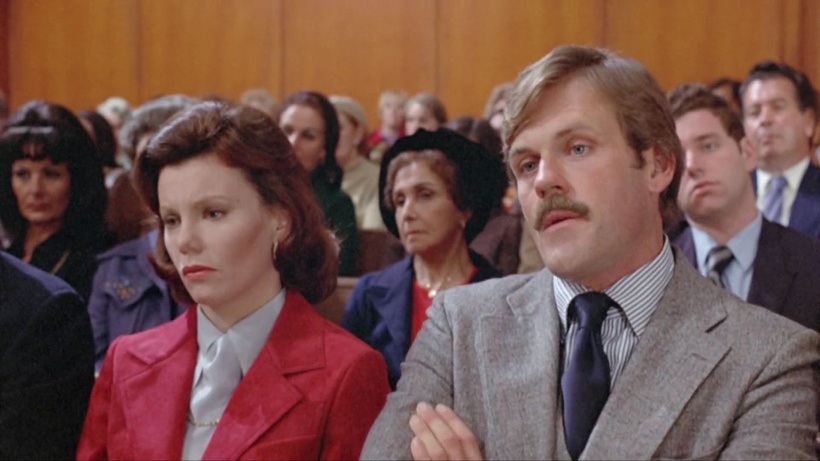 Take for example Audrey Rose (1977), Robert Wise’s supernatural horror film about a couple, Bill and Janice (John Beck, Marsha Mason), whose daughter, Audrey Rose (Susan Swift), is haunted by unseen forces. A stranger, Elliot (Anthony Hopkins), believes the girl is a  reincarnation of his daughter who died in a car accident just seconds before Audrey Rose was born. Bill and Janice have their doubts, and Elliot’s possessive behavior toward their daughter leads to criminal court. What’s at stake in the court case, besides perhaps Elliot’s freedom? Possibly Bill and Janice’s marriage, since it now hangs on whether they believe their daughter was once Elliot’s. The courtroom scene, situated in the middle of what until now has been a purely supernatural affair, serves as a dramatic device in which Janice must confess what she couldn’t before—that she believes Elliot’s story, which reprepresents a betrayal in her marriage, and, furthermore, she believes in the taboo subject of reincarnation. Through the use of the courtroom, the scene has been artificially manufactured to reach a dramatic head and give Janice a chance to speak the truth. Though, such declarations could have come out in a heightened domestic scene just as well, albeit without so much concentrated dramatic commotion.

In most cases, when a courtroom scene is dropped in the middle of some other genre offering, the result feels dramatically manipulative. It’s the sign of filmmakers struggling to find a venue for their characters to expose what they’ve been hiding and speak the truth, and the result usually stops a movie dead in its tracks. Such scenes draw out emotional revelations through a series of probing questions. They force characters to expose what they have tried to hide. They amplify tension and suspense. But they also take away from the overarching genre. Audrey Rose stops being a horror movie the moment it transitions into a courtroom drama, for instance. Consider it a pet peeve of mine, but when a courtroom scene appears in something other than a courtroom drama, my assessment of the movie drops a significant degree.

There are exceptions. The best of them appears in Leave Her to Heaven, the 1945 film noir shot in Technicolor and directed by John M. Stahl. Gene Tierney plays Ellen, whose marriage to Richard (Cornel Wilde) is marred by her obsessive jealousy. Anyone who threatens to divert Richard’s attention away from her becomes a target, including Richard’s little brother Danny, who is disabled from the effects of polio, and her unborn child, which she kills by throwing herself down the stairs to force a miscarriage. Ellen is a nasty piece of work. Even her sister Ruth (Jeanne Crain) thinks so. Unfortunately for them, Ruth and Richard have a chummy relationship, and Ellen suspects there’s something more. Ellen’s last cruel gesture is committing suicide and making it look like Ruth murdered her to claim Richard for herself. In a sequence that lasts about fourteen minutes, Ellen’s former fiancé Russell (Vincent Price), a district attorney, puts Ruth on trial for murder.

The scene has everything I don’t like about courtroom scenes in non-courtroom dramas, and yet it works incredibly well. This is due in part to Price’s performance as a man who wants to use the law to avenge Ellen, whom he believes was murdered by Ruth. He’s out for blood and hopes to prove Ruth and Richard were in love. He puts Richard on the stand and asks him to read aloud Ellen’s incriminating letter, which the viewer knows to be false, but Russell believes to be true. Afterward, there’s a one-minute unbroken shot in which Russell pummels Richard with questions about his relationship with Ellen. Stahl shoots the scene in a master shot with Russel on the left, Richard on the right, and the judge presiding behind them in the center—together, they form a kind of triangle. There’s a brief respite as Stahl cuts to a medium shot of Richard giving testimony, then another of Russell parading in front of the jury. But then it’s back to the triangle for another full minute of uninterrupted questions. 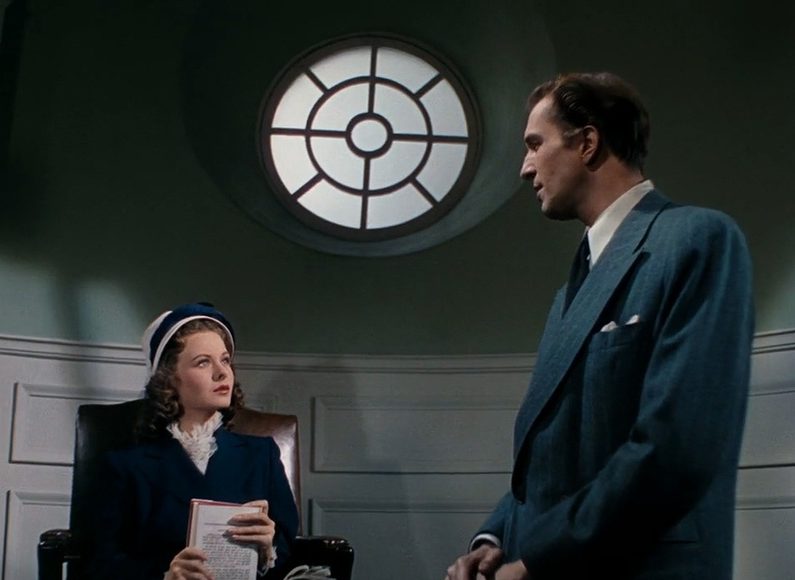 The scene is so effective for several reasons. Price delivers the tempo and volume of Russell’s questions with ferocity, putting Richard into a high-pressure hotbox. As soon as the answer leaves Richard’s mouth, Russell is on top of him with the next question, using a flat but strong and accusatory tone. It’s unrelenting. Stahl’s choice to include two minutes of the interrogative questioning—about seven minutes of screentime in all—in single, unmoving shots, intensifies the pressure on Richard. He squirms with every answer because, from the outsider’s point of view, it doesn’t look good. We feel what it must be like on the witness stand, unable to escape from the persistent questions and what seems like a grim outcome. Lastly, the scene clarifies Richard and Ruth’s love for one another, which, until this sequence, remained beneath the surface. When Russell gets Ruth on the witness stand, she admits her love for Richard with a sense of relief, only to faint afterward. Richard, in a similarly big moment, exposes Ellen’s treachery once and for all, even if it means he’s an accessory after-the-fact for not coming forward sooner.

Stahl’s calculated shooting style and Price’s jackhammer questioning technique elevate what might’ve been a humdrum scene in a different movie. But the excellent courtroom sequence in Leave Her to Heaven suggests that the problem isn’t courtroom scenes themselves but how filmmakers fit them into the surrounding drama. Stahl, best known for shooting 1930s melodramas that would later be made into sensational pieces by Douglas Sirk, uses the courtroom for what it is: a dramatically overwrought stage on which characters declare their passions. The sequence in this context works because the entire film is melodramatic in the non-pejorative sense, so the naturally melodramatic courtroom sequence fits.

Other non-courtroom dramas forget that. They employ courtroom scenes only to create a dramatically amplified sequence that represents a tonal imbalance with the rest of the film, not to mention a break in the overarching genre. Rarely do these sequences align with the film that surrounds them. When employed, they often bring the film’s narrative momentum to an unnatural peak, causing a fissure in the film’s dramatic order. But in rare instances such as Leave Her to Heaven, courtroom scenes can feel like natural outcomes and crystalize everything that preceded them.

(Note: This essay was originally posted on Patreon.)