Hard Case Crime, the hard-boiled fiction label of Titan Books, has released previously unpublished books from such classic crime authors as James M. Cain, David Dodge, Mickey Spillane, and Donald E. Westlake. They’ve also published (and re-discovered) pulp novels from the likes of Stephen King, Michael Crichton, and Harlan Ellison, each writers with their niche in another genre entirely, making their respective forays into such pulp fiction all the more interesting. With Brainquake, Hard Case Crime has found something truly unexpected: a lost novel by writer and film director Samuel Fuller, whose masculine, hard-nosed, piss-cutting style survives in his writing with all the artistic integrity that inhabited his films.

Samuel Fuller was a survivor, and lived the most fascinating life an author could live. Born in 1912, he survived as a preteen in New York City where he worked as a copyboy for the tough newspaper game. He survived as the city’s youngest crime reporter at the age of seventeen, writing about the horrors of the street. He survived eras of the Depression and Prohibition. After writing for the papers, he wrote for Hollywood as a ghostwriter, penning scripts for which he would never receive credit (and whose titles he took to the grave in 1997 at the age of 85). During World War II, he enlisted in the 1st Infantry Division of the U.S. Army, and after fighting his way through North Africa and Italy with his fellow dogfaces, he survived the storming of Normandy on D-Day, and later survived the liberation of the concentration camp in Falkenau. Fuller always said, and I’m paraphrasing, In war there are no heroes, only survivors. 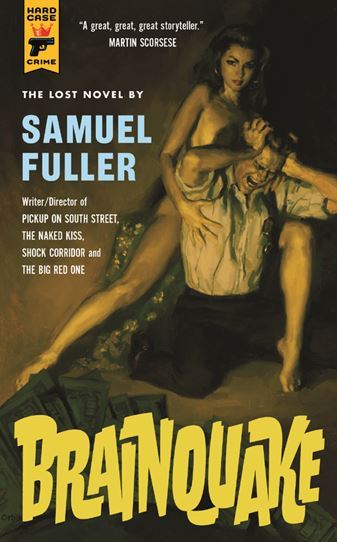 When he returned to the U.S. after WWII, he began shooting motion pictures. He shot gritty, realistic war pictures like The Steel Helmet (1951), the first film about the Korean war, or his autobiographical epic The Big Red One (1980). He put his first-hand knowledge of true crime to use on gritty yarns about life on the street: Pickup on South Street (1953) and The Naked Kiss (1964). And he pushed the envelope with the risqué undertones of his Westerns like I Shot Jesse James (1949) and Forty Guns (1957). Fuller was always testing the limits of cinema, which is probably why maverick filmmakers like Jean-Luc Godard, Quentin Tarantino, and Win Wenders admire him so much. In 1981, Fuller wrapped production on White Dog, a notorious yet insightful film about a dog who’s been trained to be racist, and the African American dog trainer who tries to de-program the racism out of the animal. The producers shelved the picture, fearing controversy. In disgust that his anti-racism film was being shelved, he left the country for France, where he stayed for nearly the rest of his life.

While in France, the cigar-chomping Fuller wrote Brainquake, a punchy little novel in his uncompromising style. Fuller had written a number of books, including the noir crime story The Dark Page (1944), but those have been published. When Fuller’s widow, Christa, contacted Hard Case Crime about her late husband’s lost novel, the resulting four-year project of moving the book from Fuller’s messy, typewriter-written, hand-edited manuscript to a publishable text resulted in Brainquake. In a way, the question is now why the novel was never published. Then again, maybe the answers aren’t so difficult to guess. Perhaps it reminded Fuller of his disastrous experiences trying to get White Dog distributed, and perhaps those memories were too painful. The book’s story certainly contains moments that would suggest a correlation.

The protagonist of Fuller’s yarn is Paul Page, a bagman for a criminal outfit, and he could represent Fuller at his height of frustration with White Dog. Paul is  a “cipher” who perfectly serves as the ideal bagman for the Mob because he has no personality, no interest in women or socializing, no need to look in the bag, and all as a result of a rare brain disorder. With the disorder, however, comes hallucinatory headaches that send him into a spout of uncontrolled behavior and pain. The story pops from the initial pages when a gunshot comes from a baby carriage and kills a man, leading Paul to finally make contact with the baby’s mother, a woman he’s been watching for some time, to protect her from anyone out there trying to get her. This yarn about love-on-the-run is filled with danger and colorful pulp characters: a sympathetic female Crime Boss, a cold-blooded hitman-priest, a towering no-nonsense woman detective, and of course a femme fatale.

It’s a little over 300 pages of can’t-put-it-down writing, with so many of the descriptions and hard-hitting scenarios evoking cinematic imagery. Indeed, Brainquake reads like one of Fuller’s edgy films from the 1950s (especially Pickup on South Street or The Naked Kiss), and has an air of fatalism and shuddering frustration that cannot help but feel biographically inspired by his White Dog troubles. For those interested in, or downright fanatical about, Fuller, Brainquake offers something new from an artist whose new material has subsided long ago. Hard Case Crime has given us a welcome return to the world and mind of Samuel Fuller, reminding us how pleasurable such straightforward, effective, dynamic storytelling can be.

Thanks to Titan Books for sending a review copy of the book. Order it from Titan’s website,